Formal talks began Wednesday between Germany's conservatives and the center-left Social Democratic Party (SPD) to form a coalition government, which is expected to be in place by Christmas. Seventy-five politicians met at noon at the Berlin headquarters of Chancellor Angela Merkel's center-right Christian Democratic Union (CDU) to hash out compromises on economic, energy and social issues -- as well as Germany's euro policy.

Wednesday's talks, which will be led by Merkel, Horst Seehofer of the CDU's Bavarian sister party the Christian Social Union (CSU), and SPD chairman Sigmar Gabriel, are expected to be relatively brief and are primarily aimed at setting the tone and structure for the coming weeks. On Tuesday, the two parties, which governed together in a so-called "grand coalition" during Merkel's first term from 2005 to 2009, set out a timeline for the negotiations that foresees a deal by the end of November. That would give the SPD leadership two weeks to sell the coalition deal to its 472,000 members in time for Merkel to be formally sworn in as chancellor in the last parliamentary session of 2013, the week before Christmas.

The entire group of 75 is required to meet weekly to approve and finalize compromises. The lion's share of negotiations, however, will take place among 12 smaller working groups, organized by topics ranging from energy policy to foreign relations to transport. These groups will be further broken down into subgroups focused on themes such as integration, internet policy and consumer protection.

Among the central topics will be an overhaul of renewable energy legislation that has led to a spike in costs and finding funds to boost public investment in research, education and infrastructure. Both issues are high priorities for the SPD, which on Sunday released a list of 10 points it called "non-negotiable," including equal pay for men and women, a common strategy to boost growth in the euro zone, and a minimum wage of €8.50 ($11.60) per hour. The German Trade Unions (DGB) has called on the grand coalition to introduce the latter within its first 100 days in office.

In addition to policy, the parties have to agree on cabinet posts. Media speculation has been swirling around the post of finance minister, currently held by Merkel's CDU crony Wolfgang Schäuble, but reportedly coveted by the SPD. A Social Democrat in the role would ostensibly tilt Germany's economic policy to the left -- most notably when it came to Europe.

Europe Watches from the Wings

Germany's partners in the European Union, meanwhile, are hoping the negotiations move quickly, so that the bloc can meet upcoming deadlines for its ambitious banking union. The prospect of a grand coalition of conservatives and Social Democrats has sparked renewed hopes in some European countries -- especially in the debt-plagued south of the Continent -- that Germany will now pursue a less rigid policy as the main guarantor for programs to save the euro. Merkel's outgoing coalition with the business-friendly Free Democrats was widely criticized in Europe for what was seen as a ruthless austerity dictate.

"It would not be wise to abandon the current path of budget consolidation, structural reforms and targeted investment," he said in an interview with German mass-circulation daily Bild. The goal of EU policy, he added, should be "to build trust and do more for growth and job creation."

Barroso belongs to the same conservative European party bloc as Merkel, and his statements can likely be understood as an appeal to the left-wing Social Democrats, who have long criticized Merkel's austerity policy in view of widespread unemployment in Southern Europe. 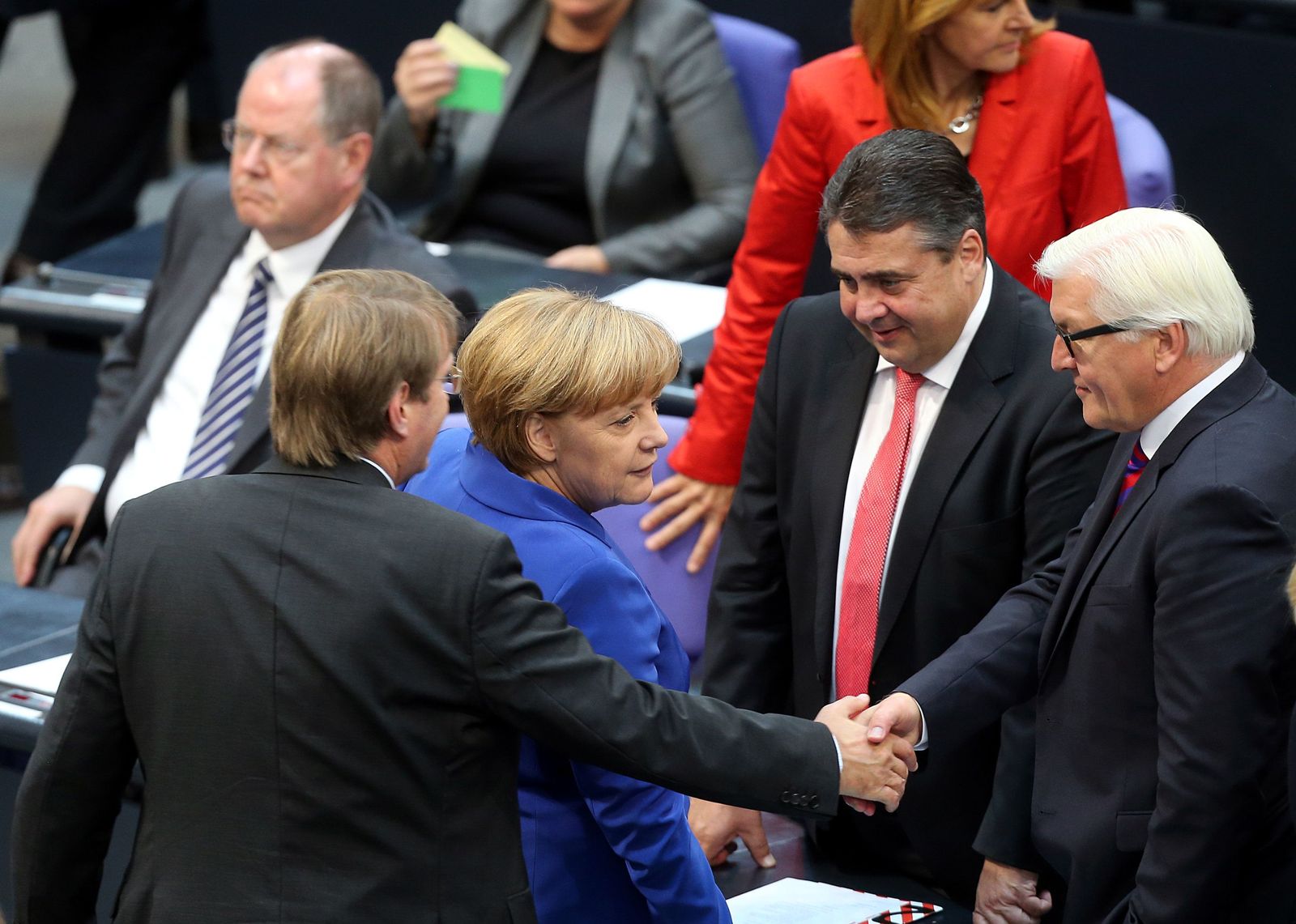 The new German government aims to be sworn in by Christmas.