If there were any doubts remaining, they were rapidly swept away on Sunday evening. Germany belongs to Chancellor Angela Merkel in a way it hasn't belonged to any other leader since the days of reunification-era Helmut Kohl. Her election victory in Sunday's general election was, in an age of myriad smaller parties, nothing short of a landslide.

Projections show that Merkel's conservatives ended up with upwards of 42 percent, their best performance in a federal election since Kohl's 43.8 percent showing in 1990, just months after East and West Germany rejoined. While she did not get her professed wish to continue governing with the pro-business Free Democrats, who failed to achieve the 5 percent necessary for parliamentary representation, she looks to have come within a whisker of something even rarer: an absolute majority.

"Yes, dear friends, as the cheering shows, we can all rejoice today," Merkel told her jubilant supporters in Berlin on Sunday night. "This is a super result."

If anything, the statement was modest. The election confirms that Merkel's nickname, "Mutti" -- or "mommy" -- is anything but sardonic. More than any other political leader in this general election, Merkel understands her country's yearning for a steady hand in a period of economic uncertainty in Europe and instability in the Middle East. And Sunday's result was a resounding expression of their gratitude. 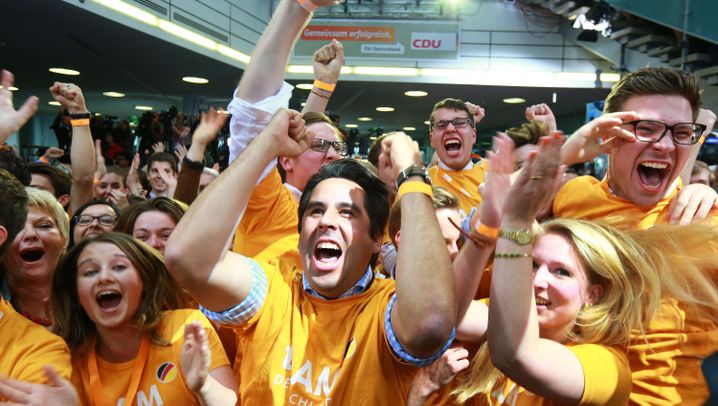 "Her success clearly stems from European and international policy," Heinrich Oberreuter, a political scientist at the University of Passau in the state of Bavaria, told SPIEGEL ONLINE. "Merkel has represented Germany at a difficult time and on all the red carpets and in her entire demeanor, she has given Germans the feeling that she's stood up for their interests."

Merkel's primary opponent, center-left Social Democrat Peer Steinbrück, had tried to attack the chancellor during the campaign for what he said was her attempt to "lull the country to sleep." Yet from the perspective of German voters, she was really keeping the demons of the euro crisis at bay. And she reaped the reward at the ballot box.

Her victory goes far beyond the borders of Germany. Already, Merkel was the strongest figure on the European political stage. With French President François Hollande struggling to gain traction in Paris and Britain having no interest in the common currency, the chancellor's voice in Berlin carried immense weight. Now, it will carry even more.

That, of course, is not a prospect that many in the euro zone find particularly appealing, especially those in struggling member states in the south. Indeed, most had been hoping at the very least that Merkel would be forced to enter into a coalition with the Social Democrats (SPD), believing that she would then have to loosen the austerity thumb screws. And she will likely still have to. Early evening forecasts that she might have won an absolute majority began looking premature. Left without a potential coalition partner on the center right, the SPD would seem to be the only one available.

Still, Finance Minister Wolfgang Schäuble went out of his way on Sunday night to reassure Europeans. "We will continue to reliably play our role as an anchor of stability, as an engine of growth and, beyond that, we will continue to hold Europe together."

Exactly what Merkel's government will look like won't take shape for a few more days. But it hardly matters when it comes to the position in which she finds herself: Germany's most-loved chancellor in decades and a leader in whom the country has vast amounts of faith.

It marks the high point of her 13 years at the helm of the Christian Democrats. When she took over the party on April 10, 2000, few thought that she would last long. The only reason she managed to leap-frog Kohl and the powerful state politicians that surrounded him was because of her courageous break from the long-time chancellor. With Kohl embroiled in a campaign finance scandal in 1999, Merkel criticized her political mentor in a piece for the center-right daily Frankfurter Allgemeine Zeitung, saying he had damaged the party. She was the first senior party member to suggest that it was time for the Kohl era, which had lasted 16 years, to end.

In 2005, the year that she became chancellor, her party's result -- at 35.2 percent -- was far below what polls had predicted prior to the vote. What followed was a grand coalition with the SPD and mumblings of discontent from intra-party rivals. Again, Merkel looked vulnerable.

But instead of wilting, Merkel was able to solidify her power. On the one hand, she proved unexpectedly adept at defanging several senior Christian Democrats who had been up-and-comers under Kohl and saw Merkel, who grew up in East Germany, as an interloper. Indeed, whereas the German press had initially handled her with skepticism, her unabashed consolidation of power in the country's male-dominated political scene won her respect.

On the other hand, though, Merkel perfected a political style that has become her trademark. In the 2005 campaign, she campaigned on the need for difficult reforms and even promised a 2 percent raise in the country's sales tax. Her party's surprisingly low result that year led her to reconsider her approach. Since then she has sought to deliver exactly what voters want -- and let others take the lead should painful decisions become necessary.

In recent years, she has moved her party sharply to the left. She abandoned nuclear power, ended universal conscription, vastly increased social benefits for families, took a (short-lived) lead on efforts to counter global warming, promised to address rapidly rising rents in major German cities and taken steps, though limited, toward improving gender equality. In short, she has made progress in several areas that had been core issues for opposing parties and earned a broader following as a result.

A Victory for Mutti

Mostly, though, she has kept the ravages of the euro crisis at bay and kept the German economy humming along right through the worst of it. Unemployment has plunged, exports have remained strong and the country's outlook in 2014 is bright, even as several other euro-zone member states continue to struggle.

There is, of course, plenty to criticize. She has been blasted, by Steinbrück among many, many others, of not being honest about what the euro crisis might ultimately cost German voters. She has also shied away from making the far-reaching reforms to the common currency architecture that many believe is necessary. The ranks of Germany's working poor are growing.

But with Germans largely satisfied with the direction in which their country is headed, Merkel's popularity ratings were sky-high entering this election year and they have hardly budged since. And Merkel, of course, was clever enough to recognize the signs. Instead of running the kind of issues based campaign that fits best with Germany's parliamentary democracy, she took a chapter out of US politics. She ran on her personality. Her posters were light on message and heavy on empty slogans such as "Merkel: A Chancellor for Germany" or "Successful Together."

The bet, as Sunday night showed, was wildly successful. Germans don't want change. They want Merkel. And they want what Merkel has become: Mutti. 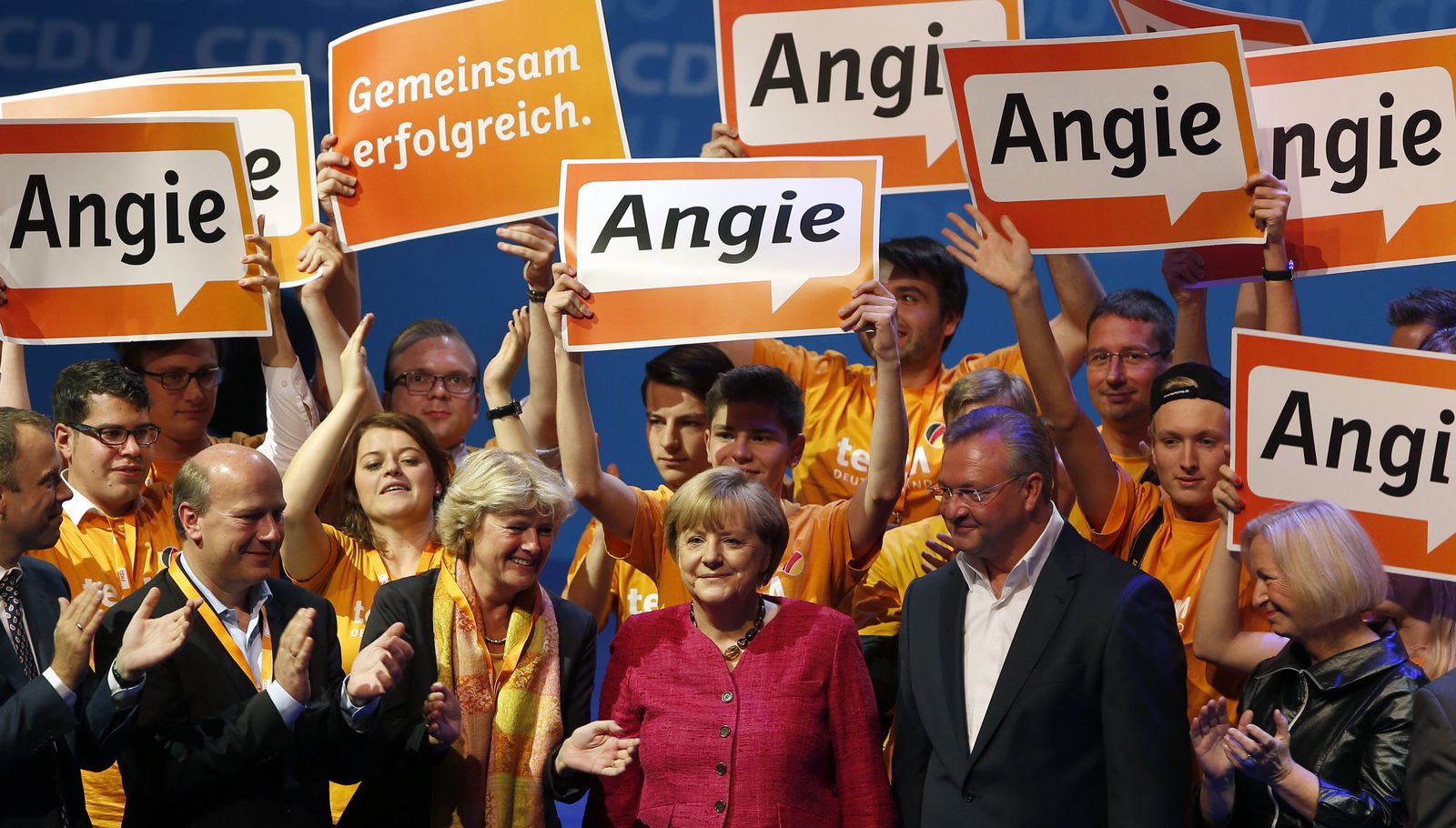