German parliamentarians on Thursday approved the planned expansion of the European Financial Stability Facility (EFSF) with 523 voting in favor, 85 against and three abstentions.

The bill's passage is a vital step in euro-zone efforts to increase the fund's lending capacity from its current €250 billion ($338 billion) to €440 billion. Germany's share of guarantees for the fund will rise from €120 billion to €211 billion, though several other euro-zone parliaments must still vote on the expansion.

The result also means that Merkel can breathe a sigh of relief. There had been concern that renegades within her center-right coalition could mean that Merkel would be forced to rely on opposition votes to pass the legislation. Had that come to pass, her power would have been severely curtailed.

In the end, however, 315 parliamentarians from Merkel's conservatives and from her junior coalition partners, the Free Democrats, voted in favor of the EFSF expansion. Fewer than 311 would have limited Merkel's power by making her reliant on opposition votes and indicating that she could no longer rely on the support of her own coalition.

Additional Powers for the EFSF

European Union leaders agreed to expand the EFSF in July once it had become clear that the fund as originally designed would be insufficient should the debt crisis which has befallen Greece continue to spread. The fund was also granted new powers, enabling it to buy up bonds from debt-stricken euro-zone countries in order to keep their borrowing costs down. So far, the European Central Bank has been tasked with such purchases. In addition, the EFSF will be able to indirectly bail out banks that run into trouble as a result of overexposure to bonds from indebted states such as Greece.

The expansion of the EFSF still faces some significant hurdles, with several countries left to vote. Most significantly, Slovakia has threatened to reject the expansion -- a move which, given the need for unanimous approval, could torpedo the enlargement of the fund. France passed the expansion several weeks ago and both Finland and Austria passed it earlier this week.

The reform of the EFSF is just one step in the ongoing effort to prevent the common currency from collapsing as a result of the sovereign debt crisis which has struck several euro-zone member states. On Wednesday, the European Parliament passed far-reaching measures to strengthen the Stability Pact in an effort to prevent lax fiscal policy in euro-zone capitals.

Later this autumn, a second bailout package for Greece, worth €109 billion, is to be voted on. And at the beginning of next year, the German parliament will have to vote on the European Stability Mechanism (ESM), the permanent euro backstop which is set to replace the EFSF in 2013.

Several analysts, however, have said that even if the EFSF is expanded to €440 billion it still won't be large enough to convince investors that Europe is serious about stopping the ongoing debt crisis. Indeed, this week many European leaders have indicated that further changes to the EFSF may be in the offing.

One idea involves leveraging the fund by allowing it to borrow heavily against its assets, thus increasing its impact to as much as €2 trillion. Others have intimated that the fund could be further expanded.

Both moves, however, are not without risk. And German politicians have been quick to deny that the second option, that of further expansion, is on the table. Both Merkel and Finance Minister Wolfgang Schäuble have clearly denied that such an expansion is possible. In the floor debate on Thursday, Schäuble reiterated his opposition, saying that an increase to Germany's €211 billion guarantee "is not up for debate."

Horst Seehofer, head of the conservative Christian Social Union, also said on Thursday in an interview with the Süddeutsche Zeitung, that his party would not agree to further expansion.

Schäuble, however, has said that leveraging is very much a possibility. In an interview on German radio on Thursday morning, he said that "we will of course use this fund, as we have said in the past, as efficiently as possible."

But Rainer Brüderle, floor leader of the Free Democrats, said that the EFSF will not be strengthened through leveraging. "That will not happen because the text (of the law) is clear on that," he said during the pre-vote debate.

Berlin is concerned that, should it pledge additional guarantees to help indebted euro-zone countries, its own credit rating could be at risk. Standard & Poor's indicated as much this week. But S&P also suggested that extensive leveraging of the EFSF could likewise have a deleterious effect on Germany's credit rating.

Still, stock markets across the world have risen this week on comments over the weekend and earlier this week indicating that the EU was planning to "maximize the impact" of the EFSF. On Thursday, the euro rose rapidly against the dollar in early trading on the expectation that German parliament would pass the EFSF expansion bill. 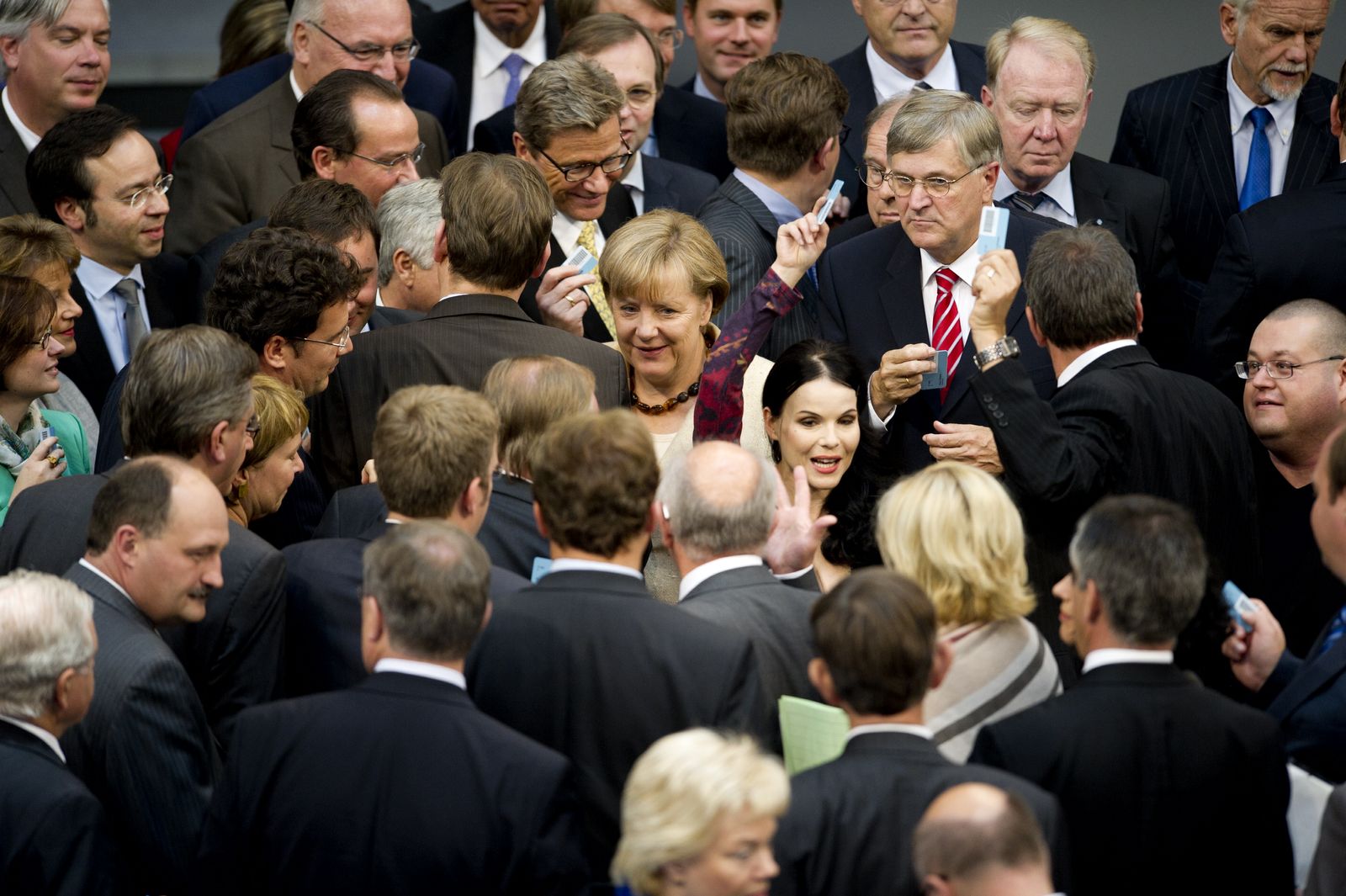 German Chancellor Angela Merkel casting her vote on the expansion of the EFSF on Thursday in German parliament.