Somewhere, millions of French voters are smiling wryly. Having given unpopular President Nicolas Sarkozy the boot last year in favor of François Hollande, France was expecting big things. Instead, the newcomer's tactics of trying to spend his way out of trouble have backfired, with unemployment soaring, factories shutting down and some of the people who were supposed to pay for Hollande's policies -- the rich -- deciding they have had enough and fleeing the country to escape the sky-high taxes. And now Germany, it seems, has its own Hollande in the form of Peer Steinbrück.

The chancellor candidate for the center-left Social Democratic Party (SPD), laid out his plans for a 100-day program to begin immediately should he beat the odds and emerge victorious against incumbent Angela Merkel in the federal election on Sept. 22. His proposals include establishing a national minimum wage set at €8.50 ($11.24) per hour, raising taxes for top earners and putting limits on rent increases.

A minimum wage, he believes, would strengthen purchasing power and also provide relief for social funds because those who currently earn less are dependent on handouts. Currently, there is no legally mandated national minimum wage -- many industries have negotiated their own verison, and paying workers an "immoral wage", i.e. one that is unfairly low, is illegal.

Those earning more than €100,000, meanwhile, would see income tax raised from 42 to 49 percent -- the SPD has been hot and cold on tax hikes in recent weeks -- and a wealth tax would also be reintroduced.

Controversial benefits for parents wanting to stay at home with their kids would be abolished, with the money spent on childcare facilities instead, and dual citizenship for people of foreign origin would finally be allowed, removing the need for their children to have to pick between Germany and the country of their parents. In adition to domestic issues, Steinbrück also re-emphasized his intention to press ahead with the European banking union plans.

Merkel is against a single minimum wage for all, believing the current model works better, and she has also come out against tax hikes.

But her opponent has accused her of standing still, saying that no one knows exactly what she wants for Germany and Europe. "It is very much a policy of vagueness," he argued.

In truth, of course, Steinbrück is doing everything he can to differentiate his party from Merkel's ruling Christian Democratic Union (CDU). The SPD is behind in the polls, currently scoring at 20 to 25 percent, while the CDU and its Bavarian sister party, the Christian Social Union (CSU), are between 39 and 41 percent. The German voting public seems to be listening to their inner caution and adhering to "better the devil you know."

That effect is also very much to the fore when it comes to the candidates themselves. Merkel is still widely seen as a safe pair of hands in troubled economic and political times. In the latest Emnid poll for the Bild am Sonntag newspaper, 54 percent of respondents said they would cast ballots for Merkel if the chancellor was voted for directly. That figure drops to 26 percent for Steinbrück.

The live TV debate between the two on Sunday is perhaps his last big chance to make an impression, and he will be hoping for a repeat of 2009 when Merkel fared badly in front of the cameras against the previous SPD candidate, Frank-Walter Steinmeier, even though ultimately it proved a fruitless victory as the party suffered a heavy defeat in the subsequent election.

An Engaging and Intelligent Speaker

It's not all doom and gloom, of course. Steinbrück is an experienced economist and politician, including stints as German finance minister between 2005 and 2009 -- under Merkel's chancellorship in the grand coalition -- and before that as governor of the large western state of North Rhine-Westphalia. He is also an engaging and intelligent speaker.

But in his battle to stand out as a genuine alternative to the status quo, his jump to the left may well end up alienating many among the millions of voters -- both undecideds and former supporters -- who he is targeting.

While the situation in France, where the economy has been in steady decline for a number of years irregardless of who has been in charge, cannot be compared directly to that in Germany, many voters will make the link between a high-spending center-left government and the woes currently being suffered by their neighbors to the west.

The wry smiles of the French aren't just because they see history repeating itself -- but rather because they know the chances are that the Germans won't make the same mistake. 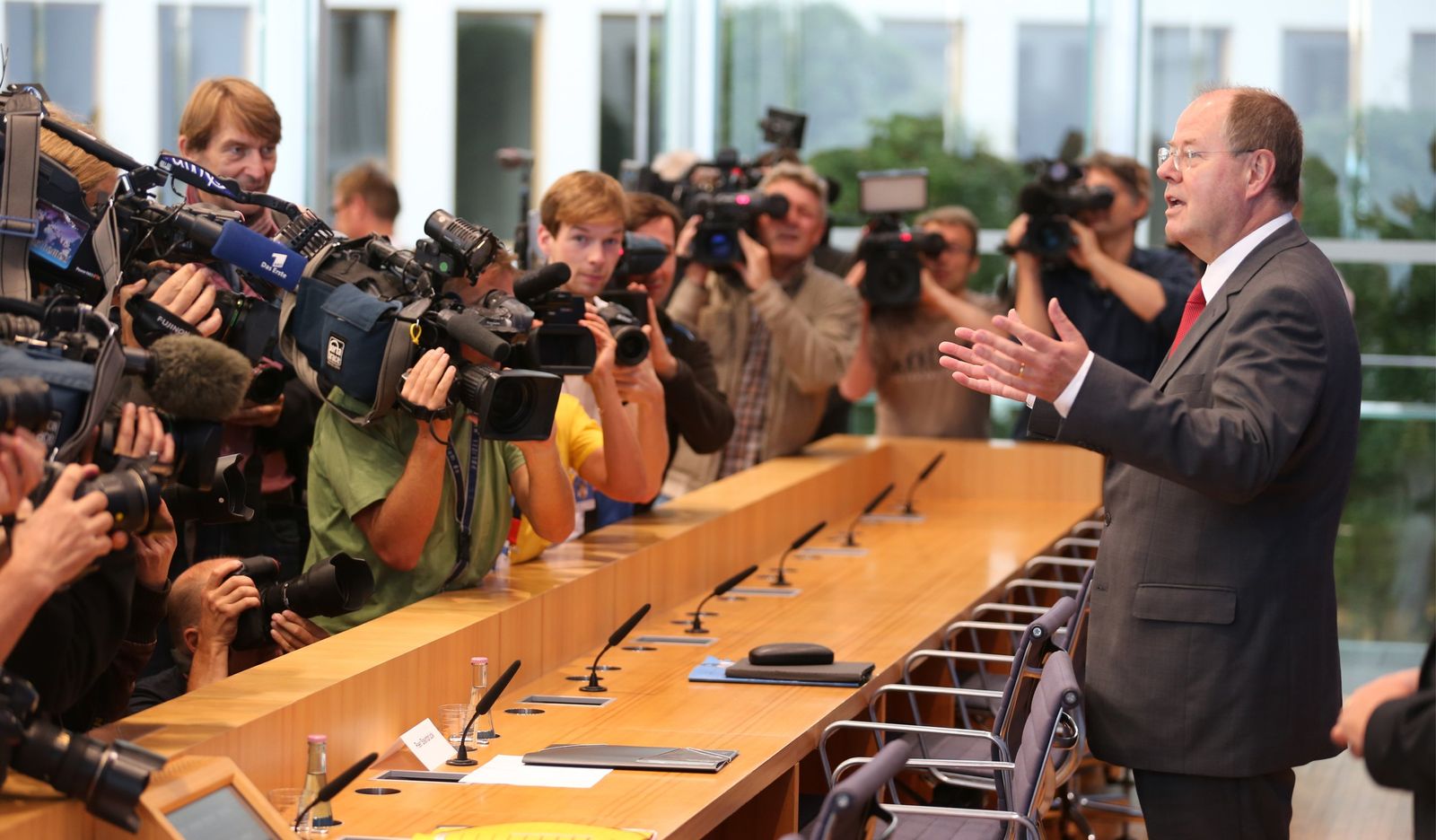