Vows of loyalty tend to have a limited shelf life with Angela Merkel. Just four months ago, the German chancellor was still gushing about the things her conservative Christian Democratic Union (CDU) shared in common with its junior coalition partner, the business-friendly Free Democratic Party (FDP). No other political force, she said, was as closely related to the Christian Democrats as the FDP. "That's why I pushed for this coalition, and that's why I will do it again," she said.

Now, though, following her party's election setback on Jan. 20 in Lower Saxony, Merkel has taken a different tone -- one that includes not a whiff of sympathy. A week ago Monday, she announced an election campaign in which each party "would fight for itself and for its votes."

Merkel's CDU is in a state of shock. With its election defeat in Lower Saxony, it has not only lost control of yet another major German state, after stinging losses in North Rhine-Westphalia, Baden-Württemberg and Schleswig-Holstein. It has also lost a state leader in outgoing Governor David McAllister whom many in the party considered to have leadership potential for the era after Merkel. With a clear opposition majority now in Germany's upper legislative chamber, the Bundesrat, Merkel's government could now have trouble passing new laws.

It is not a good start to the election year. Indeed, despite Merkel's high popularity rankings and her party's healthy state in polls, it is conceivable from today's vantage point that Merkel could lose power when Germans go to the polls, which is tentatively scheduled to happen on Sept. 22.

Only One Party to Blame

The CDU already knows today who to blame if that should happen: The FDP. Part of the reason for the CDU's poor showing in the state was that many core CDU voters cast their ballots for the FDP to ensure that the anemic party would manage to make it over the 5 percent minimum for representation in state parliament. It was a bit of strategery hinted at by McAllister himself -- and it gave the FDP more votes than the CDU had bargained for. While besieged FDP leader Philipp Rösler got to keep his job, the CDU has ruled out pursuing a similar course come September.

Merkel now also faces an additional problem -- namely that popularity isn't everything. Polls showed that 68 percent of voters in Lower Saxony were happy to have McAllister as their governor, but only 39 percent were pleased with the CDU-FDP coalition government in the state. Ultimately, aversion to the FDP led swing voters to abstain from casting ballots for the CDU. And the state vote has shown no signs of giving the FDP a boost on the national level. The latest polls show the party only attacting support of 4 percent of voters, suggesting it still runs the risk of failing to land seats again in parliament.

Leading CDU politicians fear that the Lower Saxony scenario could be repeated on the national stage. Their worry is that, even as Germans want Merkel as their chancellor, they are wary of a repeat of the CDU-FDP government. Throughout its term, the parties have fought very publicly on policy issues and found precious little common ground. The FDP has also struggled with internecine power struggles that have seen one party leader (Foreign Minister Guido Westerwelle) have to step down from that roll. His successor Rösler, who is also economics minister, remains highly vulnurable.

The party's decline has been so dramatic that the influential Süddeutsche Zeitung this week described the FDP as being about as "unpopular as athlete's foot and halitosis combined."

Pollsters warn that the FDP's weak position could endanger Merkel's ability to form a majority on issues of strategic importance. One recent poll found that almost 60 percent of German voters believe the CDU-FDP coalition should not be re-elected.

"Contagion," the very word used in the euro crisis to describe fears of the debt crisis spreading from one country to another, is now being deployed within the CDU to express fears that the FDP's ill fortune could soon beset the conservatives. And it puts Merkel in a pickle. On the one hand, she doesn't want her party to get bogged down by the FDP's travails. On the other, though, she doesn't want to create the appearance that she is rejecting the very coalition partner she is currently working together with in government and to which she has no clear alternative. Although Merkel governed from 2005-2009 in a so-called grand coalition government together with the Social Democrats, the SPD and the Greens will claim right up to election day that they are not interested in governing together with the conservatives. Indeed, lead SPD candidate Peer Steinbrück has made it clear that he will not take a seat at the cabinet table should his SPD become the junior partner in a Merkel-led grand coalition.

This week, leaders of the CDU and its Bavarian sister party, the Christian Social Union (CSU), with which it shares power in the federal government, are meeting to discuss a possible strategy for the election year. Within the CSU camp, leaders are pushing for the Union, as the CDU/CSU grouping at the national level is referred to, to campaign hard against the SPD and Greens. And what about the FDP? It's better to ignore the party, they argue. CSU General Secretary Alexander Dobrindt has also warned the FDP against seeking to gain conservative votes in the way it did in Lower Saxony in order to save its seats in parliament.

Meanwhile, one of Merkel's closest allies in the Christian Democratic Union, Labor Minister Ursula von der Leyen, is also calling for the party to be tough in its dealings with the FDP. In the Lower Saxony vote, von der Leyen noted, the parties merely swapped votes. "That's not enough. The Union and the FDP need to attract voters beyond their own political bases," she says.

The labor minister would like to see the party aggressively court SPD voters, favoring in particular the introduction of a national minimum wage (which Germany does not have) and a gender quota. Such positions are no longer anethema to a CDU which has slid to the left in recent years. "It is within easy reach, and we must have equity," von der Leyen says. "That's why the message can't be (economic) 'growth' alone." But the FDP has been adamently opposed to such policies and compromise has been impossible.

In addition, in multiple interviews given after the Lower Saxony debacle, CDU politicians have said they would like to distance the party in the campaign from the somewhat liberatarian FDP's free market policies and instead promote the CDU's vision of a social market economy. The slogan of the CDU's most recent party congress at the end of 2012 was, "A Strong Germany -- Opportunities for all." The Süddeutsche Zeitung newspaper wrote that this suggested a party campaign that would focus on both a "prosperous economy and social policies" for average Germans, placing the party even closer to the positions held by the center-left SPD.

Is Merkel Steering Towards the SPD?

Frustration with the FDP is so great at this point that many in the CDU favor the model adopted by the party in the southwestern German state of Saarland. A year ago, Governor Annegret Kram-Karrenbauer of the CDU kicked the chaotic state chapter of the FDP out of her government and formed a new coalition with the SPD. This time, the politician is warning against relying on the FDP even at the national level. "We need to focus on our own strengths," she said.

But this path isn't uncontroversial either. The further the CDU distances itself from the FDP and emphasizes a "social" element, the louder the calls are likely to grow that Merkel is trying to subtly steer a course towards a grand coalition.

The economic wing of the CDU is anathema to another alliance with the SPD. "Instead of chasing after voters from the SPD and the Greens," CDU member and Saxony Governor Stanislaw Tillich said, "we should take care of the people who have turned their backs on us in (recent) years."

Günther Oettinger, the EU's energy commissioner and a senior member of Merkel's CDU, offered similar sentiment, arguing it would be wrong to run an anti-FDP campaign.

"Those who want to see Merkel as chancellor need the Union and the FDP," he said. 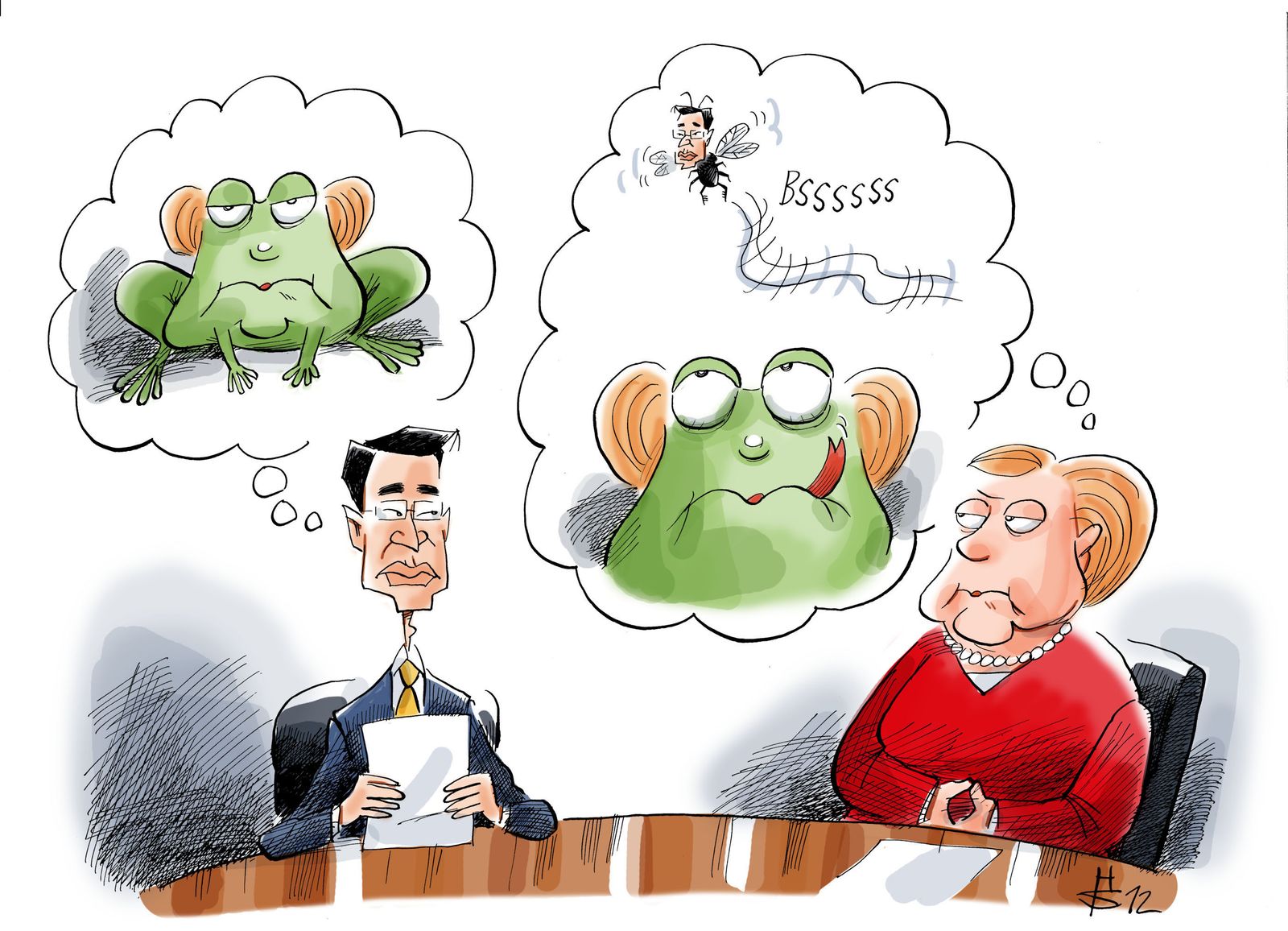