Angela Merkel beams and nods supportively at the flocks of women in business attire who are crowding the wide staircase of the Chancellery. It's a good picture. In fact, it's a little too good to be true. Merkel herself admitted as much only moments ago in the conference room, when she said one could easily get a false impression -- the impression that Germany is doing just fine when it comes to promoting gender equality and bringing more women into business leadership roles.

Over a hundred women have followed Merkel's invitation to this "women's summit" to share their personal career experiences with the chancellor. A lot of them have already made it as leaders in business, science and culture, while others are still working their way up the ladder. They're chatting, laughing and having a good time, and the happiest of the bunch is undoubtedly Merkel herself. She contently assumes her usual position, pinching her fingers tightly together in the awkward diamond shape that has become a trademark of her persona.

Merkel does not seem too concerned about the false impression she's casting at this moment. Recently, the serene mood of the chancellor's ruling coalition has been shaken by painful debates surrounding equal opportunity for women -- gender quotas in management boards and state payments for stay-at-home parents, to name a few. But Angela Merkel knows about the power of pictures, and in the end it will be this snapshot of her surrounded by Germany's most promising women that voters will remember.

The message is clear: Merkel is taking the gender issue into her hands, and German women couldn't be happier.

The summit was defined by big symbolism and little content. That's how most of the chancellor's appearances turn out these days. On Monday she tried reclaim her role as Merkel the Environmentalist at the Petersberg Climate Dialogue -- although she her previously favorite issue has long been on the backburner. Instead of taking political stances, Merkel prefers to chat with Berlin high school students about Europe, or to meet up with voters in a Google "hangout" for softball questions on integration policy. Or she grants us a glimpse into her personal eating habits, as she did in a recent interview with the women's magazine "Brigitte." Next week, she's presenting the 1973 East German film "The Legend of Paul and Paula" at the German Film Academy, and giving a talk on how the movie shaped her as a young woman growing up in the Soviet Bloc.

Clear Message from the Opposition

Merkel's campaign schedule is symptomatic of the state of her coalition government. The Christian Democrats (CDU) and Free Democrats (FDP) have largely stopped governing, instead devoting themselves entirely to managing their numbers in opinion polls. So far they have given the public no hint as to what the next four years might look like if the CDU remains in power. Their message is simple: Deutschland is doing well, so why change anything?

It's still unclear whether that will be enough to convince German voters. The center-left opposition Social Democrats (SPD) and Greens have already made their campaign platforms public. Their plans to raise taxes may be controversial, but at least they're taking a clear stance on issues. All we know about the plans of the CDU and FDP is that they oppose anything suggested by the opposition.

The CDU and its Bavarian sister party, the CSU, have not published a single sentence about their current policy plans, instead waiting to release their platforms until the end of June. Meanwhile anxiety is growing. After a recent meeting with CDU General Secretary Hermann Gröhe, the party's caucus of economic experts was reportedly shocked by the lack of content he had presented. The FDP, Merkel's preferred coalition partner, approved a campaign platform at its party convention over the weekend. But the meeting yielded few concrete ideas, except for an unspectacular resolution on a minimum wage, which they had categorically rejected up until now.

The minimum wage concession shows that as elections draw closer, even the Free Democrats are willing to compromise. The CDU and CSU lost their clear course a while ago, and it will prove hard to recover after so many amendments and policy changes during their current term. Internal debate of a legally mandated gender quota is still continuing under the rebel leadership of Labor Minister Ursula von der Leyen.

A Lot Can Happen in Four Months

The gender quota battle has shaken Merkel. It upset her comfortable do-nothing strategy. In the future, the party is aiming to keep quiet any internal strife and avoid uncomfortable issues whenever possible. Fracking is a good example. In late February, Environment Minister Peter Altmaier and Economy Minster Philipp Rösler drafted a law to regulate the controversial gas extraction method, and were reportedly pushing for immediate action. To this day nothing has been done on the issue. The chancellor prefers to sidestep such delicate matters until after elections out of fear of a voter backlash.

Some things are beyond Merkel's control. When Uli Hoeness' tax scandal began to dominate the headlines, Merkel quickly distanced herself from the Bayern Munich soccer team president. But when the CSU's recent nepotism scandal surfaced, she could do nothing but watch with dismay. The popularity of the CDU-CSU faction dropped noticeably in some opinion polls.

So should Merkel be alarmed? So far she is still miles ahead of SPD opponent Peer Steinbrück, in spite of the party's recent assertions that their catch-up race had finally begun. Based on recent numbers, such an assessment is extremely optimistic. But there are still four months to go until elections -- a lot of time to fill with token politics.

Even Merkel's successful women's summit eventually had to give way to a few poking questions. "Ms. Chancellor, have you actually heard anything new today?" one woman asked, not expecting an answer. Another interrupted Merkel during her closing speech to question her on future plans for promoting equal opportunity. For a moment Merkel looked jarred, then she recovered adding with a hint of annoyance. "Well, I'm not here to promote my party program." 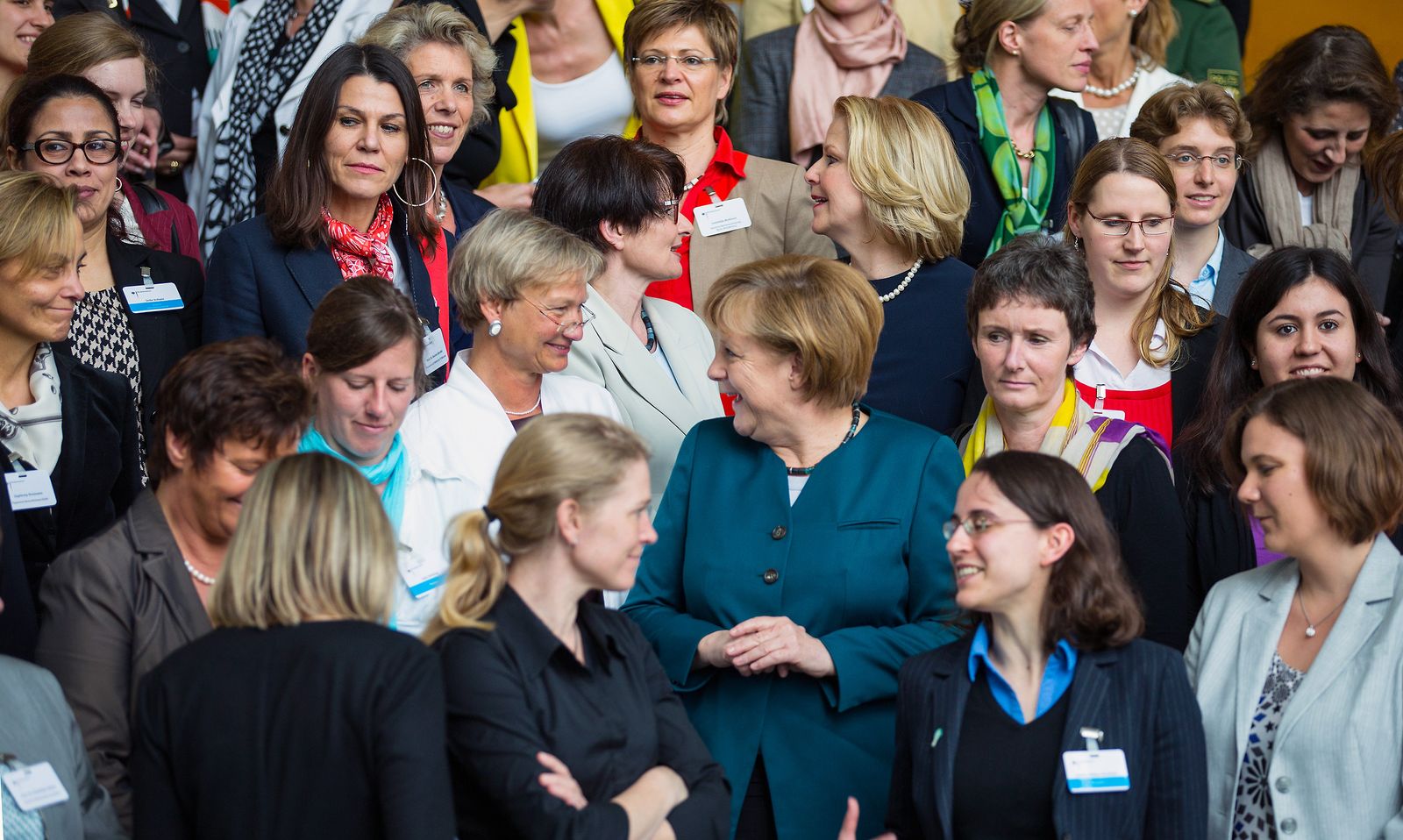 Merkel's summit for women in leadership at the Chancellery was more a photo-op than a substantive event.