After five weeks of talks and 17-hour, all night negotiations, the parties seeking to form the next German government reached an agreement early Wednesday, with Angela Merkel poised to begin a third term as chancellor. Merkel's conservative Christian Democratic Union (CDU), its Bavarian sister party, the Christian Social Union (CSU), and center-left Social Democrats (SPD) agreed on the language of a contract stipulating the policies they would pursue over the next four years. The heads of all three parties signed the 185-page agreement Wednesday morning.

The deal won't be completed until it is put before a vote of the roughly 470,000 members of the SPD on Dec. 6. The outcome of that vote is uncertain, but the Social Democrats have won important concessions from the conservatives that could make it easier for party boss Sigmar Gabriel to sell it to the party base.

"It was a wonderful result," said a jubilant Peter Altmaier, a member of the CDU and Germany's current environment minister. "The CDU's fingerprints are all over this deal," said CDU General Secretary Hermann Gröhe. "This an achievement we can present to our members with great conviction," said Thomas Oppermann, the head of the SPD's parliamentary group.

Merkel's conservatives and the SPD, generally arch political rivals, governed together twice before in what is known as a grand coalition, most recently between 2005-2009, but this time a number of contentious issues meant difficult negotiations right up to the very end.

Although Merkel emerged as the clear winner in the Sept. 22 election, her previous junior partner, the Free Democrats, failed to gain enough seats to remain in parliament, which forced the chancellor to seek a new coalition. She initially spoke with both the Green Party and the Social Democrats but quickly expressed a preference for the latter. Initially, 66 percent of Germany supported a grand coalition government, but after weeks of protracted negotiations between the Christian Democrats and Social Democrats, that figure has since fallen to 55 percent, with a full 43 percent preferring new elections.

The most divisive issue was that of introducing a statutory minimum wage in Germany, where wages are generally set by various industries. Many Christian Democrats had opposed establishing a minimum wage, but in the end, a compromise was found through a delay in implementing the deal. Under the agreement, a blanket statutory minimum wage of €8.50 per hour will be introduced across the country. However, the deal does include some exceptions as well as transitional periods, though any exceptions would then be lifted as of January 2017.

The minimum wage compromise could prove extremely helpful to Gabriel in convincing SPD members to back the new government. The last grand coalition left a bitter aftertaste for many SPD members, who felt the conservatives always had the upper hand. The party also lost voters during the 2009 election as a result. But the minimum wage deal is expected to send a strong message to the party base. It will also be popular with some voters in states that were formerly part of East Germany because it will eliminate legally permissible lower wages in some areas there. But it's a bitter pill to swallow for conservatives, who believe it eliminates one of the few competitive advantages enjoyed in some places in the east.

No New Taxes or Debt

Both sides seem to be happy with their deal on pensions, though. The Christian Democrats had wanted an increase in pensions for mothers who had worked part time or taken time off after giving birth to children and risked much lower pensions and old-age poverty as a result. Under the deal, the new pension benefit would apply to "all mothers or fathers" who raised children born before 1992.

Meanwhile, the SPD succeeded in getting the Christian Democrats to agree to allow Germans who have worked for 45 years and paid into the state pension system to retire at the age of 63 instead of the legal retirement age of 67, without any penalty, starting on July 1, 2014. In addition, a special pension is planned for low-wage workers of up to €850 per month starting in 2017. A number of other changes to the pensions have also been agreed, but the financing of what is certain to be billions of euros in additional costs remains an open question.

The parties also agreed to expand the country's use of renewable energies, with a goal of a 55 to 60 percent share of all energy coming from clean sources by 2030. The conservatives had pled for 50 to 55 percent, whereas the Social Democrats had wanted 75 percent. Government investments in new wind parks as well as conventional power plants will be based on that target.

All sides also agreed to review the possibility of levying an annual toll charge for foreign drivers who use German autobahns -- a highly controversial provision that had been one of the CSU's key demands. The language has been left deliberately muddled in the contract and it is uncertain whether it will ultimately be implemented.

In another important concession, the conservatives have agreed to the Social Democrats' demand that children born in Germany to immigrant parents be permitted to have dual citizenship. Under current German law, these children, largely of Turkish descent, are forced to choose one when they turn 23. The SPD failed, however, to push through the right to dual citizenship for other groups.

On another hot-button issue, that of same-sex marriage, neither party prevailed over the other. They agreed merely to "swiftly" implement a recent ruling by the country's Constitutional Court that allows the partner of a gay parent who has adopted to also adopt that child. It was the first in a series of rulings in Germany many believe will ultimately lead to equal marriage rights for both heterosexual and same-sex couples. But the contract didn't go further, stating merely, "We will work towards ending existing discrimination against same-sex life partnerships and people on the basis of their sexual orientation in all areas of society."

In terms of the structure of the new government, the Social Democrats are expected to receive six cabinet posts, Merkel's CDU will get six minister posts and the CSU three.

The next step comes on Dec. 6, when members of the SPD party base are to vote on the coalition contract. Results are expected by Dec. 14. If everything goes according to plan, Merkel could then be elected as the next chancellor on Dec. 17. If the SPD rejects the contract, however, Merkel may be forced to negotiate a government with the Greens. 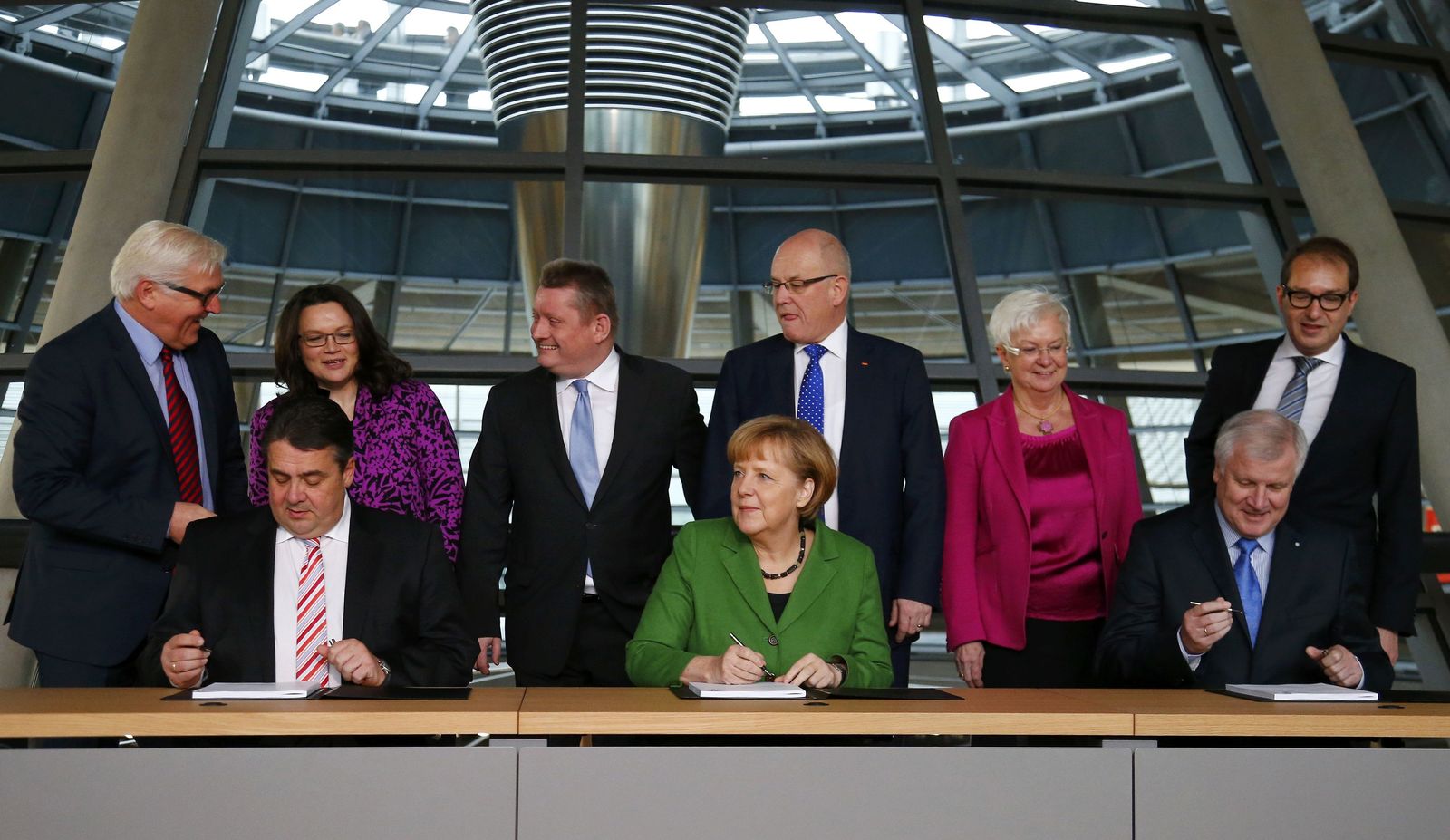 Almost a done deal: Chancellor Angela Merkel (center) is flanked by the heads of the two parties with whom she plans to govern.