As comebacks go, the one celebrated by Hesse Governor Roland Koch on Sunday night, after voters returned his party to power in state elections, was hardly convincing. One year after vote results showed a virtual dead heat between Koch's conservative Christian Democrats and the center-left Social Democrats, the CDU on Sunday came out well ahead of the SPD -- a result that paves the way for a continuation of Koch's decade-old stint as state leader and gives Chancellor Angela Merkel, who is leader of the CDU, a boost early in a year that will see her campaigning for re-election.

The CDU's victory, though, was not the strong start to a busy election year the party had been hoping for. The party emerged with 37.2 percent of the vote, just 0.4 percent better than in elections one year ago -- which was the worst the party had done in Hesse since 1966. 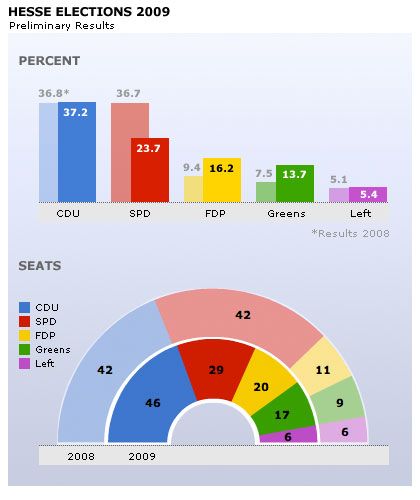 Indeed, the primary reason why the state of Hesse, home to Germany's financial center Frankfurt, is now set to emerge from a year of political chaos has little to do with the CDU. Rather, the change in political fortune comes due to the catastrophic results achieved by the SPD and the impressive 16.2 percent pulled in by the business-friendly Free Democrats, the CDU's preferred coalition partners.

The Green Party also managed to make substantial gains over its 7.5 percent result from a year ago, ending up with 13.7 percent. The far-left Left Party improved modestly to 5.4 percent.

Despite their unimpressive vote total, the relief was substantial in the Christian Democratic camp on Sunday night. The last 12 months had seen Koch leading a caretaker government with no party able to form a majority coalition. Koch on Sunday night told his followers "the nightmare has come to an end."

For the Social Democrats, on the other hand, the nightmare is just beginning. The party received just 23.7 percent of the vote, fully 13 percentage points lower than a year ago and the worst result the party has ever received in the state of Hesse. Andrea Ypsilanti, the SPD's celebrated top candidate a year ago, told her party that she took responsibility for the loss and that she was resigning as party head and floor leader in the state.

The party was punished for a year which saw Ypsilanti abandon campaign pledges to not work together with the Left Party, which is viewed with suspicion in Germany due to roots that lead back to the East German communist party. After the 2008 elections ended in a virtual dead heat between the CDU and SPD, Ypsilanti twice sought to create a minority governing coalition with the Greens that would be helped to power with votes from the Left Party. Her second attempt failed in November, whereupon new elections were called and Ypsilanti withdrew as her party's lead candidate in favor of back-bencher Thorsten Schäfer-Gümbel. Despite running a respectable campaign, Schäfer-Gümbel was unable to undo the political damage inflicted on the party by Ypsilanti.

"This election result is an admonition to the Hesse SPD," said Schäfer-Gümbel on Sunday evening after the first preliminary results had been announced. "One can't see it any other way."

The Hesse vote was the first in a year full of elections in Germany. In addition to Hesse, voters in four other states will be going to the polls this year. As well as those state elections, Chancellor Merkel is up for re-election in general elections scheduled for Sept. 27, Germany chooses a new president in May and European Parliament elections are set for June.

It is a year that may see a continuation of the trends seen in Hesse. Just as in 2008, five parties cleared the 5 percent hurdle necessary for parliamentary representation. Even more noteworthy, after a year of political bickering, all three smaller parties -- the Greens, the FDP and the Left Party -- made gains over their 2008 results. Particularly given the difficulties the SPD has run into, a further fragmentation on the left side of the political spectrum seems likely on both the state and national level.

Hesse, meanwhile, will end up with a governing coalition pairing the CDU with the FDP. It is a combination which has long played a significant role in German politics on both the state and national level -- and is one which now governs the five most populated German states.

Significantly, though, the pairing is only possible due to the FDP's surprising Sunday success. Should the party be able to use that result as a springboard to nation-wide success in September, Merkel may be able to avoid a repeat of her current governing coalition with the SPD.