Chancellor Angela Merkel's Christian Democrats suffered a defeat in Sunday's state election in Lower Saxony, depriving her of the boost she had been hoping for ahead of the September general election and indicating that she will have to fight harder for a third term than many had expected.

It was the 12th consecutive setback in a state vote for her party, and even though the election is still eight months away and Merkel remains highly popular, the opposition Social Democrats and Greens have smelt blood. They won a combined 46.3 percent against 45.9 percent for the center-right alliance of the CDU and the struggling pro-business Free Democratic Party. That will enable the center-left to govern with a majority of one seat in the Lower Saxony state parliament after the cliffhanger vote.

"I won't deny it, after such an emotional roller coaster such a defeat is all the more painful, so we are all sad today to some extent," Merkel told a news conference on Monday. But, matter of fact as ever, she shrugged off the implications for her re-election, saying: "We don't have a campaign for the general election, that will come later, we have a whole series of serious problems to solve, the economic situation is fragile , we want to ensure that the labor market situation remains as it is or can even improve a little, we have big tasks in Europe." 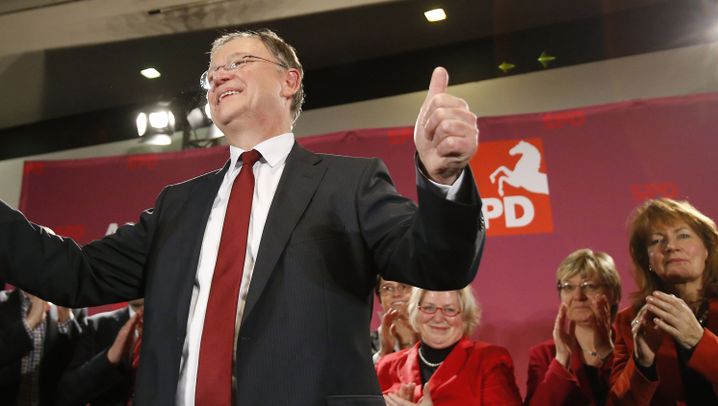 The result came despite damaging gaffes by the SPD's contender to oust Merkel, Peer Steinbrück, in recent months. Steinbrück, already under fire for earning over €1 million ($1.33 million) for lucrative speaking engagements in the last three years, said recently that German chancellors should be paid better -- a startling comment that suggested he was only in the race for the money.

Pollsters said Steinbrück's mistakes had hurt the SPD's campaign in Lower Saxony. But the damage was evidently limited. "If we get a result like this when we mess up, we can do anything," SPD national party leader Sigmar Gabriel told supporters on Sunday night with a smile.

Commentators said Sunday's vote made clear that the general election could be a very tight race indeed. Merkel had campaigned heavily in Lower Saxony, making a number of speeches there in recent weeks, but her presence didn't provide enough of a boost.

Lower Saxony is the latest in a long list of major defeats for the CDU in some of Germany's biggest regional states. It lost North Rhine-Westphalia, population 17 million, last year, and the conservative bastion of Baden-Württemberg, a wealthy industrial region, in 2011.

The loss of Lower Saxony, home to VW and Germany's fourth-largest state by population, is an additional blow because it means the center-left parties have an increased majority in the upper house of parliament, the Bundesrat. That will make it harder for Merkel to get legislation approved.

"It's a dampener for Merkel, but she still has a clear majority at the national level. I think she can still make it but this is a wake-up call for her," political scientist Gerd Langguth, who has written a biography of Merkel, told SPIEGEL ONLINE.

The chancellor's personal popularity ratings remain at record levels, partly because she has won kudos for limiting the fallout of the euro crisis for German taxpayers. She is also benefiting from the strength of Germany's economy which has managed to avoid the recession plaguing much of austerity-hit Europe thanks to the strength of its export sector.

Merkel is seen as a safe pair of hands and many analysts have said she looks almost unbeatable. She is a shrewd tactician with a knack for sidelining rivals, and she makes up for her lack of charisma and oratory skills with a low-key pragmatism that appeals to many voters.

But the weakness of the FDP is her Achilles Heel, and Sunday's election made that clear even though the ailing party appeared to come back from the dead, scoring an impressive and far higher-than-expected result of 9.9 percent. That gain was attributed to the popular CDU governor of the state, half-Scot David McAllister, who tacitly encouraged his supporters to split their ballot to make sure the FDP would clear the 5-percent hurdle needed to remain in parliament -- a precondition for him remaining in office.

That strategy appears to have worked a little too well, because it came at the cost of a steep drop in the CDU's own vote, by 6.5 points to 36.0 percent. Some 101,000 CDU voters opted to vote for the FDP this time, polling institute Infratest dimap estimated.

"The center-right camp can't really be pleased, the chancellor will have registered how dangerous a ballot-splitting campaign can be for her and the center-right," the chief political correspondent of the ARD public broadcasting network, Ulrich Deppendorf, said in a commentary. "The general election may be more exciting than expected."

SPD leader Sigmar Gabriel, put it a little more bluntly. "The FDP only really exists because it got a blood transfusion," he told party supporters.

"I am prepared to step aside if Rainer Brüderle wants to become party chairman," Rösler told the FDP's leadership on Monday. But a few hours later, the party announced that Rösler will remain FDP chairman and that the veteran liberal Brüderle, 67, would head the party's national election campaign.

At present, no one knows how strong the FDP really is when it doesn't get help from tactical voters. Its nationwide opinion poll rating slumped to a negligible 2 percent earlier this month, and it has been beset by infighting for years.

Both the Left Party and the Pirate Party failed to clear the 5-percent hurdle and didn't make it into parliament.

The Greens scored their best ever result in the state, jumping 5.7 points to 13.7 percent.

Greens parliamentary leader Jürgen Trittin drew parallels between Lower Saxony and the general election, pointing out that Sunday's vote had proven that the CDU could be beaten despite having a popular candidate. "Personal popularity can't make up for policies that are devoid of content and focused on serving one's clientele," he told a news conference. "Elections aren't a beauty competition or popularity contest."

Fellow Greens leader Katrin Göring-Eckhardt said the strong showing of her party was a sign that the SPD and Greens have a chance to win the next general election. "This evening has given us real tailwind for the general election. We can and we will manage to beat the center-right," she said.

However, the center-left still has a mountain to climb if it wants to topple Merkel. At the national level, her CDU is riding high at 43 percent, more than the SPD and Greens combined. The FDP is at four percent, below the five percent hurdle needed for parliamentary representation. Lower Saxony has shown that the party can spring surprises, though. Opinion polls in coming weeks will reveal whether Lower Saxony has given the SPD impetus.

Just a few weeks ago, opinion polls had indicated that SPD candidate Stephan Weil, with the help of the Greens, would easily defeat McAllister in Lower Saxony.

But McAllister, 42, the son of a Scottish soldier and a German teacher, fought a lively campaign, even resorting to bagpipe music to whip up sentiment, and managed to whittle down the center-left lead.

CDU leaders on Monday declared that the defeat and said it wasn't a bellwether for the general election. But they admitted governing would get harder in the coming months.

Volker Kauder, the parliamentary group chairman of the conservatives, said: "I expect that it will barely be possible to get projects through the Bundesrat (Germany's upper legislative chamber, which is dominated by SPD-led states) if the SPD doesn't want them. We'll see if that will be of any use to them."

Analysts said Merkel can't afford any policy slip-ups before the election. "It's decisive for her that her euro rescue policy remains promising over the summer and that taxpayers aren't plunged into any panic by horror scenarios or the prospect of an incalculable inflation threat," Richard Schütze, a communications consultant, wrote in a commentary.

"The implementation of her energy revolution must also gain pace significantly if the successful crisis manager wants to retain her popularity among voters." 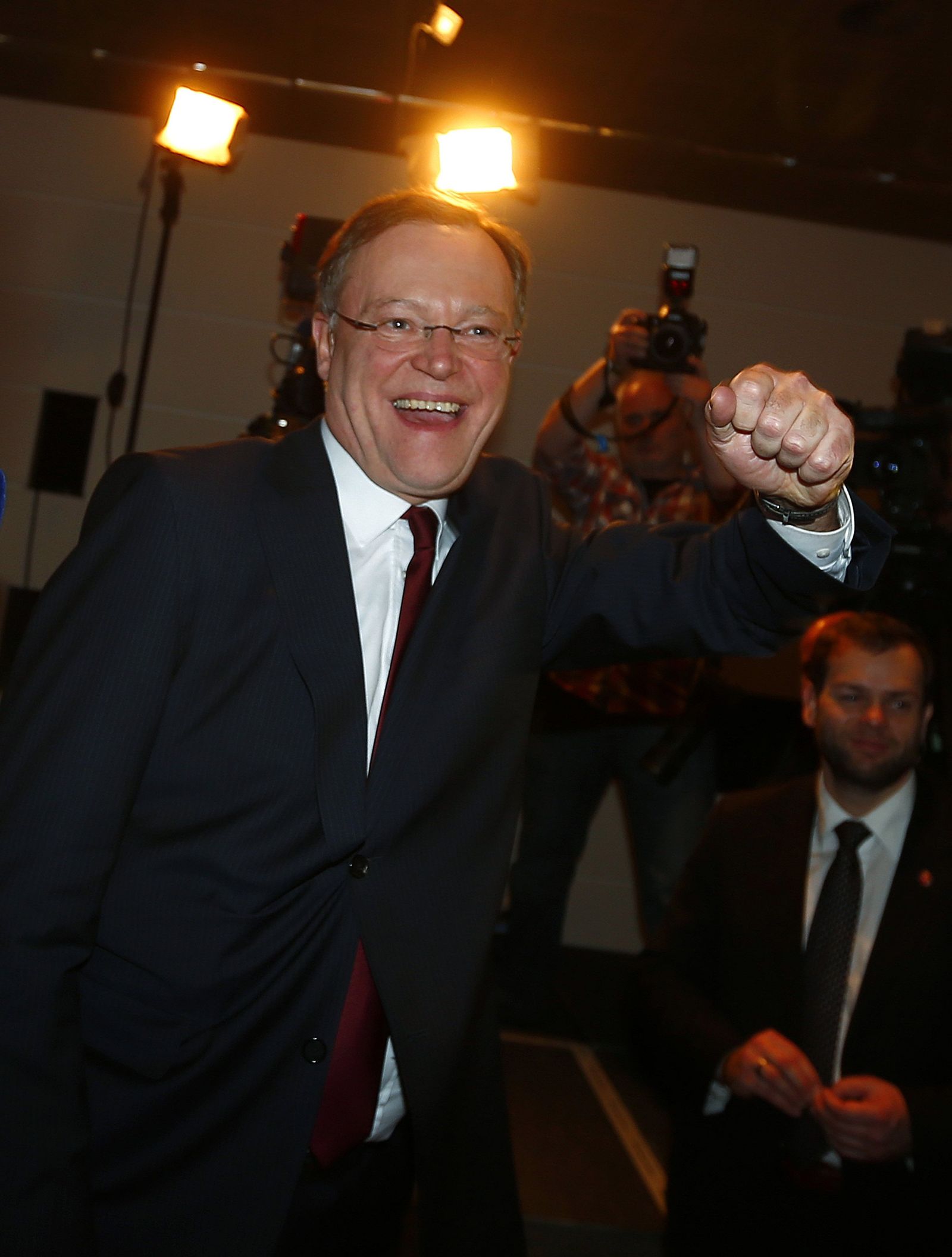