When it comes to global issues, German Chancellor Angela Merkel often strikes a high-minded tone. In a keynote speech she delivered at the 2011 Munich Security Conference, she spoke of the "obligation to pursue value-based foreign policy." She also frequently says that no compromises can be made on human rights. And, in her view, the greatest thing to come out of the NATO summit held in Chicago this May was that Germany successfully pushed through passages related to nuclear disarmament in Europe.

That's the official face of German foreign policy -- but it's not the only one. Despite what Merkel would have people believe, Berlin's attention was on more than just disarmament in Chicago.

Although it escaped public notice, the German government was also trying within NATO to compile a list of non-member states with whom arms deals should be allowed for strategic reasons. Having NATO's blessing would have made it possible for Berlin to justify even sensitive weapons-export deals to the domestic audience. But Germany's alliance partners blocked the effort.

Still, Merkel doesn't plan on giving up. Martin Erdmann, Germany's ambassador to NATO, will reportedly make a second go at things in Brussels. Weapons sales have become a key element in her foreign-policy strategy, which means that reducing any related political hurdles is important to Merkel.

Without accounting for it before a wider public, and with the support of Foreign Minister Guido Westerwelle, Merkel has altered the central premises of Germany's foreign and security policies. Her plans call for making arms exports to crisis regions -- which has long been a taboo in Germany -- a major pillar of the country's security policy. Since doing so could trigger a domestic political uproar, Merkel has been trying to justify her stance by taking circuitous routes like the one through NATO.

Merkel wants to bolster countries that -- at least from the German point of view -- can provide for stability in their regions. In doing so, she hopes to minimize the risks that the Bundeswehr, Germany's military, will have to participate in international missions to calm such crisis zones. The crux of the Merkel doctrine is essentially "tanks instead of soldiers."

The list of countries slotted to receive German arms is long. In June 2011, the Federal Security Council, a nine-member body made up of the chancellor and several ministers that meets behind closed doors, approved a preliminary application to sell more than 200 Leopard 2A7+ model tanks, Germany's most modern tank, to Saudi Arabia. In early July, Indonesia's government also expressed a desire to purchase 100 of these same tanks, and Qatar has likewise voiced its interest in the tanks. Merkel would also like a chance to sell Eurofighter fighter jets to India. And Angola reportedly wants to purchase "Made in Germany" patrol boats too.

The perpetually tense relationship between nuclear states India and Pakistan, and the fact that the Middle East numbers among the world's most explosive regions, do not run counter to Merkel's new strategy. On the contrary, according to her logic, weapons can also foster stability -- as long as they're in the right hands.

This strategy has a historical precedent. In 1969, then-President Richard Nixon announced a new US foreign-policy plan, the main maxim of which was that America would refrain from foreign interventions. However, it also called for America's allies to have their own militaries upgraded to be able to defend themselves.

The Nixon Doctrine was the president's response to lessons learned in the Vietnam War. Merkel's Vietnam is Afghanistan. When she takes stock of what the West has accomplished 11 years after launching its mission there, she sees a discouraging picture. She also views the West's UN-approved intervention in Libya as a failure because fighters and arms are now streaming from there into the Sahel region, where they are causing further destabilization.

These interventions have led Merkel to conclude that her government must avoid allowing Germany's military to participate in interventions at almost any price. Instead, it would like to assist select allies in either fighting terrorism or serving as a counterweight to problem countries.

Merkel's first public declaration of this new stance came last September, when she delivered a speech at a concert house in Berlin during an event honoring the 50th anniversary of the Bergedorf Round Table, a series of discussion sessions on international policy issues hosted by the Körber Foundation. She said that if the West doesn't have either the will or the ability to intervene militarily, "then it's generally not enough to send other countries and organizations words of encouragement. We must also provide the necessary means to those nations that are prepared to get involved. I'll say it clearly: This includes arms exports." Of course, she added, this would have to harmonize with a foreign policy "that is aligned with respect for human rights."

Merkel's model country is Indonesia, a Muslim country with an elected president who champions religious tolerance. But it would be a tall order for Germany to present all of the countries it would like to sell arms to as comrades in the battle for democracy, human rights and religious tolerance. This is precisely the challenge that Merkel's strategy will face.

Plans call for selling German tanks to Saudi Arabia so that it can be built up as a counterweight to Iran. The Sunni regime in Riyadh is supposed to prevent Shiite leaders in Iran from gaining any more influence or engaging in any military adventures abroad.

Human rights issues haven't played any role in these considerations. Indeed, the Saudi regime numbers among the most repressive in the world, and it even sent in troops and tanks to help Bahrain, its neighbor, suppress an internal pro-democracy uprising during the Arab Spring. What's more, it exports Wahhabism, an ultra-conservative branch of Islam, into the Arab world.

The next test case for Merkel's arms-export policy has already arrived. The sheiks in Qatar's government have announced their interest in purchasing up to 200 tanks in a deal that could be worth up to €2 billion ($2.5 billion). Weeks ago, a delegation from Krauss-Maffei Wegmann, the Munich-based manufacturer of the Leopard tanks, traveled to Qatar to discuss the possible deal.

Qatar's desire to purchase the tanks has yet to be discussed in the Federal Security Council. But there are indications that both the Chancellery and the Federal Ministry of Economics and Technology are inclined to give the deal their blessing.

In fact, Qatar perfectly fits the type of country targeted by the Merkel Doctrine. The peninsula-nation has become one of Germany's most important partners in the Gulf region. It took an active role in the fight against Libyan dictator Moammar Gadhafi, and it has been supplying the Syrian resistance with weapons. It aims to become a stabilizing power in the region and declares itself to be pro-Western. Taken together, these factors make it an ideal partner in Merkel's eyes. But it's still far from being a democracy.

Whether Merkel's strategy will bear fruit is an open question. "The idea of supporting partners in turbulent regions with weapons so that they can provide for stability is not implausible," says Markus Kaim, a security expert at the Berlin-based German Institute for International and Security Affairs (SWP). "However, a sensible strategy would have to be integrated into a European framework and incorporate all departments. One can't create stability with arms exports alone."

What's more, one can hardly predict how societies -- and particularly those in authoritarian states -- will develop. The rebellions in the Arab world, which have taken almost all experts by surprise, provide just one example of this. And what will happen when the arms fall into the wrong hands?

Indeed, there are plenty of historical examples of the risks of pursuing such a policy. In the 1980s, Islamic fundamentalists in Afghanistan were only able to resist Soviet invaders because the Americans had outfitted them with modern weapons. In doing so, however, America only strengthened what would become an enemy it later had to fight itself. Libya's Gadhafi also once enjoyed the favor of the West and was supplied with weapons that were eventually turned upon his own people.

Even selling weapons to countries that seem to be following a path toward democracy is not without its problems. For example, the Society for Threatened Peoples, an international NGO based in Germany, has accused Indonesia of human rights violations in West Papua. The situation is also sometimes difficult for Christians in the world's most populous Muslim-majority nation, which has prompted the Dutch parliament to reject a deal to supply Jakarta with tanks.

The fact that Merkel's arms policy is essentially hidden from public view because the Federal Security Council meets behind closed doors also makes it problematic. Ruprecht Polenz, the chair of the Committee on Foreign Affairs in the Bundestag, Germany's parliament, has called for parliament to assume a greater role in decisions related to arms exports. "We need more transparency on these issues," he says, but Merkel's government is not at all inclined to making such changes.

But it's interesting to make the historical observation that it wasn't long before the United States felt the stinging effects of the Nixon Doctrine. The Americans had lavishly supported Iran's Shah Mohammad Reza Pahlavi, including with weapons. His authoritarian regime was viewed as a pro-Western bulwark in the Middle East. But after the Islamic Revolution of 1979, these weapons were suddenly in the hands of one of America's bitterest rivals. 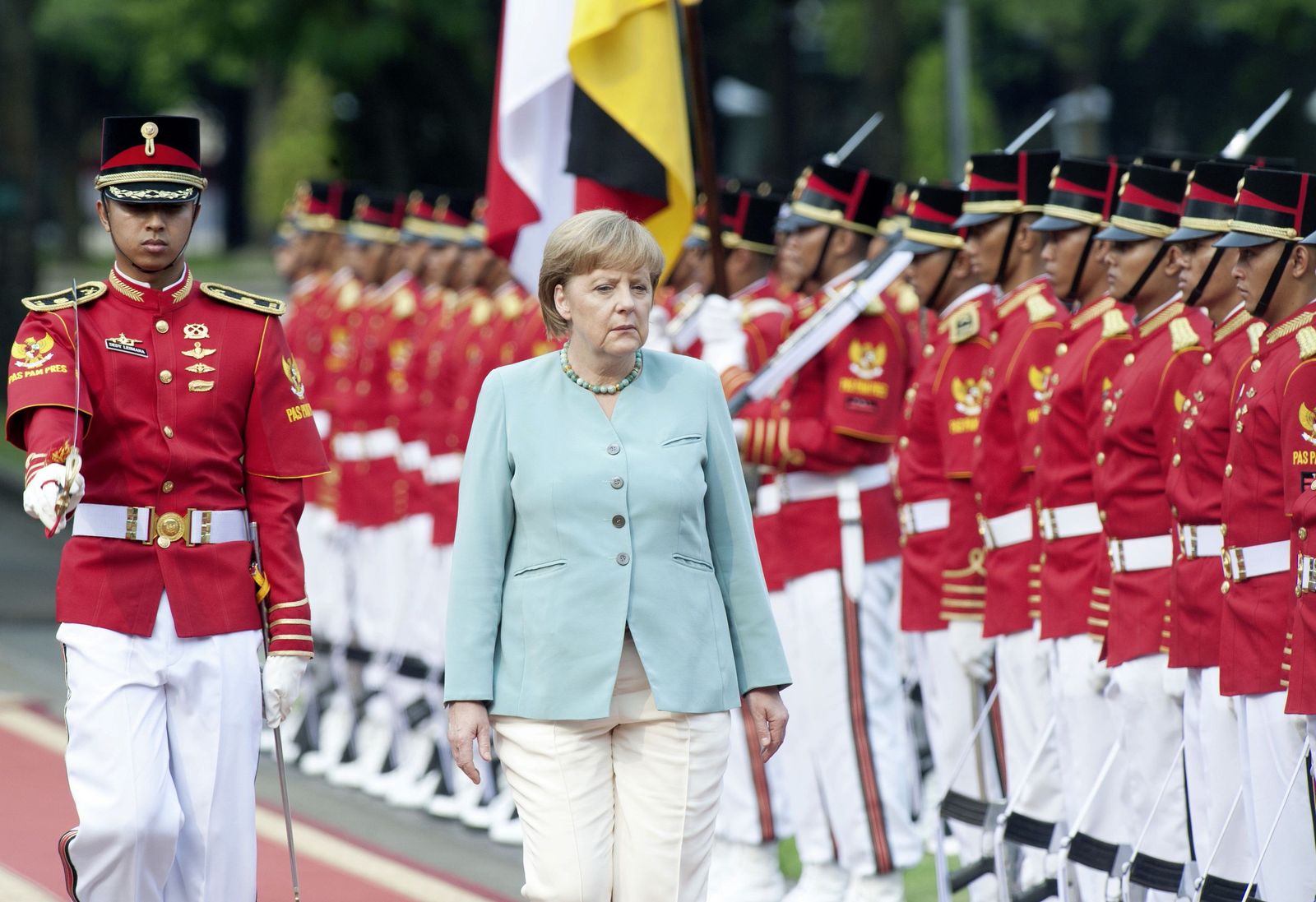 Merkel on a visit to Jakarta, Indonesia this July. The country wants German weapons.