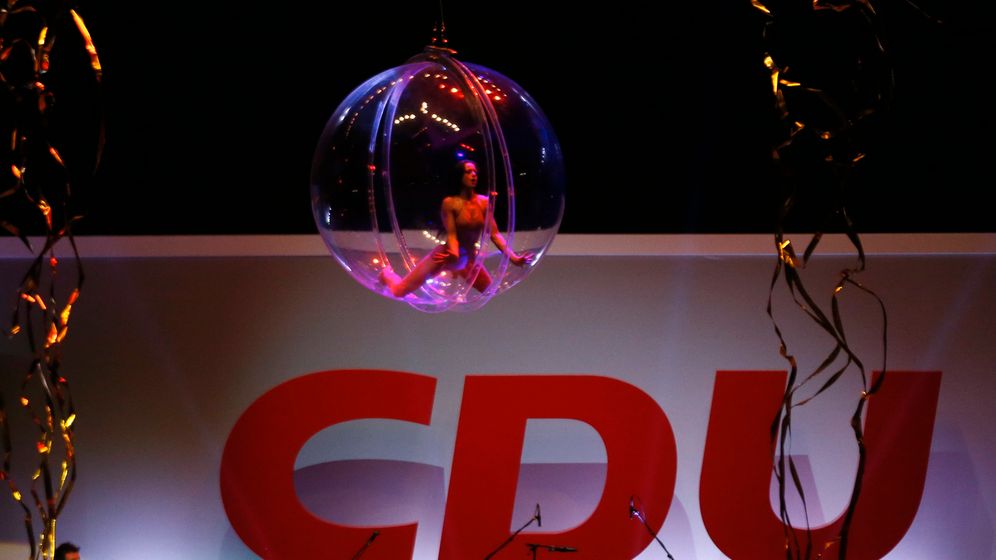 How do you energize your party's grassroots if you enjoy a massive lead in the public opinion polls? That's exactly the conundrum facing German Chancellor Angela Merkel's Christian Democrats with just two weeks to go before the election. But on Sunday, the party seemed to have found at least one potential solution: A variety show complete with scantily clad performers.

The idea, of course, was to invigorate the thousands of CDU supporters who decided to spend the last sunny Sunday of the summer inside the ISS Dome in Düsseldorf cheering on Merkel and other leading conservatives at a campaign rally. Attracting enough CDU enthusiasts had proved difficult enough. Although the arena can hold 13,400, Merkel and her party only managed to attract a mere 7,000 to Sunday's rally. With a poll on Sunday showing that the conservatives are ahead by 40 percent to 25 percent for the center-left Social Democrats, motivation is becoming a serious problem for the Merkel campaign.

A Mix of 'Mickey Mouse' and the Chippendales

But those who turned up on Sunday were certainly treated to a spectacle. The pre-Merkel warm-up show included, somewhat oddly, a rendition of The Beatles "Yesterday" to go with a kind of mini-variety show which appeared to be a mash-up of the "Mickey Mouse Club" and the Chippendales. And then there was the woman dressed in a skin-tight, skin-toned leotard who appeared to be doing unspeakable things with a clear plastic ball hanging from the ceiling.

Still, it was probably better than having a washed-up German actor speaking to an empty chair the way Clint Eastwood did at the Republican Convention in the United States.

Whether it will be enough to actually get German conservatives to vote remains to be seen. But Merkel herself was clearly mindful of the fact that her vast lead in the polls could become something of an Achilles heel on election day. "Many might think that the election has already been won. Many might think that I will somehow remain chancellor," Merkel said to the crowd. "But Monday morning (after the election) could be a rude awakening," she warned.

And she might be right. In both previous general elections, Merkel markedly underperformed the public opinion polls when it came to the actual ballot box. She has no desire for a repeat. "We truly must fight for every vote," she said on Sunday. And a bit of eye candy can't hurt either.