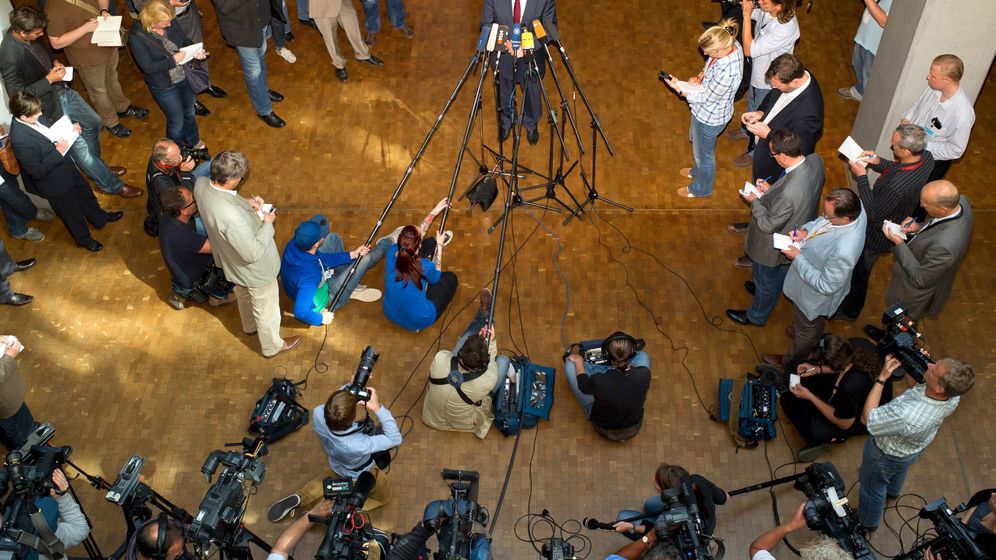 Photo Gallery: Who Knew What When?

There is a key term experienced crisis managers always return to in their narratives: controllability. It applies, for example, when a government is suddenly confronted with an unpleasant development and has to keep the process under control.

In this context, the government has an important advantage: It knows more than everyone else. It is completely familiar with events, and it can compare them with that which has already become public. It can assess the risk of how much more will be revealed and prevent further damage through the targeted release of information. With a little dexterity, it will ultimately manage to keep the truly important issues under wraps.

The NSA scandal doesn't fit into the pattern. Since the whistle-blowing American intelligence contractor Edward Snowden leaked the first details about Washington's unprecedented data mining activities to the public nine weeks ago, German Chancellor Angela Merkel's administration has lacked the most important tool in a crisis: controllability.

The Chancellery doesn't know what the Americans know. It doesn't know what Snowden knows, and it cannot assess what other information will still be leaked. It doesn't know exactly what its own people know and whether they know the same thing as the Americans. The difference between knowledge and ignorance has shifted dangerously for the government. What politician is going to commit himself publicly when he himself has so little understanding of the situation?

For seven weeks, Merkel and her advisors stumbled somewhat blindly through the NSA scandal, but on the Friday of the week before last, they created the impression that they had suddenly found a path in the fog. That was when the Bundesnachrichtendienst (BND), Germany's foreign intelligence agency, responded to questions from SPIEGEL and said that it could very well be behind the bulk of the NSA data coming from Germany. And most of that data came primarily from Afghanistan.

CDU on the Attack

The government went on the offensive a few weeks late. According to government spokesman Georg Streiter, it was former Chancellery head Frank-Walter Steinmeier, a member of the center-left Social Democratic Party (SPD), who provided the Americans with access to the German data in April 2002.

So is Steinmeier to blame? And is Merkel's SPD challenger in the September national election, Peer Steinbrück, a hypocrite for accusing the chancellor of violating her oath of office? Steinmeier countered by calling the government's attempt to evade responsibility "despicable." At the time, in the aftermath of the Sept. 11, 2001 terrorist attacks, surveillance was used to clear up "a horrific crime," but today its goal is the "complete and comprehensive surveillance of the data of our citizenry."

Still, Merkel's aides were pleased. Finally an attack. Steinmeier's behavior was "pure hypocrisy," thundered Hermann Gröhe, general secretary of Merkel's Christian Democrats. This Monday, current Chancellery Chief of Staff Ronald Pofalla will present the treaty of April 28, 2002, which serves as the basis for intelligence cooperation with the United States, to a parliamentary control committee verbatim.

The CDU is also thinking about expanding its attacks. Its goal is to unmask the SPD in its role as a clean prosecutor. The government of former Social Democratic Chancellor Gerhard Schröder offset its refusal to participate in the Iraq War with a high degree of compliance in cooperation with the intelligence agencies. "The pledge of unconditional solidarity could take on a whole new meaning," says CDU parliamentary floor leader Volker Kauder, referring to Schröder's pledge to Washington following the 9/11 attacks.

But the NSA scandal has shown that the fronts can shift at a dangerously fast pace. Ever since SPIEGEL reported last week that the massive transfer of metadata to the NSA likely passes through BND surveillance installations in the Bavarian town of Bad Aibling and a base in Afghanistan, the German government has felt safe. The official interpretation is that the BND itself is providing the data, German citizens are not affected and everything is in keeping with the law.

In fact, however, this new statement is also not without problems. A substantial portion of the vast amounts of metadata transferred to the NSA comes, according to information obtained by SPIEGEL, from the analysis of mobile phone transmissions. The signals are generated continuously whenever a phone logs into a cell site through a mast.

The blind transmission of this cell data to American Taliban hunters is likely to aggravate the political dispute even further. The transmission is blind because the BND doesn't even check which specific signals it is providing to the Americans. But the BND considers the massive amount of data -- a document from the Snowden archive which SPIEGEL reported on in July, called "Germany - Last 30 Days", notes that it was 500 million connections in December of 2012 alone -- to be "plausible."

What is clear is that XKeyscore, the surveillance program that both the BND and the NSA use, offers extensive possibilities. It is likely one of the biggest treasures in the arsenal of US surveillance experts.

On the first of August, BND President Gerhard Schindler told the Parliamentary Control Panel, the body in German parliament charged with keeping tabs on German intelligence agencies, that in 2012 his agency obtained an average of 3.2 million pieces of content data per month from satellite surveillance. As such, US intelligence agents learned the content of phone calls, emails and text messages. But this only explains a small part of the flow of data the NSA captures. NSA documents speak of 182 million datasets being captured by XKeyscore in Germany last December, a far cry from the 500 million total mentioned elsewhere in the documents from the Snowden archive that SPIEGEL has been able to see.

The BND assumes that the difference could consist of the connection data that is forwarded directly to the Americans in Bad Aibling, as well as data from radio cell analysis. This information provides the Western coalition with valuable information for the war in Afghanistan. Spy programs like XKeyscore use the information to create movement profiles that show, with only a few minutes' delay, where a mobile phone user is located at a given moment, be it a Taliban fighter, an Al-Qaida militant or a German Islamist. But the information also improves security for soldiers.

The BND itself states that it has provided "substantial assistance" since January 2011, and that this prevented four attacks on German soldiers in Afghanistan. In the case of 15 other foiled attacks, the agency's data surveillance "contributed to these successes."

According to the BND, it "intercepted 67 warnings pointing to upcoming attacks or an exacerbation of the threat situation in Afghanistan" in the same period. The Americans also highly value the work Germany's foreign intelligence agency is doing in Afghanistan. In secret documents, the NSA repeatedly expressed its praise for the greater "risk" the Germans -- previously derided as being too cautious -- had been taking for some time.

But this openness to risk could also have unpleasant consequences for the government. The awkward question that now arises relates to the legitimization of this close cooperation through data transfer. Is the BND allowed to transfer radio cell data to the NSA if the information could play a role in deadly operations by the US military, such as the targeted killing of al-Qaida combatants by American drones? According to a report in the Süddeutsche Zeitung, the agency, at the express request of BND head Schindler, also passes on mobile phone numbers to partner agencies. In doing so, is it providing the information they need while analyzing radio cell data?

The BND downplays the issue, saying the data supplied to the Americans is "too imprecise for concrete targeting by drones." But when asked, it also concedes: "It cannot be ruled out that there is assistance in orientation for military operations."

Targeted killings with unmanned aircraft have been criticized worldwide and are legally highly controversial. Two Germans were killed in such attacks in recent years. Bünjamin E., born in Wuppertal, died in Mir Ali on Oct. 4, 2010. In the spring of 2012, a drone struck a pickup in which Samir H., an Islamist from Aachen, was sitting. Experts assume that radio cell data could indeed provide valuable information for such attacks.

It is also questionable whether the massive data mining and transmission to a foreign intelligence agency is compatible with German law. "Although the law permits the BND to monitor international email and telephone communications from Germany," says lawyer Niko Härting, who teaches at the Berlin School of Economics and Law, "it does not provide for the mining of connection data by the millions."

Legal expert and civil rights activist Burkhard Hirsch considers it highly problematic that the systemic cooperation between German and American intelligence agencies apparently takes place beyond all parliamentary control. "If the BND is working for another intelligence service to such an extent, it's a political process, which absolutely should have been handled in the relevant Bundestag committee." However, there have been several special sessions of the Parliamentary Control Panel since the beginning of the NSA scandal, and the BND has yet to inform the committee on the extent of the data being passed on.

On Monday, the Control Panel will have its next opportunity to shed light on the open questions. For the last two months, the most important question has been what exactly the activity of friendly foreign agencies in Germany looks like.

Even if the statements made by the BND and the German government within the last week are true, Snowden's main accusation still hasn't been disproven: that American and British intelligence agencies are independently and systematically fishing millions of pieces of communication data worldwide.

A statement made by the German government in 2011 provides another clue to support Snowden's account. According to the statement, the German government granted exactly 207 foreign companies special rights for "analytical services" on German soil from January 2005 to February 2011. Their activities included "signals intelligence," "human intelligence" and "military intelligence" -- in other words, human and technical espionage.

It is unclear whether the work of these companies undermines the civil rights of German citizens, and what exactly the German government knows about it. In addition, new documents that SPIEGEL was able to view show that US intelligence agencies are explicitly familiar with several espionage operations in Germany.

German-American cooperation is still very important today, says Hirsch. "But it isn't acceptable that the Americans, as the hegemon of our community of values, are stomping on the basic values of our constitution like an occupying power."

4 Bilder Photo Gallery: Who Knew What When? 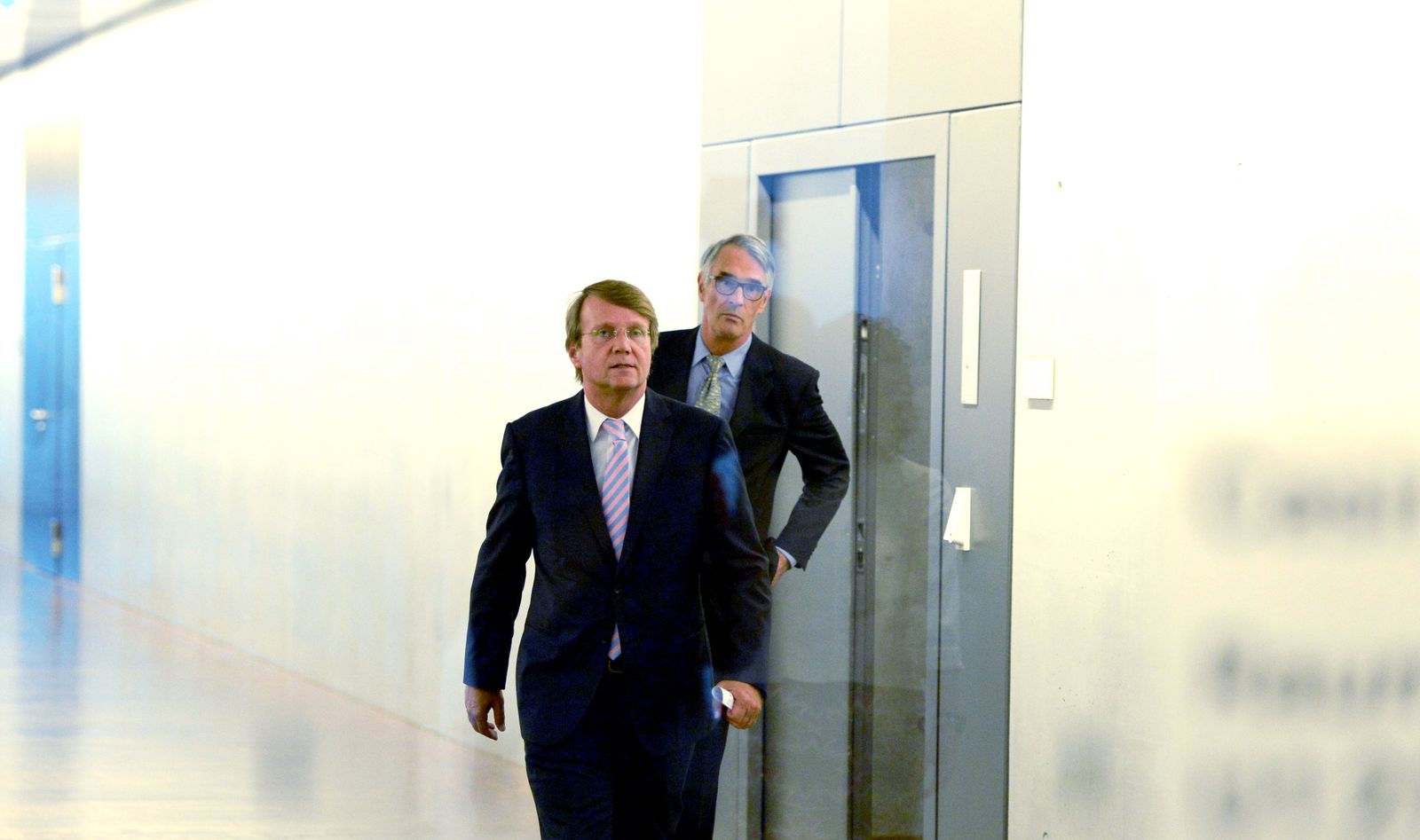 Current Chancellery Chief of Staff Ronald Pofalla has been under intense pressure to open up about the true extent to which German intelligence agencies cooperate with their American counterparts.