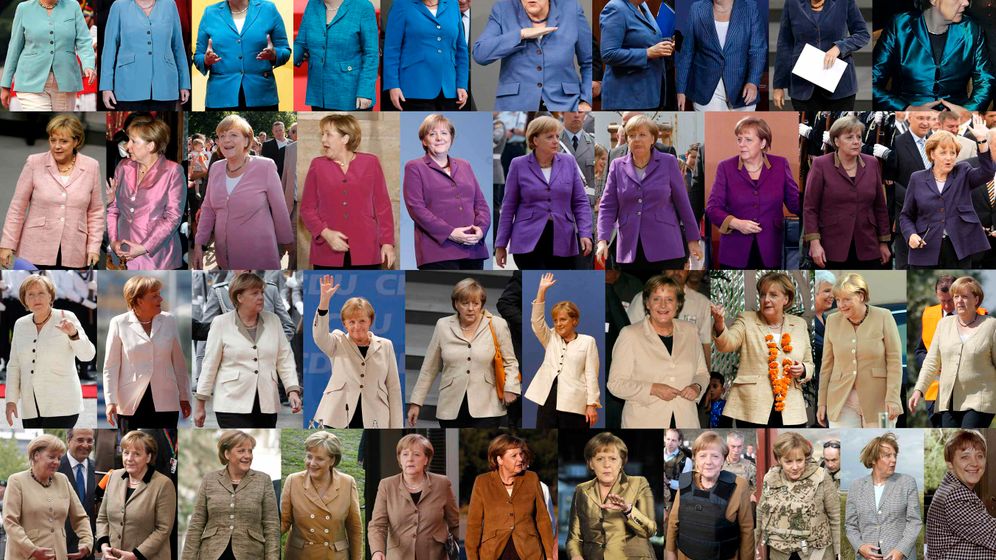 Germans like their quiet. Should a couple raise their voices such that they can be heard in the courtyard of a city apartment building, it is a sure bet that before long, the phrase "Ruhe da!" ("Quiet!") will come ringing out of an open window. Even in big metropolises like Berlin, most flat seekers yearn for silence and tranquillity, far removed from the chaotic noise emanating from the busy streets.

Angela Merkel, more than any other politician on the campaign trail this year, has understood her flock's desire for calm. Even during the one televised debate on Sept. 1, the only time the chancellor became animated was to fend off the sometimes pointed thrusts delivered by her primary challenger, the Social Democrat Peer Steinbrück. She had to defend her policies after all -- policies aimed primarily at keeping the peace.

That, more than anything, explains why she is now perfectly positioned to win a third term in the Chancellery in Sunday's general election.

The chancellor has even gone so far as to directly appeal to the electorate's longing for quiet. As Reuters correspondent Alexandra Hudson noted in a recent article, the election manifesto for Merkel's party includes the assertion: "One in two Germans feels troubled by noise" and suggests that her party would seek to improve the situation.

Merkel's campaign, in short, has been masterful, custom designed to appeal to as many German voters as possible. Whereas Steinbrück, no slouch when it comes to understanding and explaining complex issues, has often resorted to brash humor in an attempt to win over his fellow citizens, Merkel has successfully managed to remain above the fray with her promise of continuity and a steady hand.

Indeed, she hardly ever mentions Steinbrück's name on the campaign trail and one would be hard pressed to find a recent political race anywhere that has been as devoid of personal attacks and mudslinging as this one. Her posters proclaim simply "Merkel: Chancellor for Germany" or "Successful Together." And in recent weeks, she has even taken to using a slogan once pioneered by Germany's first postwar chancellor, Konrad Adenauer: "No experiments."

It is tempting to ascribe some of Merkel's political personality and low-key campaigning style to two aspects of her persona that are unprecedented for a German chancellor: that she is a woman and that she grew up in former East Germany. Doing so, however, runs the risk of underselling her prodigious political acumen.

One must only look at her ascent to the pinnacle of the center-rightChristian Democratic Union (CDU). In December 1999, with then-Chancellor Helmut Kohl embroiled in a campaign finance scandal, Merkel publicly broke with him in an open letter published in the respected Frankfurter Allgemeine Zeitung. It was a move that sealed the end of Kohl, her political mentor, and allowed her to quickly rise above all of Kohl's loyal followers in the CDU pecking order. She was made party chair just two months later.

The 2005 campaign provided her with another important lesson. Even as Chancellor Gerhard Schröder of the center-left Social Democratic Party (SPD) was struggling in the polls, Merkel came within a whisker of losing that year by running on a campaign of "honesty" -- including a pledge to raise the sales tax by two percentage points and promises of reform.

She gave voice to the lessons she learned during a 2007 speech delivered on the occasion of long-time German Foreign Minister Hans-Dietrich Genscher's 80th birthday party. "From my perspective," she said, "the indeterminacy in his comments on the issues he addressed and the concurrent satisfaction with which journalists received those comments left behind, to be honest, a lasting effect on my political education."

The result has been a chancellor who prefers to wait before making decisions and a leader who is sometimes difficult to pin down. It has also helped propel her popularity to dizzying heights. Her followers have taken to affectionately calling her "Angie." The German press has dubbed her "Mutti," the word children in Germany use to address their mothers.

Merkel's understanding of her voters' need for quiet has informed her policies as well. During her stint as party chair, the CDU has moved significantly to the left -- to the point that calling her party conservative is something of a misnomer. Following the tsunami and subsequent meltdowns in Fukushima, Japan in March of 2011, Merkel quickly abandoned nuclear power and embraced alternative energies. It was a move that ended the country's decades-long acrimonious debate over atomic energy and allowed her to appropriate one of the central platforms of the Green Party.

She has done the same to the Social Democrats by significantly increasing social benefits to German families, pursuing minimum wage deals (albeit on a sector-by-sector basis), saying that she wants to control rapidly rising rents and, though tepidly, encouraging voluntary measures to improve gender equality.

Difficult for Her Challengers

Finally, the chancellor has proven adept at keeping the euro crisis at bay. Germans are eternally grateful that, even as Merkel has made life painful for many in crisis-stricken countries in southern Europe, the economy at home has remained strong. Hardly surprising, then, that her party -- together with its Bavarian sister party, the Christian Social Union (CSU) -- is likely to rake in 40 percent of the votes on Sunday.

Merkel's cautious, consensus-based centrism has made it extraordinarily difficult on her political opponents. One of the primary messages Steinbrück has sought to deliver in his campaign is a warning that the chancellor is attempting to lull Germany to sleep. He would seem not to have recognized that German voters like nothing better than a good lullaby.

Instead, with Merkel solidly occupying the center of Germany's political spectrum, the best Steinbrück's party can hope for on Sunday is to be able to put an end to the chancellor's current center-right coalition.

With the tendency for German voters to lean left -- and their apparent need this election season to avoid surprises -- it looks as though the SPD might achieve that modest goal. Though Steinbrück himself has said he would not take part in a so-called "grand coalition" pairing the SPD with the conservatives, the electorate would seem to want just that.

The End of Her Current Coalition?

Merkel's current coalition partner, the Free Democratic Party (FDP), is partially to blame. Following its record 14.6 percent showing in the 2009 general election, then FDP leader Guido Westerwelle -- Germany's current foreign minister -- boisterously sought to take advantage of his party's popularity by forcing Merkel to adopt some of the FDP's pet positions. It didn't work; the chancellor was not to be moved. On the contrary, her junior partner's chest pounding poisoned the atmosphere for the first two years of her second term and led to Westerwelle being toppled by fellow party member Philipp Rösler as leader of the party.

That is a significant reason why the FDP is in danger on Sunday of not crossing the five percent threshold for representation in German parliament. And even if it does, it may not be enough to grant the center-right coalition more seats in parliament than the opposition. It is as if the German electorate shouted in unison: "Ruhe da!"

The irony of Sunday's election is that Merkel won't be able to guarantee quiet for long. There are a number of issues begging for attention, with the euro crisis first among them. From the EU banking union to a new aid package for Greece, Merkel's repeated intimations that the crisis is largely under control will likely soon be exposed. At home, energy costs are spiralling, expenditures on infrastructure are lagging and the business community is demanding action on a host of issues.

Germans, though, remain certain that Mutti will take care of it, no matter who her coalition partner ends up being. Her leitmotiv, after all, is one that fits her country like a glove. "Everyone has their own way of making their point," she said in March 2009 on a television talk show. "Silence can work too." 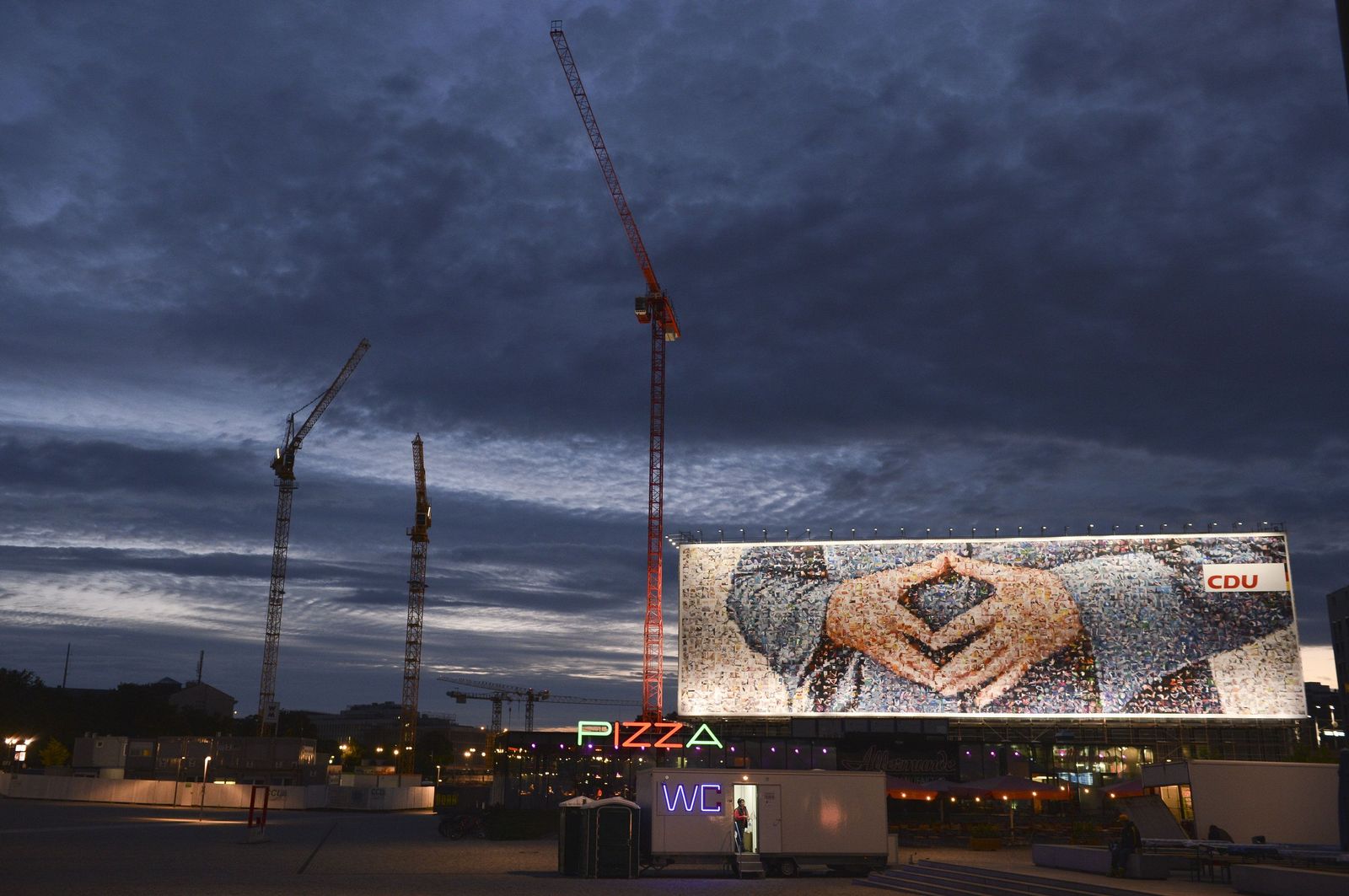 The chancellor's famous hand gesture became something of a meme in the campaign. Here, it is shown on a massive poster near the main train station in Berlin. Gregor Gysi is a lead candidate for the far-left Left Party. Steinbrück could give Merkel a run for her money if he agreed to form a coalition with the Left Party. But the party was formed from the remnants of the East German Communists and widely shunned as a result. Still, it will likely win close to 10 percent of the vote on Sunday and could be the country's third strongest party.