German Chancellor Angela Merkel, in a hurry to form a new government after her election victory on Sept. 22, has set herself a two-week deadline for finding a coalition partner.

She told members of her conservative parliamentary group at a meeting on Tuesday that she wants to know which party will be entering formal coalition talks by Oct. 22, when the newly-elected Bundestag lower house of parliament will assemble for its first session.

That doesn't mean a new government will be in place by that date, though. It means she wants to be sure who her likely coalition partner is going to be -- either the center-left Social Democrats (SPD) or the environmentalist Greens. Currently, she is holding exploratory "sounding-out" talks with both parties.

A so-called grand coalition with the SPD is still seen as the most likely option because the two parties are closer in policy terms than the conservatives are with the Greens.

A conservative-SPD alliance would have the added major advantage of dominating not just the Bundestag but the Bundesrat upper house of parliament as well, making it much easier to pass legislation.

The Greens, meanwhile, have embarked on a strategic rethink after they scored just 8.4 percent in the election, a disappointing result that triggered the resignation of the party's entire leadership.

Those talks start on Thursday, six days after the first round of talks with the SPD. Merkel, keen to have the option of a deal with the Greens to maximize leverage in negotiations with the SPD, said on Tuesday that the outcome of talks with both parties is open.

But Hofreiter poured cold water on prospects for a conservative-Green government, saying: "We got a very nice invitation from the CDU/CSU to meet for preliminary talks. But when I hear some of the comments from the CSU, I've got my doubts whether such a coalition could last for four full years and not just 100 days."

The Greens and the arch-conservative CSU wouldn't be a marriage made in heaven. CSU leader Horst Seehofer all but ruled out such a coalition shortly after the election. And CSU general secretary Alexander Dobrindt, never one to mince words, made clear this week the CSU would favor the SPD as partner.

Scoffing at the Greens' campaign suggestion that public canteens should introduce a meat-free day, Dobrindt said: "We'd rather talk with the SPD because we don't want to have to listen to the Greens prattling on about 'Veggie Days' and their ideas on telling people how to lead their lives."

Merkel, who led her conservatives to their best general election result since the heady days of reunification in 1990, is just five seats short of an absolute majority. But she's likely to pay a high price for this.

The SPD has said it wants six cabinet posts and may demand the important position of finance minister, currently occupied by CDU heavyweight Wolfgang Schäuble. It may also force concessions on Merkel's European policy by demanding a softer stance on austerity.

But Merkel stressed on Tuesday that the election result didn't amount to a mandate for a change in government policy, only for "certain modifications," members at the parliamentary group meeting reported.

Observers say the coalition talks, once they begin in earnest, could drag on to the end of the year or even into January. If they fail, Germany would have to hold a new election. In that case, her conservatives would likely emerge even stronger, an opinion poll released on Wednesday showed.

The Forsa poll showed them at 45 percent, well above their 41.5 percent election result, with the SPD at 24 percent, down 1.7 points from the election.

The pro-business Free Democrats, Merkel's junior coalition partner for the last four years, which failed to gain enough support to remain in parliament for the first time in post-war history, scored just three percent in the Forsa poll, down from 4.8 percent.

And the anti-euro Alternative for Germany, which critics say has xenophobic traits, was up 1.3 points at six percent, according to Forsa -- above the five-percent level needed for parliamentary representation. 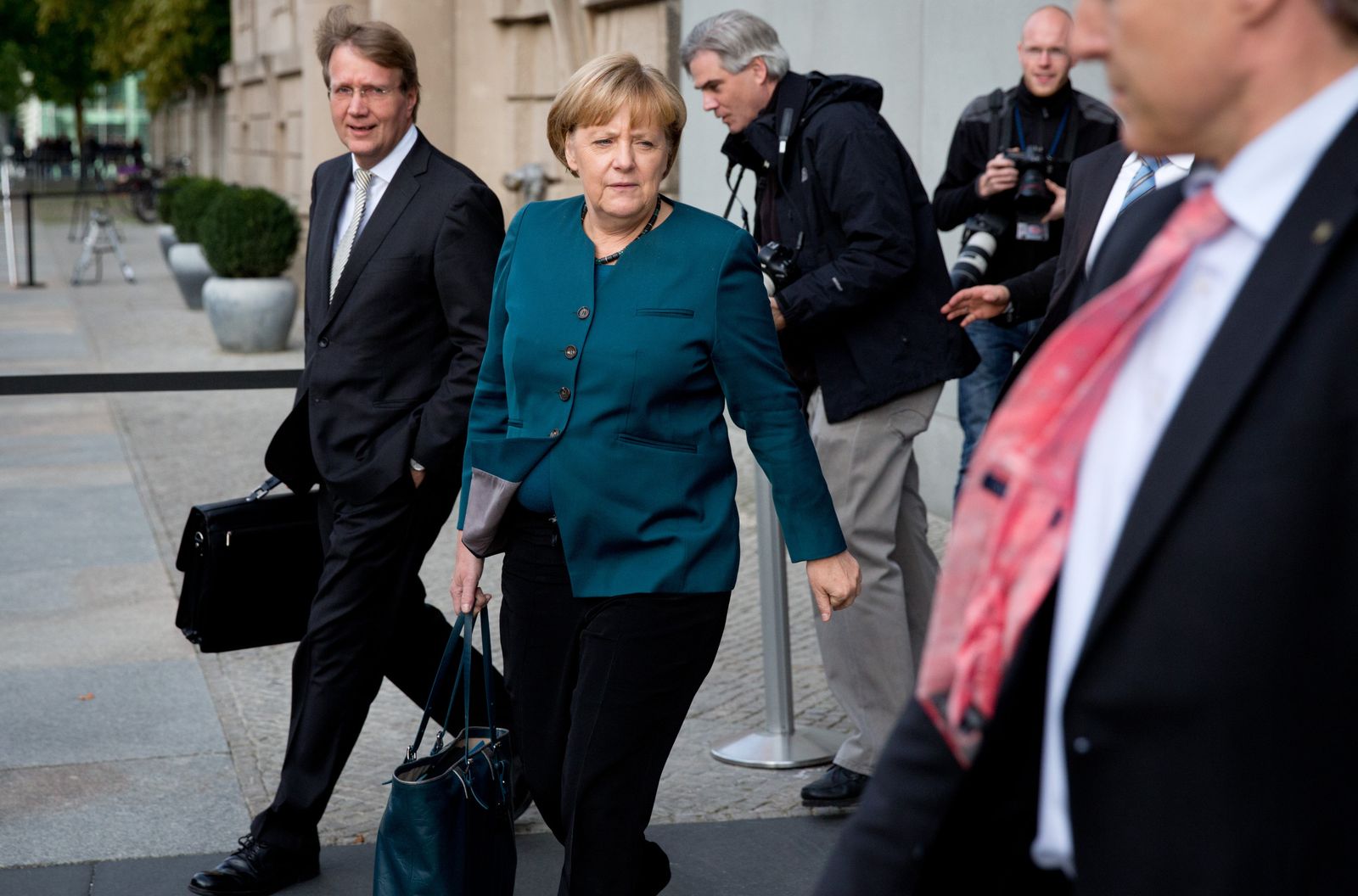 Merkel last Friday after a first round of preliminary coalition talks with the SPD.