Angela Merkel's conservatives won a stunning victory in Sunday's general election, sharply increasing their share of the vote by 7.7 points to 41.5 percent and putting her on track for a third term.

It's the best result for the conservatives since the heady days of 1990, when Germans handed then-Chancellor Helmut Kohl, Merkel's former mentor, his third term in a wave of gratitude for his role in reunifying the nation.

Germans are similarly grateful to Angela Merkel, it seems, for steering them through the euro crisis.

Merkel's junior coalition partners, the pro-business Free Democratic Party (FDP), crashed out of parliament. Their share of the vote collapsed to 4.8 percent, according to preliminary final results released by the Federal Returning Officer early on Monday morning. That was below the five percent level needed for parliamentary representation. In the last election in 2009, the FDP had scored its best ever result of 14.6 percent.

"We can already celebrate today because we did great," a beaming Merkel, 59, told ecstatic supporters at the CDU's headquarters in Berlin.

Bild, Germany's best-selling daily, ran the banner headline "Merkel's Greatest Triumph" on Monday morning and commented: "It's a phenomenal victory for the woman whom the majority of Germans trust -- and only that seems to have counted at the ballot box. Taxes, justice and the euro weren't the decisive factors. This question was: Who do people trust to rule calmly, sensibly and with strong nerves?"

It was her personal victory. Her party, the Christian Democratic Union, focused ts campaign squarely on her, with election posters showing her with her trademark enigmatic style and bland slogans like "Successful Together" and "Chancellor for Germany."

"Merkel has represented Germany at a difficult time and on all the red carpets and in her whole demeanour, she has given Germans the feeling that she's stood up for their interests in difficult times. It's the Mutti factor," Heinrich Oberreuter, a political scientist at the Bavarian University of Passau, told SPIEGEL ONLINE.

But while her position as queen of Germany and of Europe has been reinforced by her success, Merkel faces difficult days of horsetrading to form a stable coalition. 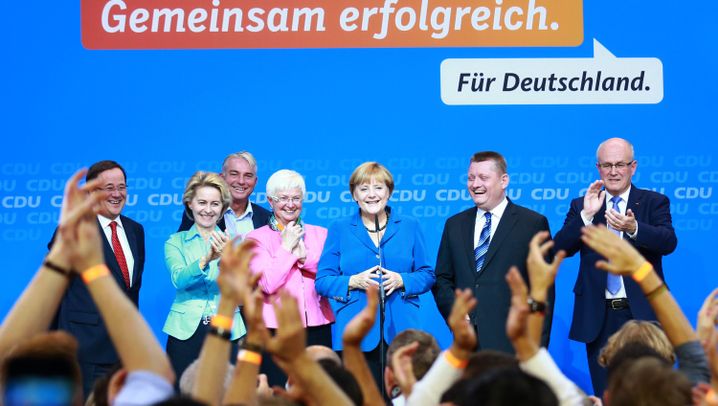 Photo Gallery: The Highs and Lows of Germany's 2013 Election

Her conservatives fell only five seats short of an absolute majority. For a number of tense hours on Sunday night as the votes were being counted, it looked as if she might be able to govern without a coalition partner. The last time a conservative government had an absolute majority was in 1957, under Konrad Adenauer, West Germany's first post-war chancellor.

She may well have been relieved when results finally confirmed that Germans had spared her an absolute majority. Such a triumph could have been a poisoned chalice. She would have faced the uncomfortable prospect of governing with a wafer-thin majority of seats and a hostile, opposition-dominated upper house of parliament with the power to block her policies.

She now needs to find a coalition partner, the most likely candidate being the center-left Social Democratic Party (SPD), which will want to extract the highest possible price for its cooperation in a so-called grand coalition, both in terms of cabinet posts and policy concessions.

The prize, however, would be a left-right government with an overwhelming majority in both houses of parliament. She wouldn't have to worry about backbench rebellions against upcoming euro bailouts or domestic reforms, which she will finally have to address after years of postponement.

A grand coalition suits Merkel's political style. She has always been a more skillful mediator than she is a leader, and she governed successfully with the SPD in her first term between 2005 and 2009. Her center-right coalition with the FDP was marked by in-fighting and political stalemate over the last four years.

Merkel, asked on Sunday night if she could imagine governing even if she had an absolute majority of just one seat, was typically evasive. "I don't want to respond to all this speculation, " she said. "Let's wait for the final result to come in."

Her current partner, the FDP, was left reeling from its disastrous result. The party, a traditional kingmaker in German politics, has been in parliament continually since the Federal Republc was founded in 1949. "This is bitter for me. This was my passion," a distraught looking FDP leader and Economics Minister Philipp Rösler told supporters.

The SPD reached 25.7 percent, up from 23.0 percent in 2009. The Greens fell to 8.4 percent, down from 10.7 percent in 2009 after a tepid campaign beset by controversy over its unpopular call for a meat-free day in public canteens and, in recent weeks, revelations about its support for legalizing sex with minors in its early days in the 1980s.

In a significant development, the anti-euro Alternative for Germany (AfD) party, which was formed in February and calls for an "orderly dismantling of the euro zone," came close to the five percent threshold, scoring 4.7 percent. Its platform included calls for curbs on immigration and rival parties accused it of right-wing populism. The Left Party fell to 8.6 percent from 11.9 percent, making it the third biggest party.

'The Ball is in Frau Merkel's Court'

Merkel's SPD rival, Peer Steinbrück, told supporters: "The ball is in Frau Merkel's court, she has to find herself a majority." SPD leaders are understandably reluctant to form a coalition with Merkel. They would be the weaker partner by far in a power-sharing government -- the conservatives got almost 16 percentage points more than the SPD. Durng the last coalition between 2005 and 2009, the two political camps were almost equal in parliamentary seats-- and even then, the SPD lost big in the 2009 election because Merkel got all the credit for that government's success in handling the financial crisis.

"I can't imagine that central projects of ours (...) could be implemented in a grand coalition," said Sascha Vogt, the head of the SPD's youth organization. But the SPD may have to bite the bullet. It has ruled out forming a coalition with the Left Party, which there won't be a three-way alliance of SPD, Greens and Left Party, even though it would have enough seats to govern.

A coalition between the conservatives and Greens is equally unlikely given that most Greens don't want it and they've got other problems to tackle after their poor result on Sunday.

And the only other option -- a new election if no coalition can be found to elect a chancellor in parliament -- would probably only result in an even stronger result for Merkel.

So Germany faces tense days and weeks of coalition talks with the most likely outcome being a grand coalition. It's a constellation most of Germany's European partners would prefer.

Many of Germany's European partners regard a grand coalition between the conservatives and the SPD as the best possible outcome. It ensures continuity at the helm of Europe's most powerful economy and it will likely force Merkel to put a bigger focus on stimulating economic growth and curbing unemployment in the euro zone.

A grand coalition would also, thanks to its huge majority in parliament, strengthen Merkel's hand in managing the euro crisis.

With the SPD in her coalition, she may even be able to muster two-thirds majorities needed to change the German constitution if future changes to Europe's institutions should warrant that.

Her hands will, however, remain tied by rulings of the Federal Constitutional Court, which will rule next month on the European Central Bank's bond-buying policy, which put a lid on the crisis when it was announced last year.

Germany is an island of prosperity in a crisis-ravaged Europe, with unemployment of 6.8 percent compared with 12.1 percent in the 17-nation euro zone.

Merkel offered her own explanation for the election outcome on Sunday night: "There are many, many people who find that in view of the difficulties all around us, we're living in a pretty good country, perhaps we should dare to say that."