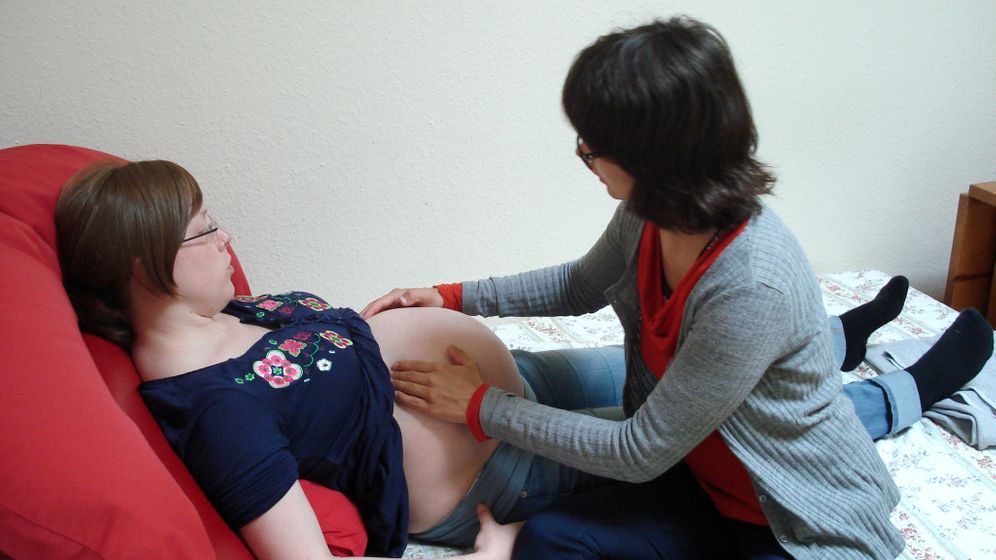 Isabel Grafe presses softly on the belly of Christine, an expectant mother who is laying comfortably on a bed. "Feel there, this small part is the knee, but I am actually looking for the buttocks," Grafe says. Christine's due date is on Sunday and midwife Grafe is giving her a few last tips.

Grafe, 29, works in the Hamburg Birthing Center in the northern German port city. Ten self-employed nurse midwives are based here, with most working fulltime and as much as 60 hours per week. Birthing center manager Britta Höpermann says that a net average wage of €8 to €9 ($11.50-$13) per hour is normal for workers here, but that is barely enough to pay the rent in an expensive city like Hamburg.

Christine, from Henstedt-Ulzberg, a small town north of Hamburg, is determined to deliver her baby with a midwife by her side. "I associate hospitals with illness. And I'm not ill," she says. For each of her prenatal appointments, Christine has traveled from Henstedt-Ulzberg to Hamburg -- a distance of about 20 kilometers (12 miles) each way -- to see Grafe.

A birth is an emotional experience, one accompanied by immense joy and fear. Pain is a given, and support services for the woman giving birth are a must. In Germany, nurse midwives are a common part of the experience in the maternity wards at local hospitals. According to the latest available figures from the German Federal Statistical Office, close to 10,000 midwives aid in the births of 644,274 babies at hospitals each year.

In the future, however, German parents hoping to use the services of a midwife will be burdened by additional bureaucracy and planning when it comes to the birth of their child. Even today, it isn't uncommon for a person to be turned away when trying to secure a midwife in May for a December birth. It's likely to become even more difficult -- at least for women who hope to choose their own midwife. The number of self-employed midwives, who attend births in hospitals, birthing centers or even private homes, is declining.

For months, German nurse midwives and their supporters have been protesting for better pay for their services -- wages they say should better reflect the enormous responsibilities that come with the job. Protests have been held in Berlin, Kiel, Essen and Dresden. An online petition organized by the German Midwives Association has gathered hundreds of thousands of signatures, and now the protests are expected to grow. "The federal health minister promised improvements, but nothing has happened," says Edith Wolber of the Midwives Association. Wolber says her organization is going to take a firmer approach in its fight, because these days the job of helping women to give birth is hardly worth the effort -- at least not financially.

The midwives are demanding 30 percent greater pay for the services they provide that are covered by insurance providers with the national healthcare system. However, the pay rise faces an uphill battle since it would require that an exception be made in German legislation limiting the payments made by insurers for certain types of care.

So far, the German Health Ministry has dismissed the criticism. "We are doing much to accommodate these concerns," says ministry spokesman Roland Jopp. He adds the ministry is in the process of commissioning an auditor to look into the situation of Germany's midwives and produce a report by the end of the year. The ministry says it is also open to considering modifying the law.

Midwifery was never a career path that could lead to riches in Germany. Today, an 11-hour birth in a hospital will earn the attending midwife about €224 ($325). A follow-up appointment nets €26, regardless of how long the appointment takes.

Today, the average taxable income of a self-employed midwife is about €14,000 per year. However, insurance premiums can eat up more than one-quarter of that. Over the past five years, the financial situation of Germany's midwives has become increasingly dire: While liability insurance premiums for attending midwives have climbed steeply, the fees these professionals charge for their services have increased only incrementally. Four years ago, liability insurance fees for a midwife cost €1,218 ($1,755) per year. Now, a self-employed midwife who attends births can expect to pay €3,689 in liability insurance fees annually. Those who don't attend births, and provide only pre- and postnatal care, pay a fraction of this cost.

The numbers leave little surprise as to why ever more midwives are leaving their originally chosen profession. In the last year alone, 15 percent have left the career path, according to the German Midwives Association. Today only one-fourth of midwives attend births.

One Mistake Can Cost Millions

According to Katrin Rüter de Escobar of the German Insurance Association, an umbrella organization of private insurers, the increased insurance premiums are the result of an enormous increase in damages that can be extracted in the event of a mishap. The problem isn't that midwives are making more mistakes, but rather that the liabilities have become much greater when one actually is made. "It's not about a broken vase, but a child -- and that costs money," Rüter de Escobar says of the increased premiums, which are often cited as a major problem for Germany's modern midwives. In 1998, the amount of damages paid out by Deutsche Ärzteversicherung, a standard insurer for German healthcare workers, was around €340,000. Within ten years time, however, the potential amount to be paid out for damages related to problems in birth caused by healthcare workers had risen to nearly €2.9 million.

Around 150 babies are born in the Hamburg Birthing Center every year. Midwives here can still afford to attend births because they have developed other means of making money: They offer yoga classes for pregnant women, nutrition courses and instruction on the proper way to carry a babies as well as gatherings for nursing mothers and babies. The center also recently added courses for future grandparents and young siblings of newborns.

The center doesn't accept insurance cards and participants must pay directly. "Our classrooms are at full capacity," says manager Höpermann, "Otherwise it would be too great of a business risk."

But models like the one in Hamburg are unlikely to succeed in small cities or rural areas, where demand is lower. Even in large cities, less well-off areas are suffering from a lack of available care, according to the Hamburg Midwives' Association. Hamburg's Wilhelmsburg district is one example: Residents of this area can't afford prenatal yoga or general birth preparation courses. Expectant parents like Christine from Henstedt-Ulzburg have no choice but to travel for such opportunities.

Midwife Grafe hooks up an electronic fetal monitor and listens to the baby's heartbeat. "When should we leave for the hospital? Once labor starts?" Christine asks. Sooner rather than later, according to the midwife. She also advises Christine to stay in close contact with the birthing center via telephone. She offers one last piece of advice: "No matter what, don't put your husband on the phone. He has no idea how you're doing anyway."