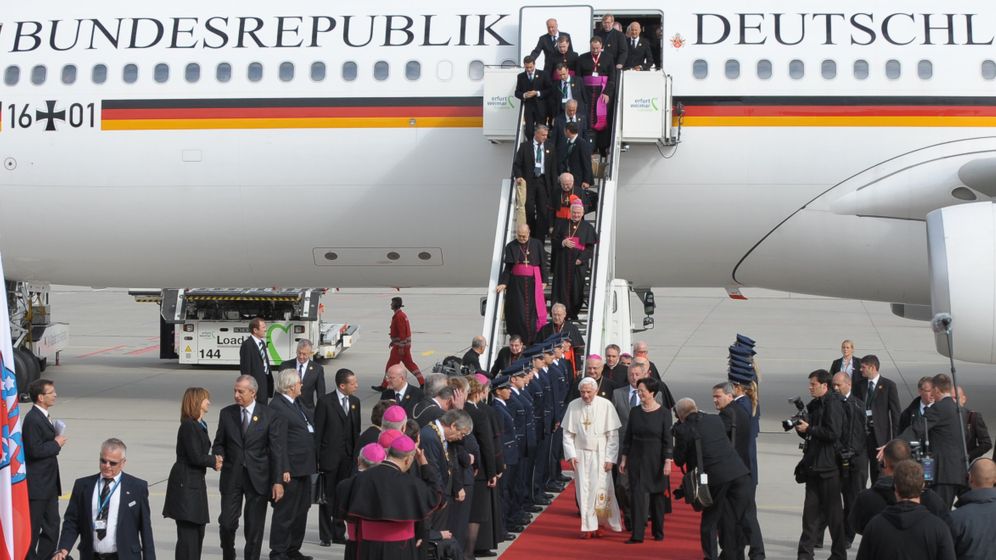 The sky above Rome still had a reddish tint to it as the Alitalia Airbus took off from Ciampino airport at 8:15 a.m. on Thursday, carrying Pope Benedict XVI, several bishops and cardinals and close to 70 journalists on board.

It was the beginning of the pope's four-day visit to his homeland, his first state visit to Germany, and one that has already generated enormous interest in the country, particularly his Thursday afternoon address to the German parliament in Berlin. His core message in Germany is clear: Do not turn your backs on religion; do not turn your backs on the Catholic Church.

But the very first message he sought to communicate on his trip was addressed to his host country Italy. The pope sends a telegram to all heads of state over whose territory he flies when travelling abroad. In addition to the Austrian and Czech heads of state, the pope also wrote to Italian President Giorgio Napolitano.

"The moment in which I leave Italian territory is marked by my wish for an intensive ethical renewal for the good of my beloved Italy," he wrote. The message was difficult to misunderstand, a clear criticism of Prime Minister Silvio Berlusconi and the slow erosion of the country's values and financial stability over which he has presided. The message was all the more powerful coming as it did just days after the country's credit rating was downgraded by Standard & Poor's.

Just moments after touching down in Berlin, the Vatican spokesman Federico Lombardi spoke even more clearly. "In the future, we will all have plenty to do to responsibly address the many problems in the country," he said. One can hardly be more blunt.

After just over 24 hours on German soil, that bluntness would seem to have become the theme of the pope's visit. One of the first things the pope said upon arrival was a lamentation of the increasing indifference toward religion in Germany. Speaking in the German parliament on Thursday afternoon, the pope warned the gathered politicians against sacrificing their own ideals for the sake of power. And in meetings with Muslim leaders on Friday, the pope praised the "great importance" Muslims placed on religion.

"At times, this is thought-provoking in a society that tends to marginalize religion or at most to assign it a place among the individual's personal choices," he said.

It is tempting, of course, to see such comments as mere empty rhetoric. But the pope seems to know exactly what he is up against on this trip to his homeland. The sexual abuse scandal which shook the Church in Germany last year is still an open wound. It's a scandal which led to 181,000 Germans turning their backs on the Catholic Church in 2010 alone. Protests have marked, but not marred, his visit so far. Even his speech before the Bundestag was not without controversy -- dozens of parliamentarians stayed away out of protest that his visit violated the separation of church and state.

A Boon for Benedict?

Indeed, many Vatican observers have noted that it could end up being the most difficult trip of his six-year-old papacy. And it could ultimately resemble his trip to Britain last October -- a trip which began with heavy criticism of the Catholic Church and widespread protests only to become a wildly successful visit and a boon to Benedict's image.

Indeed, he seemed to hint at the importance of the trip during his talk with reporters high above the clouds on his way to Berlin. In response to a softball question about how German he still feels as a pope in Rome, Benedict said that one's roots "cannot be severed, nor should they be."

As if in recognition of both the potential pitfalls and the opportunities presented by his visit, Pope Benedict XVI has confronted possible controversy head on. He addressed the abuse scandal early in his visit, urging Germans to stay true to the Church but expressing understanding for those victims and families of victims who have lost faith in the institution. There are, he said, both "good fish and bad fish in the Lord's net."

It was, however, his speech to the German Bundestag which has been the most parsed since his arrival. Even before he got to Berlin, Vatican observers, studying the speech on the plane on the way to Berlin, were astounded at what they read. It was as if the old Joseph Ratzinger had returned, the theology professor who never really wanted to become pope.

He did not mince words. He spoke about nature and reason and demanded from the parliamentarians an increased sense of moral responsibility for ecology and equality. It was a very political speech. It was courageous. And it was unique.

A politician's "fundamental criterion and the motivation for his work as a politician must not be success, and certainly not material gain," the pope said. "Politics must be a striving for justice, and hence it has to establish the fundamental preconditions for peace." A politician's success, he continued, should be "subordinated to the criterion of justice, to the will to do what is right, and to the understanding of what is right." Pointedly, he added "we Germans … have seen how power became divorced from right, how power opposed right and crushed it."

The pope flew to Erfurt on Friday morning, where he visited the monastery where Martin Luther lived before he turned his back on Catholicism. It is a stop which is being seen as a gesture of reconciliation. But judging from his first day in Germany, one can expect that Pope Benedict XVI will make sure that the message of the visit is clear. In all its bluntness.

With reporting by Fiona Ehlers