At 8:30 a.m. on Wednesday morning, Thomas Haldenwang, head of the Federal Office for the Protection of the Constitution (BfV), Germany's domestic intelligence agency, invited his colleagues from the state offices to join a video conference. They didn't know for sure what the focus of the meeting would be. But they had a pretty good idea: The far-right party Alternative for Germany (AfD) is seen as a "suspected threat" by the BfV.

That would mean that party officials could be placed under surveillance using tools available to the secret service: observing meetings, reading emails and listening in on phone calls. AfD parliamentarians would remain off limits. On Friday, however, the Administrative Court in Cologne ruled that such surveillance could not begin until a ruling can be made on an expedited action filed by the party. The AfD is taking legal action in an attempt to block the BfV from proceeding with surveillance.

Were it allowed to go ahead, it would be a historic move against a party that began as a conservative, anti-euro movement to one suspected of being hostile to democracy. The decision to take the step was also – for the BfV and Interior Minister Horst Seehofer – a rather delicate undertaking, both politically and from the perspective of German constitutional law. On the eve of state elections in Baden-Württemberg and Rhineland-Palatinate, and half a year before the general election in Germany, the BfV is taking aim at the country's largest opposition party.

As such, the reaction from AfD party co-heads Jörg Meuthen and Tino Chrupalla was hardly surprising. There is absolutely no basis for the surveillance, they said, "and it will not be held up in court," they wrote in a statement.

But in the view of the BfV, there is no alternative. The agency believes that since 2019, when they began taking a closer look at the AfD, the party has slid even further to the right-wing extremist fringe. As such, the BfV leaders felt there was no way around it.

The AfD report compiled by the domestic intelligence agency is 1,001 pages long and includes exculpatory material that runs counter to suspicions of right-wing extremism. Most of it, though, is rather incriminating.

In compiling the report, which DER SPIEGEL has obtained, lawyers and experts in right-wing extremism examined hundreds of speeches, Facebook postings and appearances by AfD politicians at all levels of the party. The report includes statements from 302 functionaries, 88 of them at the federal level.

BfV agents only used publicly available material for the report. But the agency is nevertheless convinced that the result is unambiguous: There is, they believe, sufficient proof of the AfD's anti-constitutional leanings to place the entire party under surveillance.

The report reads like a repugnant compendium of horrors. And it demonstrates the degree of separation between large parts of the party and the free democratic basic order. According to the confidential document, the party has a questionable relationship to democracy and human rights. It stokes hatred of Muslims and immigrants, the report concludes, and poisons the climate in the country, potentially to the point that it could spawn violence.

"A substantial portion of the party," the agency writes in the evaluation, is not just interested in injecting a bit of polemics into the debate. Rather, "it seeks to awaken or strengthen a fundamental rejection of the German government and all other parties and their representatives." Other politicians, the report notes, are scorned by AfD functionaries – even at senior-most levels – as "system lackeys" and as "slaves to the old parties" – the term "old parties" being standard right-wing populist terminology to refer to established political parties.

The discourse is even coarser at lower levels. AfD representatives use Nazi-era insults like "Volksverräter" when discussing their political competitors, a racially laden term which essentially means "traitor to your own people." Or they simply call members of other parties "destroyers of Germany." Their favorite target is German Chancellor Angela Merkel, who is frequently denigrated by AfD politicians as an "East German-educated enemy of democracy." On Feb. 17, 2020, a local AfD chapter in Lower Saxony posted a photo of the chancellor in social media along with the sentence: "Those who wonder why Hitler wasn't stopped should also ask themselves why Merkel is still in office."

The party has become even more radical during the coronavirus pandemic, according to the BfV.

In this distorted view of Germany, the AfD is seen as the country's savior. As the AfD chapter in Rostock put it, the party is "the last firewall standing in the way of a complete gleichschaltung," another Nazi-era term that refers to the elimination of all dissenting voices. The BfV notes in its report that the comparison of the political situation in Germany with dictatorial or authoritarian regimes is rather "striking" given that AfD politicians have repeatedly allowed themselves to be "instrumentalized for propaganda purposes" by Russia and Syria.

The authors of the report also discuss at length how dangerous the "perpetual defamation of and contempt for the democratic order and the party's political opponents" can be. The storming of the Capitol in the U.S., the authors write, clearly demonstrates as much, and they also go on to note that there have been concerning incidents in Germany as well, such as the occupation of the steps of the Reichstag, Germany's parliament building, last summer combined with the intrusion into the Bundestag by agitators – "some of whom," the report notes, "were there at the invitation of AfD representatives." The document says that "violent resistance, at least among parts of the party, cannot be excluded."

Even More Radical in the Pandemic

Almost 150 pages of the report are devoted to connections between AfD functionaries and right-wing extremist groups like the Identitarian Movement or the anti-refugee initiative "Ein Prozent" (One Percent), with which Björn Höcke, the right-wing extremist head of the AfD party in Thuringia, has shown some sympathy.

Fellow party member Hans-Christoph Berndt, floor leader for the AfD in the Brandenburg state parliament, is one of the leaders of the Association for the Future of the Homeland ("Verein Zukunft Heimat"), which BfV officials say regularly holds "Islamophobic and xenophobic demonstrations" and which has connections to the neo-Nazi milieu.

The party has become even more radical during the coronavirus pandemic, according to the BfV. AfD functionaries at all levels – all the way up to honorary party head Alexander Gauland – regularly fulminate against an alleged "corona dictatorship" that must be defeated. Germany, they say, is being ruled with "emergency powers," federal parliamentarian Hansjörg Müller claimed at a Berlin rally. Jens Maier, a radical AfD member from Saxony, says the Infection Protection Act is an "enabling act" ("Ermächtigungsgesetz"). Both references – to emergency powers and to the enabling act – are again clear allusions to Nazi-era terminology. Hitler used emergency powers and the enabling act to put an end to the Weimar democracy in 1933.

More on the Right Wing

Petr Bystron, also an AfD member of the German parliament, posted a caricature of Bavarian Governor Markus Söder on Twitter in September. It showed Söder wearing a corona mask shrunken down to look like a Hitler mustache on his upper lip. A sentence next to it read: "Never wash your (mask) at temperatures above 88 degrees." In neo-Nazi numerology, 88 is shorthand for "Heil Hitler," since "H" is the eighth letter of the alphabet.

For the AfD, German domestic intelligence officials believe, the narrative of an alleged Islamization of Germany is central. Muslims are "sweepingly denigrated, vilified and repudiated" by the party, the report notes. AfD representative Lars Schieske from the state of Brandenburg wrote, for example: "It is not possible to integrate Muslims."

The BfV has also identified anti-Semitism within the AfD, particularly at the local levels. Over and over again, members allude to a putative global elite that is pulling the strings behind the scenes. On YouTube, officials found a video of an appearance by Höcke at a local AfD chapter just outside of Berlin. In the video, he declaims a "global monetary elite" that has allied with "crypto-communists." Their alleged goal: a world "without cultures and nations."

One of the primary reasons why German domestic intelligence officials are now targeting the party in its entirety is the ongoing influence of the so-called "Flügel" or "Wing," the right-wing extremist group inside the AfD. The group, of which Höcke acted as a leading voice, was formally dissolved by the party a year ago after the BfV announced it was placing the Flügel under surveillance. But officials believe its influence has continued to grow, nonetheless. The Flügel, the report reads, is not some "meaningless splinter group" within the AfD. Rather, it is "an influential current." The report notes that all AfD parliamentary floor leaders in eastern German state parliaments belong to the network. Its "constitutionally hostile aspirations" have "seeped through the entire party," BfV officials write.

As proof for the support enjoyed by the right-wing radicals, the BfV points, for example, to a statement made by Gauland. "Mr. Hocke represents the center of the party," he said. The report does mention that co-party leader Meuthen's attempt to distance himself from the Flügel at the AfD party congress last November could be seen as exculpatory. In his speech, Meuthen attacked the radical grouping and warned against associations with the Nazi period. Such links, he said, represent an "implicit trivialization of the horrific crimes of that dark era."

In the vote for party leaders that subsequently took place, the BfV wrote, showed just how large the Flügel camp really is. They weren't able to defeat Meuthen, but they attracted the support of around 45 percent of the delegates. That shows, the report notes, that a significant chunk of the party supports "openly extremist" positions.

Eighty pages of the report are filled with numerous examples of the influence exerted by the Flügel at the federal, state and local levels – and continues to exert today. The BfV even performed a quantitative analysis of the AfD presence in social media networks, for which it examined 676 individual accounts belonging to 473 AfD party functionaries who do not explicitly belong to the Flügel. Of those, 64 percent have links to accounts belonging to Flügel members while 52 percent reacted to or shared messages posted by Flügel members. The official dissolution of the network, the BfV says, hardly changed the situation at all.

The Office for the Protection of the Constitution speaks of "two blocks" in the party, one assembled behind Meuthen and the other behind Höcke. In addition to former members of the Flügel, Höcke's backers also include influential party members at the federal level, such as co-party leader Chrupalla and the party's two floor leaders in federal parliament, Alice Weidel and Gauland.

The party remains characterized by "division," the BfV report notes. But the state cannot wait around for the AfD to find a resolution to its internal conflicts, the authors of the report write. It is necessary to "observe and understand" what is going on. And if the Flügel does ultimately get its way, the report notes, then the suspicions of hostility to the constitution will have been confirmed. 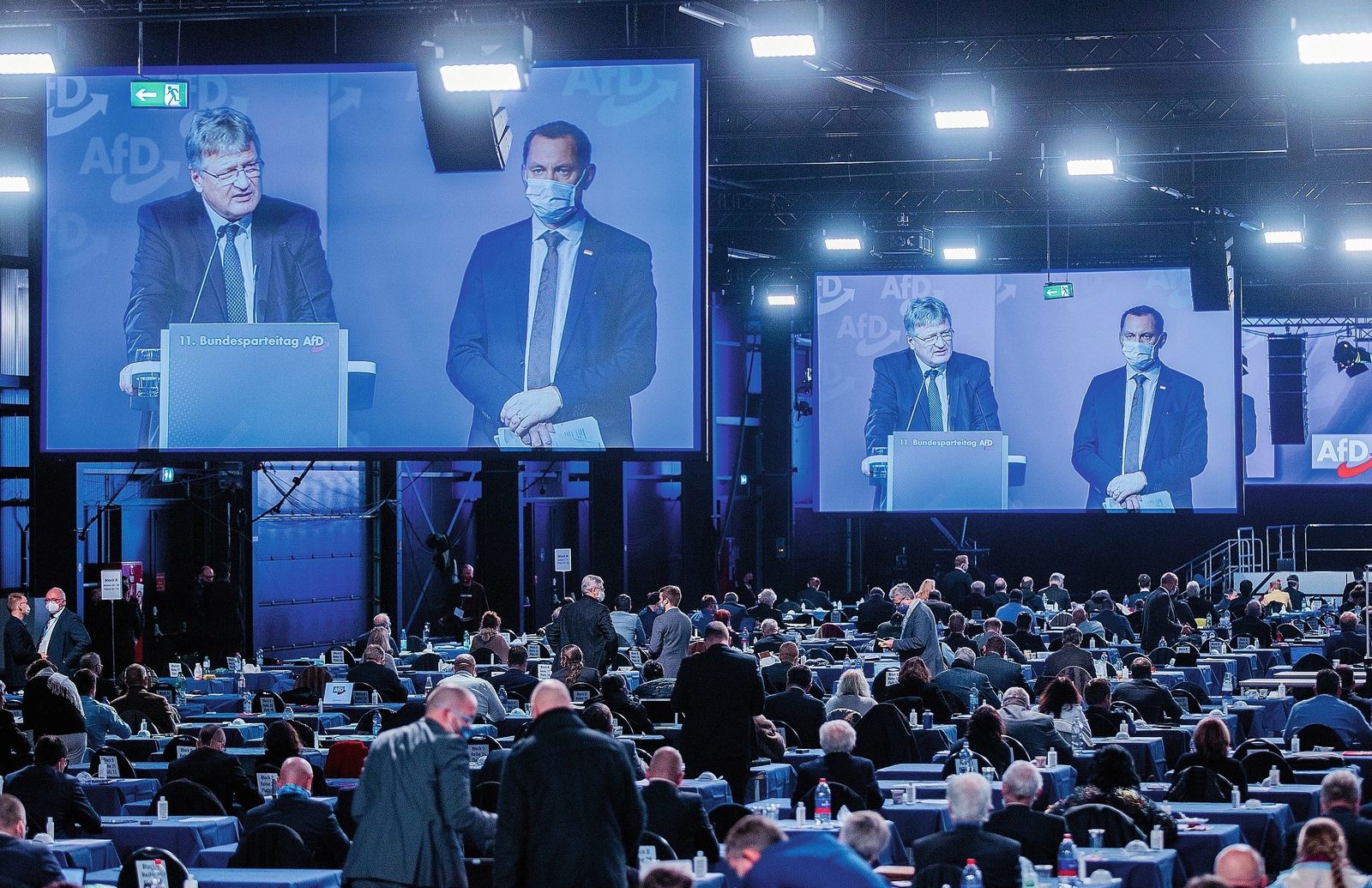 Delegates at the AfD party congress in November.