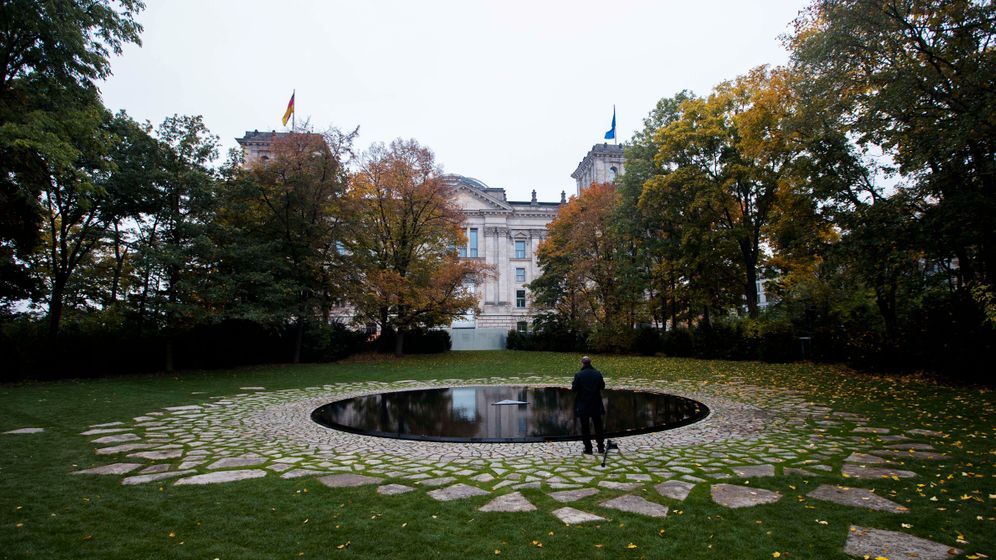 Photo Gallery: A Roma Monument for the Present Day

For years, the northeastern-most corner of Berlin's large, city-center park called the Tiergarten was simply blocked off. The barriers hid a small construction site under the trees, but little work ever seemed to be done. It looked like a project that would never be completed.

But on Wednesday, it finally was. German Chancellor Angela Merkel, Federal President Joachim Gauck and several other political luminaries gathered under Berlin's overcast skies to inaugurate the memorial to the some 500,000 Sinti and Roma murdered by the Nazis in the Porajmos -- as European gypsies call the Holocaust.

The importance of the monument's completion, said Merkel, "cannot be overestimated," adding that it commemorates a genocide to which "far too little attention has been paid for far too long."

Merkel also noted that, at a time when Sinti and Roma remain targets of right-wing attacks, and even official oppression, in Europe, the monument is as timely as ever. "It is a German and a European task to support (Sinti and Roma) wherever they live, no matter what country," she said.

A Long Time in Coming

The monument is located just across a busy arterial from the Reichstag, where the German parliament meets, and not far from the vast monument to the Jews murdered in the Holocaust, which opened in 2005. Also nearby is the memorial to the gays and lesbians targeted by the Nazis, which was unveiled in 2008.

The monument to the Sinti and Roma victims of the Holocaust had a difficult birth. In the early 1990s, Lea Rosh insisted that a planned Holocaust memorial in central Berlin -- one that the German journalist and political activist had led efforts to build -- be dedicated exclusively to the some 6 million Jews murdered by the Nazis, leading other groups persecuted by the Third Reich prior to and during World War II to begin lobbying for their own monuments.

The memorial inaugurated on Wednesday is a product of that initial push. It was designed by Israeli artist Dani Karavan in 1992 and includes a round reflecting pool surrounded by broken slabs of stone. In the pool's center is a triangular platform supporting a single rose. Once a day, the platform sinks below the surface and returns with a fresh flower.

Yet despite having agreed on the design, Sinti and Roma representatives argued for years about the appropriate inscription. Questions about financing likewise slowed the project. Ultimately, however, the German federal government picked up the tab for the €2.8 million ($3.6 million) project and the poem "Auschwitz," by Roma author Santino Spinelli, was chosen for the inscription.

The mass murder of Europe's Sinti and Roma population was set in motion even prior to that of the Jews. In 1938, Heinrich Himmler, who was head of the infamous SS, distributed an order for the formulation of a "final solution to the gypsy question." It remains unclear exactly how many were ultimately murdered in the Nazi death camps, but the most reliable estimates indicate a total of half a million. It was not, however, until 1982 that the genocide was officially recognized by the German government.

But like Merkel, Romani Rose, head of the Central Council of German Sinti and Roma, emphasized the current importance of the monument. Both earlier this week and again at Wednesday's ceremony, he highlighted the persecution of Sinti and Roma in many countries in Eastern Europe -- and also in Germany itself.

In a conversation with SPIEGEL ONLINE earlier this week, Rose said: "Our minority lives in a sometimes very threatening situation in Eastern Europe, in which uniformed right-wing extremists march through villages and frighten people."

On Wednesday, he issued a similar warning. "In Germany and in Europe, there is a new and increasingly violent racism against Sinti and Roma," he said. "This racism is supported not just by far-right parties and groups; it finds more and more backing in the middle of society."

With reporting by Karoline Kuhla