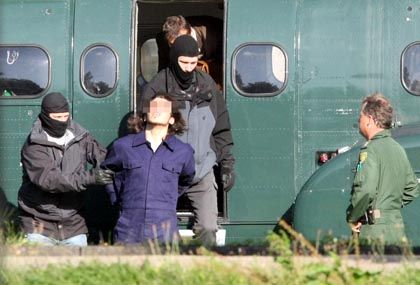 One of the suspects is taken from a helicopter outside the court in Karlsruhe Wednesday.

The scenarios which the highest representatives of the German security forces were describing on Wednesday morning were horrific: "Massive bomb attacks," simultaneous attacks using several car bombs and huge numbers of people killed right in the middle of Germany. Only a bold raid foiled the plans of the Islamist terrorists, according to statements made in Karlsruhe by German Federal Prosecutor Monika Harms and Jörg Ziercke, the head of Germany's Federal Criminal Police Office (BKA).

According to Harms, the three men arrested Tuesday afternoon belong to a German cell of the terror group "Islamic Jihad Union" (IJU). They are accused of preparing terror attacks against US facilities in Germany.

It would have been an inferno. The explosive material the men had would have sufficed to make bombs with a higher explosive power that those used in the attacks in Madrid and London, according to Ziercke.

The three men had planned on mixing the explosive material so as to produce a bomb with the power of 550 kilograms (1,200 pounds) of TNT. The federal prosecutor's office ordered all three men arrested Tuesday afternoon. The police forces struck in a spontaneous raid because the men, who were already under observation, intended to begin preparing chemicals to make a bomb and to leave their hideout.

Fearing that the men might disappear, BKA investigators and Germany's elite GSG-9 anti-terrorist unit arrested the whole group in Medebach-Oberschledorn in the state of North Rhine-Westphalia. Later, the BKA conducted searches, in which hundreds of officers took part, of another 40 buildings in several German states.

The three suspects were arrested in a holiday apartment where they had chemicals based on hydrogen peroxide, a substance that can be transformed into explosives using a complicated procedure. Security sources have told SPIEGEL ONLINE that this is exactly what the men had attempted to do. Similar concoctions have already been used in other terror attacks.

It was when the men began to process the legally obtained 730 kilograms of chemicals that the authorities became alarmed. A few days ago, police experts secretly swapped the 35-percent solution of hydrogen peroxide contained in 12 barrels for a diluted liquid that only contained 3 percent of the chemical. "Concrete preparations had begun, so we had to act," said one official.

They were still far from having a finished bomb, however. "It wasn't a case of coitus interruptus," commented one official. However, according to information obtained by SPIEGEL ONLINE, the men had all the necessary components ready -- they had even already procured a military ignition mechanism for the explosive device. "An attack was imminent -- it was only a question of time," said one high-ranking security expert. Probably the men wanted to place the bombs in one or more cars and explode them in front of the target.

The goal of the men was clear. "The intention was to commit an attack and cause as many deaths as possible," said the official. The investigators were mainly concerned that the three men had been acting conspiratorially in the last few weeks and possibly were planning to split up after the meeting in Oberschledorn and work further on their plan even more inconspicuously. Out of fear of losing track of the group and their activities, the police decided to strike.

One of the men attempted to escape through the bathroom window during the raid. He tore the gun out of the hand of a police officer who challenged him. In the following scuffle, a shot was fired and the police officer was lightly injured on the hand.

The arrests came after an extensive investigation carried out by federal prosecutors. Agents had been on the heels of the group surrounding 28-year-old Fritz G. -- one of those taken into custody on Tuesday -- since the end of 2006. Together with Daniel S. -- likewise a German who had converted to Islam -- and a 22-year-old Turkish man from Hesse named Adem Y., Fritz G. is thought to have founded an Islamist group that was even prepared to carry out suicide attacks in Germany.

Since then, authorities have been watching the group around the clock. Help was provided by local authorities, and US officials also turned over material to the investigation. "Thankfully, collaboration worked well in this case," an official said. Interior Minister Wolfgang Schäuble said the plans never reached a stage where they posed a danger, partly because all the relevant authorities were actively investigating the case.

Members of the group first came to the authorities' attention on New Year's Day 2006. Fritz G. was in a car seen driving around the US military base in Hanau conspicuously often. Officials suspected that he and the other suspects were casing the facility for a possible attack. Soon after, the investigation was stepped up, and in March of this year, an official file was opened by federal prosecutors.

Authorities were shocked, though, when the group continued working on their plan even after the investigation was started. After all, they must surely have known that they were under observation. "That they nevertheless continued shows how determined they were," one investigator said. "We are dealing here with perpetrators who believe devoutly in what they were doing." The investigator also says that the men were prepared to sacrifice their lives to make their attacks a success.

The case also provides still more evidence, officials say, that Germany has become a target of international terrorism. All three of the men had intensive contacts with Pakistan, likely to the Islamic Jihad Union (IJU) which is active there. According to authorities, Daniel S. visited a terrorist training camp in Pakistan in March 2006. According to information obtained by SPIEGEL ONLINE, the other two were likewise in Pakistan at the end of 2006 and it is thought that they too spent some time in a training camp. Since then, investigators have intercepted numerous phone calls between the suspects and contacts in Pakistan. The IJU was responsible for a deadly 2006 attack in Uzbekistan but is now primarily active in Pakistan.

It is still not clear which targets the group actually wanted to attack in Germany. In wiretapped conversations, the men spoke again and again about possible targets. Frankfurt airport and other airports were discussed, as was the US airbase at Ramstein and other possible locations such as a nightclub. "There was still no concrete plan," one of the investigators said. "Nevertheless, the intention was clearly recognizable." One of the suspects is said to have clearly stated that he was ready to die a martyr's death.

The results of the investigation against the group gave the government cause for concern for months. Interior Minister Wolfgang Schäuble repeatedly spoke of a clearly increased danger of terror attacks in Germany, referring to the undercover investigation against the group. The US also had evidence relating to the men's connections to Pakistan and warned the German authorities. In addition, the US increased safety precautions at their facilities after the investigations yielded their first results.

The group's radical tendencies are well documented. The investigators have known about Fritz G., who is a well-known member of the radical Islamist scene in Ulm, for a long time. G. is considered a prominent member of a group of radicalized Islamists who settled in Ulm. The other two suspects also obviously had close contacts to this group. The radical activities in Ulm were already known about before the 9/11 attacks, and the authorities kept a close eye on developments there.

The investigators are not yet aware of a schedule for the possible attacks. According to a statement by top officials, it is possible that the attacks could have been planned to coincide either with the anniversary of 9/11 or with the decision to extend the mandate for Germany's deployment in Afghanistan, which is expected in the autumn. The chemicals which the group obtained have a short shelf-life -- hence time was of the essence. However it is questionable whether the group could have completely finished the complex process of building the bombs by either of those dates.

The authorities are now hoping for further information to come out of the interrogations of the suspects. Further arrests cannot be ruled out, according to the Federal Prosecutor's Office. First, however, the three men are to be presented to the judge handling the case. He has already issued an arrest warrant.