It's no secret that the US would love to see its NATO allies send more troops to Afghanistan. In Germany, though, such desires have been highly unpopular, with a slew of politicians having voiced opposition to the idea in recent weeks.

Now, however, with the Afghanistan conference set to take place in London on Thursday, the government in Berlin may be willing to send more Bundeswehr soldiers to the war-torn country after all.

Chancellor Angela Merkel met with Foreign Minister Guido Westerwelle, Defense Minister Karl-Theodor zu Guttenberg, Interior Minister Thomas de Maizière and Development Minister Dirk Niebel at the Chancellery in Berlin on Sunday evening to discuss the issue. According to a Monday report in the regional newspaper Rheinische Post, Merkel, Westerwelle and Guttenberg have already agreed on a common position. They are apparently prepared to increase the number of German troops in Afghanistan by 500 to a maximum of 5,000. The Defense Ministry has denied the report, however. 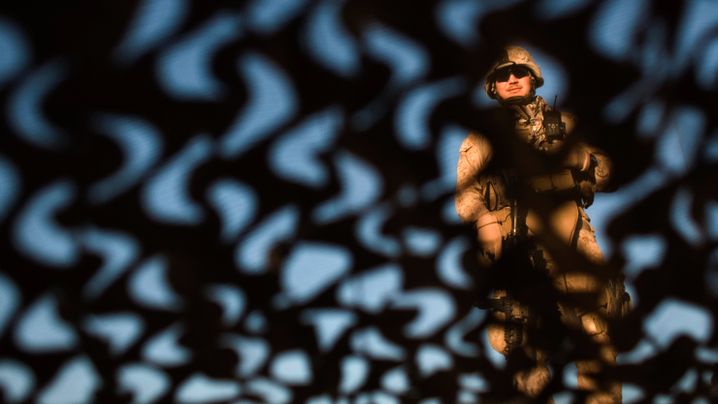 Currently, Germany's Afghanistan mandate sets the maximum number of troops at 4,500. Any increase in troop numbers has to be approved by the German parliament, the Bundestag, and would be controversial among the general population. A majority of Germans want Bundeswehr troops out of Afghanistan as quickly as possible and the mission has become even more unpopular since a German-ordered air strike on Sept. 4 killed up to 142 people, several civilians -- possibly dozens -- among them.

Westerwelle said on Sunday evening that he did not oppose sending additional troops. "I never said that there should be no increase in troop numbers," Westerwelle told the German public television station ARD. He added that the most important thing was to look at a possible "redeployment" of resources within the existing Bundeswehr contingent, and that only "at the very end" could the question of additional troops be discussed.

In recent weeks, there have been a number of media reports that Westerwelle had, in internal government meetings, vehemently opposed proposals by Guttenberg to increase troop levels. According to a report by the news agency DPA on Friday, Guttenberg was considering increasing troop levels by 1,500 soldiers.

In addition to Westerwelle's comments, Merkel and de Maizière also raised the prospect of an increase in troop numbers in interviews over the weekend. However they also called for a much greater emphasis on the training of Afghan forces so that responsibility for security in the country can gradually be transferred to the government in Kabul.

Merkel will be holding talks with Afghan President Hamid Karzai on Tuesday ahead of Thursday's summit. The Chancellor is also scheduled to give a statement to the Bundestag on Wednesday regarding the country's evolving strategy in Afghanistan.

According to information obtained by SPIEGEL, the German government is prepared to offer at the conference a massive increase in its bilateral police mission. Plans drawn up by the German Interior Ministry foresee German experts training half of the 30,000 additional Afghan police which are needed to bring the Afghan National Police up to its target level of 110,000 officers by the end of 2012. Around 30,000 Afghans have already taken part in German police seminars since they began in 2002.

The German government also announced on Sunday a program to support Taliban who wanted to return to civil society. Many people joined the extremist group "not out of fanatical conviction but because of economic necessity," Foreign Minister Guido Westerwelle told the newspaper Bild am Sonntag. "We want to offer these people economic and social prospects for themselves and their families. We will also make additional money available to this end." Westerwelle added that "there would be a completely new approach to the reintegration of insurgents in society" at the London conference.

General Stanley McChrystal, the commander of NATO forces in Afghanistan, also raised the prospect of a negotiated peace with the Taliban in an interview with the Financial Times published Sunday. He said the arrival of the additional 30,000 troops pledged by Obama could weaken the insurgency to the point that the Taliban could be ready for a political solution. "As a soldier, my personal feeling is that there's been enough fighting," he said. He also did not rule out the possibility of Taliban leaders being part of a future government in Kabul. "I think any Afghans can play a role if they focus on the future, and not the past," he said.

On Sunday, Afghan election officials announced that upcoming parliamentary elections, which were originally scheduled for May 22, have now been postponed until Sept. 18. The move apparently came in response to pressure from Western diplomats, who had been trying to persuade Karzai to postpone the vote to allow more time for reform of key electoral institutions in a bid to prevent the kind of electoral fraud that marred Karzai's re-election last year.

10 Bilder Photo Gallery: 'We Have to Eat, Drink and Die with the Afghans'