It was an elegant bit of political strategy. Just recently, German Chancellor Angela Merkel suggested to close political ally Horst Seehofer that he should meet personally with Finance Minister Wolfgang Schäuble to discuss first hand the reasons why the euro backstop fund needs to be bolstered. Seehofer, Merkel suggested, could then explain to Schäuble just why his party, the Christian Social Union (CSU), was so opposed to boosting the firewall.

The resulting Feb. 23 meeting -- and Merkel's role in setting it up -- shines a unique spotlight on the challenges facing her government as international demands continue for a radical enlargement of the European Stability Mechanism (ESM). Seehofer, who heads up the CSU -- the Bavarian sister party to Merkel's Christian Democrats, is strictly against increasing ESM funding, while Merkel herself remains extremely skeptical of any such plan.

And things aren't likely to get any easier in the near future. In a draft of its most recent report, the troika -- made up of the European Commission, the European Central Bank and the IMF --said that it is not guaranteed that Greece will be able to secure financing on the financial markets by 2015. Between 2015 and 2020, it continued, Greece might have "external financial needs of up to €50 billion."

The money would have to come from euro-zone member states in the form of yet another bailout package. Pressure from Germany and others led to the removal of the passage from the draft.

Not surprisingly, Seehofer and Schäuble were unable to reach agreement at their ESM meeting. The finance minister described the international pressure Germany was under and explained how his friend Christine Lagarde, head of the International Monetary Fund (IMF), had said that her organization would only play a role in future aid packages if the Europeans committed more money.

Seehofer, for his part, pointed to resolutions passed within his own party. The CSU is unwilling to go beyond the €211 billion ($278 billion) Berlin has already pledged to the ESM. It would be extremely difficult, he added, to get the CSU to agree to more money.

More than anything, the meeting served to demonstrate just how isolated the finance minister has become. When it comes to boosting the ESM beyond the €500 billion currently planned for the fund, which is set to go into force this summer, Schäuble is alone in Berlin.

Nevertheless, Schäuble has already instructed officials at his ministry to search for possible ways to get around Article 39 of the ESM treaty, which is currently being ratified by euro-zone member-state parliaments. The text of Article 39 specifically caps the ESM at €500 billion and states that funds from the previous backstop fund, the European Financial Stability Facility (EFSF), are not to be added on top. "The consolidated ESM and EFSF lending shall not exceed EUR 500 000 million," the article states.

The Finance Ministry, however, thinks it may have found a way around the provision. Should the EFSF be allowed to run in parallel with the ESM, or even to be extended, then the roughly €250 billion remaining in the EFSF would be available in addition to the ESM funding. The total would then be three-quarters of a trillion euros.

Merkel is less than enthusiastic about the trick, but she also isn't happy with the categorical "no" coming from the CSU. Given recent indications that the euro crisis may be calming for the moment, she considers it unnecessary to outfit the ESM with more firepower. At the same time, however, she is not excluding the possibility that she will ultimately be forced to give in to international pressure -- a realization that she has signaled to her European partners. The chancellor, as always, is playing the tactics game to the very end.

Relying on the Opposition

After all, the pressure facing Merkel isn't just coming from abroad. Committing more money to the ESM would endanger her governing coalition, of which the CSU is an important member, along with the business-friendly Free Democrats (FDP). An initial crack appeared last Monday. In the vote on the second aid package for Greece, several lawmakers belonging to her coalition chose to oppose the bill -- more than ever before since the beginning of the euro crisis.

Furthermore, her much-touted fiscal pact, which European leaders signed at a summit in Brussels last Friday, faces significant hurdles as well. Because the treaty cedes sovereignty to Brussels, its passage will require a two-thirds majority of both the Bundestag and the Bundesrat, Germany's upper legislative chamber. Merkel will have to rely on opposition support for the measure's passage.

What's more, Seehofer has repeatedly warned Merkel that his patience with euro-rescue efforts has limits. The CSU head can often be found traveling around Bavaria to gauge whether political sentiment has reached a tipping point. He's found that the idea of giving more and more money to heavily indebted euro-zone countries is not very popular.

Furthermore, the CSU has clearly defined the point at which euro-rescue efforts should end. If Germany has to be on the hook for more than €211 billion, it would mean the end of the CSU's support for the government's efforts.

Seehofer is not in a position to simply readjust this line in the sand. If Germany increases its liability, he intends to convene an extraordinary meeting of his party's leadership and perhaps even an emergency party summit. As such, it seems unlikely that Merkel would be able to agree to an increase in ESM funds at the EU summit scheduled for March.

Seehofer says that, if necessary, a party summit could be quickly convened. At the same time, however, he warns: "But we also won't allow ourselves to be pressured into making a quick decision about these important issues."

It is generally assumed that there is no chance that a CSU party summit would rubber stamp an increase in ESM funds. "I see no need to bolster the ESM," says Stefan Müller, a senior CSU parliamentarian in Berlin. "What's the point of putting more money in the display window?"

Johannes Singhammer, the deputy chair of the CDU/CSU parliamentary group, has likewise already warned of the "unpredictable side effects" of a party summit. The suggestion is clear. If the CSU exercises its veto, Merkel's coalition would likely be finished.

Seehofer is anxious to get his party's euro-skeptics under control. At a meeting of CSU party leaders on Feb. 18, he drew attention to a memo developed by his staff indicating that the second bailout package for Greece was compatible with previous CSU resolutions.

But CSU euro-skeptics Peter Gauweiler and Thomas Silberhorn dismiss such notions. Seehofer, they believe, crossed his line in the sand long ago. "If we don't limit the financial assistance," Silberhorn says, "we will run up against the limits of political acceptance."

And its not just second-tier CSU politicians who are raising a ruckus. Last Monday, Interior Minister Hans-Peter Friedrich, a member of the CSU, became the first member of Merkel's parliament to argue openly for a Greek exit from the euro zone, telling SPIEGEL that "Greece's chances to regenerate itself and become competitive are surely greater outside the monetary union than if it remains in the euro area."

Transportation Minister Peter Ramsauer, likewise of the CSU, is unhappy as well. He said he would only agree to the Greek aid package "with fists clenched in my pockets." 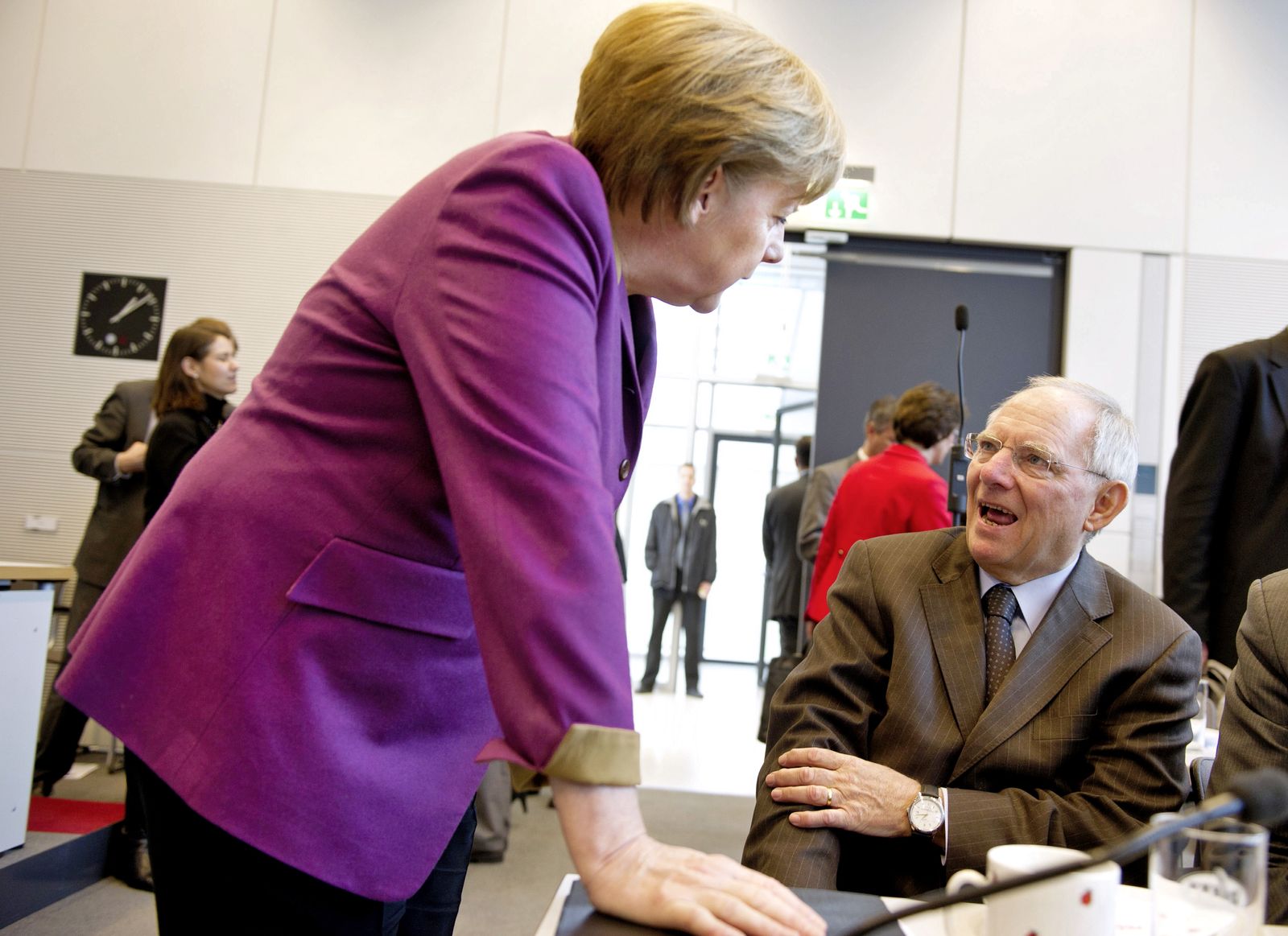 Merkel and Schäuble are at odds about expanding the European Stability Mechanism.