There's a question that keeps bothering Abdul Abbasi. "Do you want to go back to Syria?" It's a question he faces constantly, both when he meets new people and when he encounters old friends. "People don't mean it the wrong way. Often, it's genuine interest," the 25-year-old says. "But I'm tired of it."

It's not just constantly having to repeat himself that Abbasi is tired of. The whole issue gets to him. When he starts thinking about it, he's suddenly no longer the dentistry student at the University of Göttingen. He's a refugee all over again. "It throws me all the way back to zero," he says.

It evokes memory of Aleppo and a life that is now long behind him, one that can never be the same again. And Abbasi wonders how long people will continue asking him about his potential return to Syria. One year? Five years? Until he becomes a naturalized German citizen? Forever?

Abbasi came to Germany in 2013. He now speaks fluent German, has a German girlfriend and will soon hold a degree from a German university. He wrote a book about life in Germany together with his friend Allaa Faham and the two have a YouTube channel called GermanLifeStyle. Abbasi is currently working on a play that will debut at the Deutsches Theater in Göttingen next March. The German government has even bestowed Abbasi and Faham with its integration medal. It would be hard to do much better.

But even as Germany has long since become home to a person like Abbasi, the public debate over the possible return of Syrians living in exile in Germany is growing louder. "Refugees are guests, not immigrants," the Stuttgarter Nachrichten newspaper wrote in an editorial a few weeks ago.

It is true that in many parts of Syria, the Islamic State (IS) terror militia has been largely defeated and no longer poses much of a threat. But the country is still ruled by dictator Bashar Assad, who is responsible for the deaths of countless people.

Germany's federal and state interior ministers made the decision nearly two weeks ago to extend the moratorium on deportations to Syria, but only until the end of the year. The states of Baden-Württemberg, Bavaria and Saxony are all demanding that the security situation in Syria be subjected to continuous review, so that when it improves, they can deport refugees convicted of crimes or those who are deemed a danger to society.

Some of the rulings currently being issued by the Federal Office for Migration and Refugees (BAMF) seem almost cynical. One letter to a Syrian asylum-seeker who came to Germany in 2019, for example, stated that although "isolated attacks are still taking place that can also lead to civilian deaths," it no longer rises to the level of "a blanket threat to all civilians living there." The agency ruled the applicant could not be deported, but it did not grant refugee status. The lesser status translates to fewer rights and does not permit the person receiving it to bring family members to Germany.

The situation is nerve-racking for many of the 500,000 Syrians who have come to Germany since 2015. They turn to news sources like the Arab-language Facebook page of German international broadcaster Deutsche Welle for every scrap of news on Interior Minister Horst Seehofer or BAMF.

The view exiled Syrians have toward the return discussion is colored by their individual situations. Some fear they could soon lose their residence permits. Others are afraid they won't be allowed to bring members of their family to Germany. Most Syrians, though, agree that they don't want to go back at the moment. Just under 1,000 Syrians voluntarily returned to their country of origin last year, according to the German Federal Police, an extremely low figure.

Abbasi knows that, as a soon-to-be graduate of a German university with plenty of references, he will have no problem staying in Germany. But the new attitude in Germany toward Syrians is also affecting him. People don't always just ask if he will return at some point. In the social networks, he frequently receives messages like: "Go back where you came from!!!"

Tarek Ahmad, 38, has also noticed how German politicians' perceptions toward Syrians have shifted. The archeologist arrived in Germany in 2015 and works at the Free University of Berlin. He has photos of the ruins of Syrian temples and excavation sites affixed to the walls of his office -- images of places he misses.

"At first, its sounds justifiable that people want to get rid of criminals," Ahmad says. "But I fear that it could be the first step in a longer process. It will help people get used to the idea of deportations to Syria. And at some point, those who don't have jobs or don't speak German well enough will follow."

Ahmad formulates his thoughts in English because he doesn't feel his German is good enough yet. His research fellowship terminates at the end of the year and he still doesn't know what he will do after that. He explains that he already had trouble with Assad's autocratic regime even before the civil war. Early on, he says, his scientific work was promoted and a scholarship was even lined up for him to complete a master's degree in Italy. But once he remained abroad a few months longer than the Syrian state wanted, the authorities began creating obstacles for him. "My career as an academic ended temporarily," Ahmad says.

He is set to become a first-time father in a few weeks and he and his wife are spending a lot of time at the moment trying to come up with a first name for their child. The couple wants to come up with one that "will sound good to Germans but also won't provide any opportunity for teasing." They say they don't want to make the mistake of naming their child Sham, the word for Damascus in Syrian dialect. It's pronounced the same way as shame is in German. "That wouldn't be doing a girl in Germany any favors at all," the archeologist says.

'There's No Question About Returning'

The Ahmads are clear about wanting to stay in Germany. "As long as the Assads rule Syria, there's no question about us returning."

Even after eight years of civil war, hundreds of thousands of deaths and millions driven from their homes, the Syrian dictator family has no reason to fear they will lose power any time soon. The military aid they receive from Russia and Iran is enough to guarantee that. The Syrian Network for Human Rights says that around 82,000 people have disappeared without a trace into Syria's prison system since 2011. It is believed that thousands of them were killed.

For several weeks, bombs have been falling on Idlib, the last rebel bastion in northern Syria. The United Nations estimates that around 3 million people are still living there and that the situation threatens to become a humanitarian catastrophe.

Many Syrians in exile were shaken by the death a few weeks ago of 27-year-old Abdul Baset Al-Sarout. The former goalkeeper of the Syrian national youth football team was struck by a shell in a village in the northwest of the country. Sarout, who lost his father and his four brothers in the war, had become for many a hero of the armed resistance.

A Meeting Point for Assad Opponents

Including Nahla Osman. The 41-year-old lawyer was born in Germany, but her parents are from Aleppo. During the week, she works as a lawyer specializing in immigration law at her practice in the town of Rüsselsheim, near Frankfurt. She often spends her weekends protesting against Assad, with the Syrian revolution flag wrapped around her shoulders.

"The majority in Germany assume that the war has been over since the defeat of IS," says Osman. "They have no idea about what's happening in Idlib right now and what it means for us that Assad is simply able to keep going." She posts calls to protests on her Facebook page, informs people about the situation in Idlib and provides information about legal regulations that are important to refugees.

Osman opposes deportations to Syria even in cases where individuals are considered to be Islamist threats. She believes that if anyone should face the threat of deportation, it should be Assad supporters. The lawyer has launched a campaign against a Syrian Christian who works in the office of a German parliamentarian from the right-wing populist Alternative for Germany (AfD) party and who openly champions Assad as "the best solution for all Syrians." Osman has circulated a sample letter to BAMF on social media calling for the revocation of the man's refugee status. "He should be sent back to Assad immediately!"

Osman's Facebook page has become a meeting point for opponents of Assad seeking to share information about possible supporters of the dictator. She says she has received hundreds of such messages. A fellow campaigner also set up an email address where exiled Syrians with refugee status who may have been involved in war crimes can be reported. The intention is to grant German authorities access to the database.

One person who follows Osman's Facebook page closely is Tabarak Karakouz. The 23-year-old came to Germany at the end of 2017, speaks very little German and is happy to have a source of information in Arabic. "Of course, I want to know the decisions German politicians are making about us," she says. Karakouz is also looking for a way to bring her mother and her siblings, who are currently living in poverty in northern Lebanon, to Germany.

The Karakouz family in Hamburg: "All we can do is wait and hope."

But the rules for bringing family members to Germany are restrictive. Refugees are only allowed to bring their spouses or minor children to the country. The German Foreign Ministry says that family reunion visas were issued last year for around 21,000 Syrians.

Karakouz herself lived for three years without her husband Ammar in Lebanon because she hadn't received papers yet to come to Germany. "All we can do is wait and hope that it changes at some point," she says.

Karakouz and her husband have been living for a few months in public housing in Hamburg's Eimsbüttel neighborhood. Annar worked as a painter for a while, but he is now unemployed and focusing on his German classes. Karakouz stays home with their nine-month old son. She's pregnant again. Karakouz says she loves taking walks through Hamburg because she feels safe here. Sometimes she discusses the possibility with her husband that the Germans might one day send them back to Syria. She says the only thing left of her parent's home after the fighting in Homs is rubble and that her father and uncle were kidnapped by Assad's henchmen. She finds it unimaginable that anyone would expect her to live in the country again.

And what if Assad were no longer there?

"Then yes," she says. "I still have hope that will happen someday. But that is many, many years away." 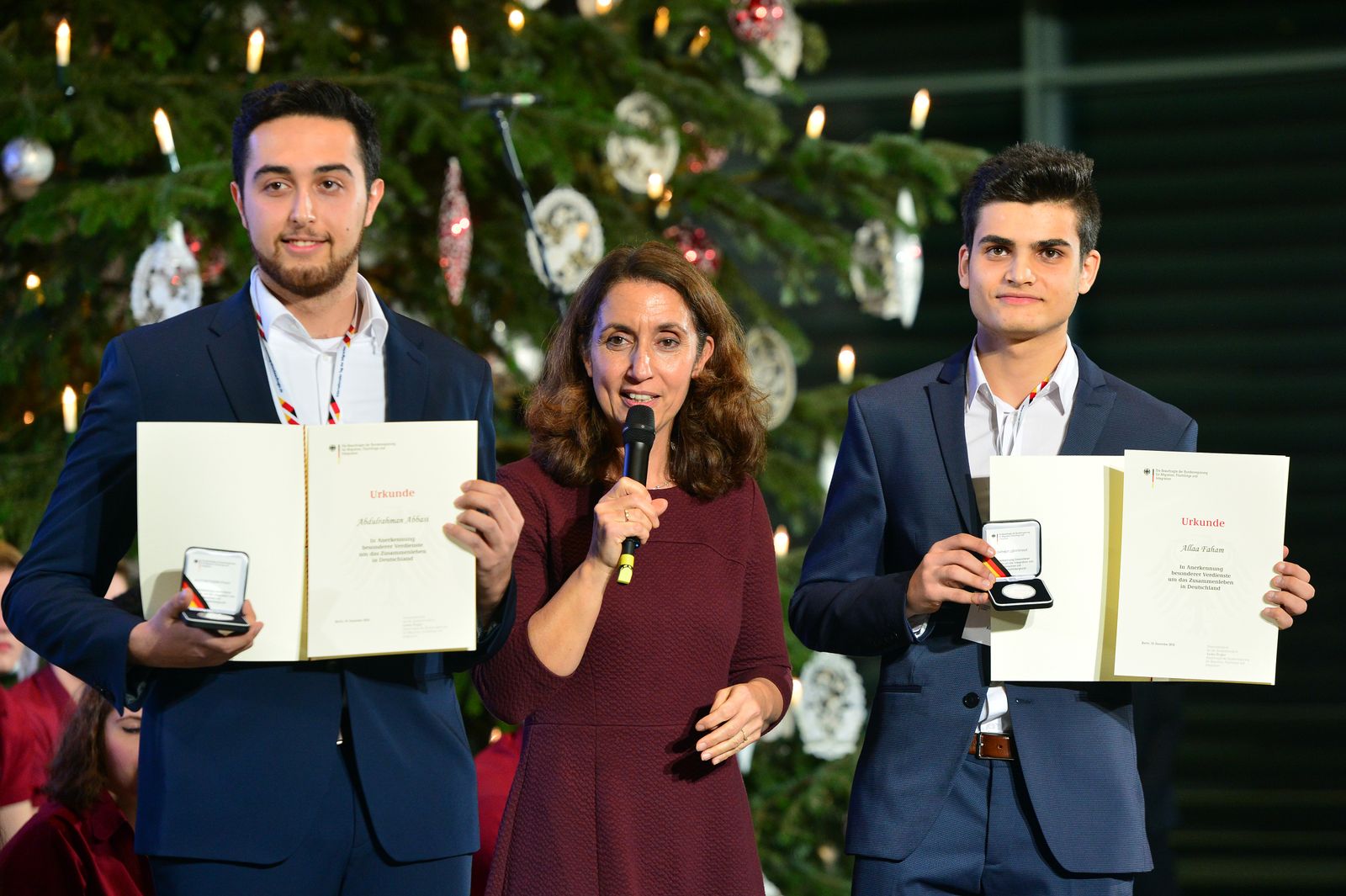 Abdul Abbasi (left) and Allaa Faham (right) receiving their integration medals from a senior government official in Berlin in 2016. 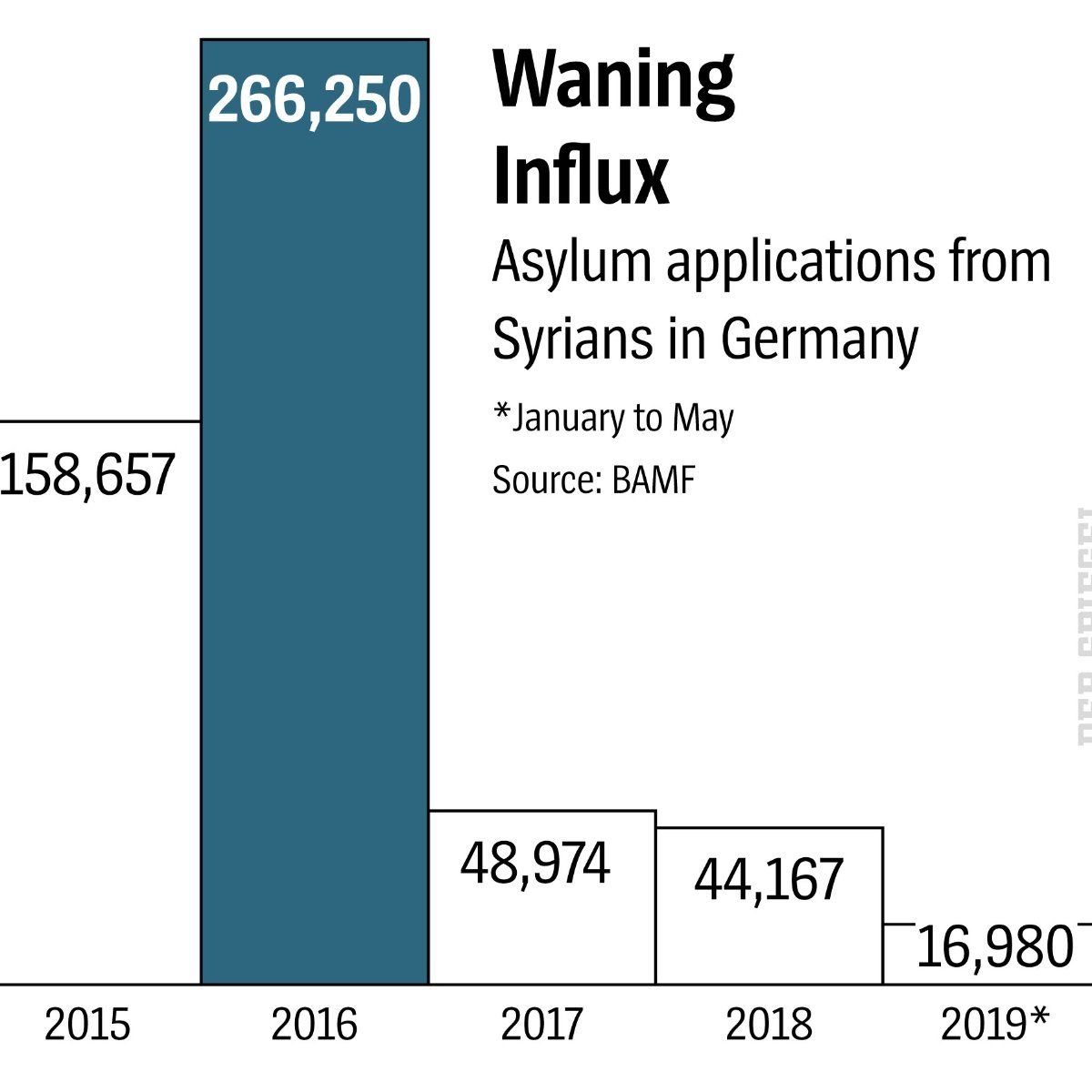 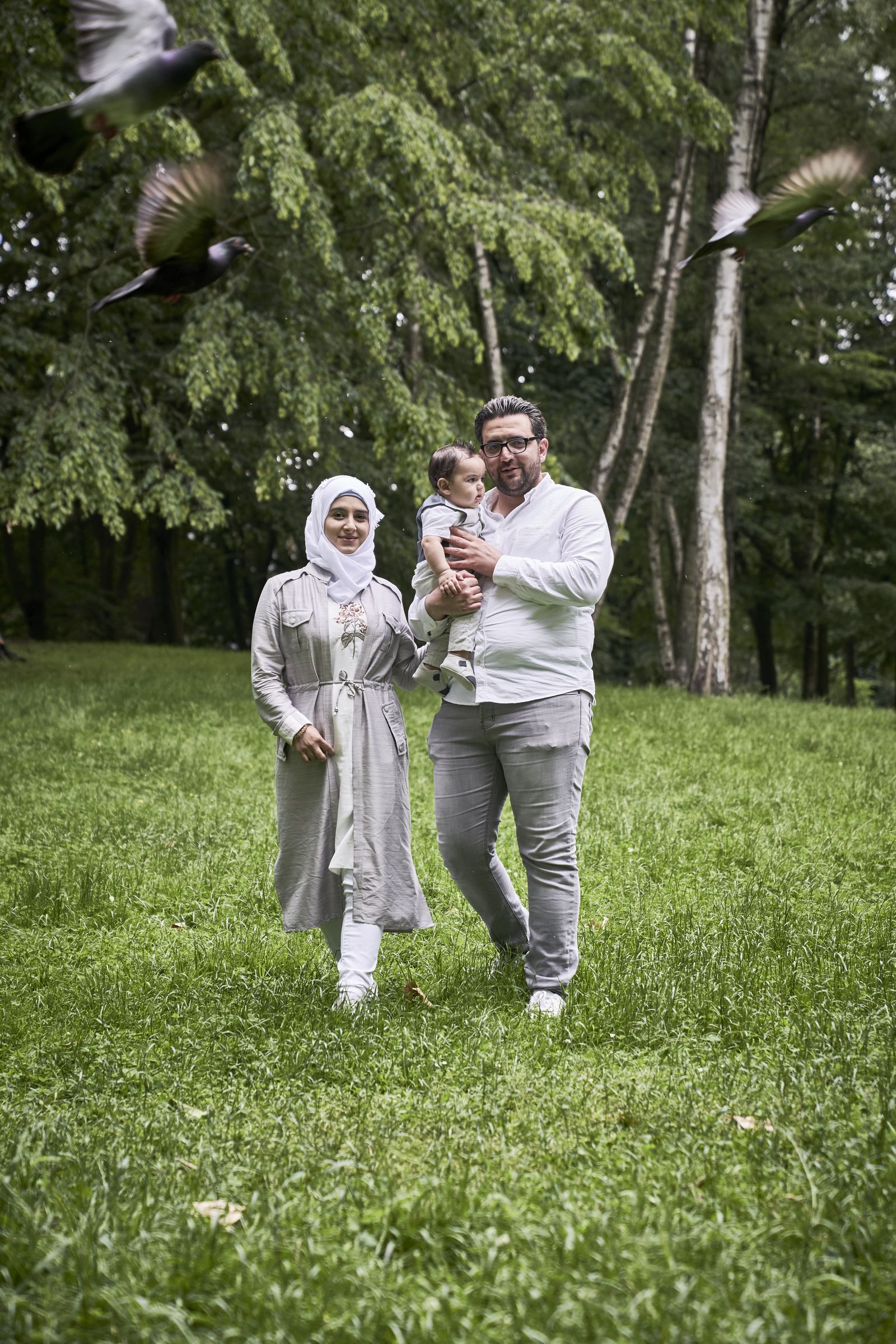 The Karakouz family in Hamburg: "All we can do is wait and hope."