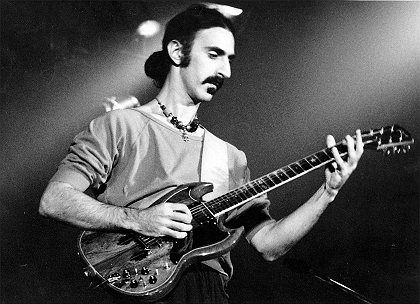 What would Frank Zappa have said?

In the end, it all depends on how you define Frank Zappa. Either the outspoken rock legend was a beacon of freedom and independence belonging to all who hoped for a better political future free from pervasive government interference or he was an awe-inspiringly multifaceted musician whose unique sound and one-of-a-kind presentation is what keeps people listening today.

For most fans, of course, he is both. But a court in Germany on Wednesday has the unenviable task of having to decide between the two.

The case is called ZAPPA Family Trust v. Arf Society e.V., and it centers on a music event known as the Zappanale. Held every summer in the town of Bad Doberan, located close to the Baltic Sea coast in what used to be East Germany, the three day festival attracts thousands of fans eager to hear Zappa cover bands and what the organizers call "Zappa-esque rock."

But the nonprofit group Arf Society, which organizes the event, also sells merchandise complete with the unmistakable logo depicting Zappa's unique facial hair, the moustache-soul patch combo. And that, says Gail Zappa, Frank's widow and head of the Zappa Family Trust, violates the Zappa trademark. She is suing the group for €150,000 ($236,000) in damages and an additional €250,000, should the Zappanale continue selling Zappa merchandise.

Her real concern though, she says, is her husband's legacy.

"One of the reasons you file a trademark is to protect the works of a person," Gail Zappa told SPIEGEL ONLINE in a telephone interview. "I felt we were getting into territory where we were putting the audience at risk in terms of who Frank was. You become concerned."

The Zappanale was first held in 1989 prior to the fall of the Berlin Wall. It was, says Arf Society President Thomas Dippel, a small affair made up of "about 80 Zappa freaks" and two cover bands. And it certainly wasn't without risk. Zappa records were banned in communist East Germany and were expensive on the black market. Arf Society treasurer Wolfhard Kutz, who first heard Zappa as a 17-year-old in 1972, found out after the Wall fell that he had been a favorite target for East German secret police snoops. The Stasi even wrote in Kutz's file that he "knows how to influence the youth with Zappa."

Since then, the Zappanale, has grown to its current three-day format with 17 bands playing for Zappa fans who come from around Europe to attend -- and pay €80 ($125) for the pleasure, a price that also comes with a campsite.

Usually, though, Dippel says, the Arf Society makes hardly any money on the festival and any extra goes into booking better bands. Indeed, he says, they are happy if they can break even. Should the court on Wednesday decide in favor of the Zappa Family Trust, the Zappanale will appeal, he says. But he also fears that losing in the courts could mean the end of the festival.

"The reactions we have received are almost all completely furious with Gail Zappa," Dippel told SPIEGEL ONLINE. "I have the impression that she wants to prevent Zappa music from being played, except by her son (Dweezil). Zappa his whole life long was for artistic freedom. There is a story, though it may not be true, that Zappa on his deathbed said: 'Play my music, whether you're a musician or not, play my music.'"

Indeed, the disagreement between Gail Zappa and Dippel's group quickly transcends trademark and boils down to the legacy of Zappa, who died in 1993 at the age of 52. What would Frank Zappa do?

Dippel, who helps organize the festival in his free time, is convinced that Zappa would be horrified by his wife's aggressive pursuit of Zappa trademark violations. The Zappanale has not been her only recent target. A number of blogs have likewise been served papers for posting Zappa music or videos and some YouTube videos have also been taken down. Many Zappa blogs are full of strident critique of the Zappa Family Trust.

"She is harming Frank Zappa's legacy much more than she is helping it," Dippel says. "I have talked to a number of people who are planning on boycotting all Zappa products in the future."

Despite all his blasting of the government and of efforts at what he called "social engineering," Zappa was also a great believer in American-style capitalism -- and in strictly obeying copyright laws. He even made sure to pay royalties for the use of John Cage's completely soundless composition "4'33"." Even if Zappa referred to the Zappanale as "great" and "amazing" in a 1991 interview with the now defunct fanzine Society Pages, Gail Zappa is certain he would not disapprove of her copyright and trademark crusade now.

"Would the Zappanale folks be doing this if Frank was still alive? No fucking way," she says. "We licensed performances when he was still alive. But you at least check to make sure they do a good job. I'm sure he would probably do what I am doing."

Dippel says that the Zappanale has long tried to get the kind of official rubber stamp that Gail Zappa insists is available. He claims that letters have been sent and that Zappanale people even met with Gail in Amsterdam at the beginning of the 1990s. He also says that he invited the Zappa family -- including Gail, Dweezil and Moon -- to an unveiling of a Zappa statue that now graces Bad Doberan.

Gail -- who refers to the statue as an "impish creature" that "doesn't look like Frank Zappa unless you argue that putting a moustache on any face looks like Frank Zappa" -- says that very little communication has taken place with the Zappanale. "I've long known that there was this quote-unquote festival slash event slash what the fuck," she says.

But she also claims that the organizers have not responded to requests by her lawyers to detail exactly what kind of products they are selling and how great the turnover is. She insists, however, that her primary concern is the music. "My obligation, which I cannot be relieved of by anyone other than Frank Zappa, is to protect the intent and integrity of his music," she says. "That's my job. I have no choice."

Dippel is unconvinced. "Why is she really doing this," he wonders?