Brigitte Böhnhardt, 65, bore three sons and lost two of them. Peter, the middle child, died in 1988 at the age of 17 for unaccountable reasons. It is alleged he fell after heavy drinking at a party. His mother doesn't know to this day whether he was pushed or fell of his own accord. However it happened, she found him dead on her door step. It's the kind of event which is unlikely to increase a person's confidence in the investigative authorities.

The youngest of her three sons, Uwe, born on Oct. 1 1977, died on Nov. 4, 2011 in a mobile home in Eisenach, Germany. He committed suicide with his friend Uwe Mundlos after a bank robbery in order to avoid capture by police, who were hot on their heels. Authorities now accuse the two men of 10 murders of men of predominantly Turkish origin, 14 armed robberies of banks and the creation of the National Socialist Underground terrorist cell together with Beate Zschäpe, the sole surviving member who is now standing trial in Munich on related charges.

Brigitte Böhnhardt is a woman who has experienced the less happy side of life. Indeed, she grieves for her son just as the families of the NSU's victims do for their lost ones. Some might ever argue that it is worse for her given that when children die having committed murders, it also always sends a message for the parents.

Why Did Our Child Do That?

Böhnhardt's dead son was presumably a murderer and a terrorist whose criminal career began early and was likely unstoppable in spite of his parents' best efforts. Any mother or father in that position would be stricken by guilt and left asking themselves a number of questions. Why did our children end up like that? We loved him, protected and encouraged him as best we could, didn't we? What did we do wrong? Why us? Why our Uwe?

This Tuesday and Wednesday, Böhnhardt testified in the NSU trial in Munich as a witness. The court, led by Judge Manfred Götzl, had reserved two days for her testimony and listened to her extensively with stony-faced expressions. In truth her comments were pretty outrageous and not the kind of thing normally heard in a democratic court, even if one makes allowances for a grieving mother. Böhnhardt made little effort to play down the conspiracy theories which she outlined to the court, ones that right-wing extremists could easily identify with. For an appearance in a legitimate democratic court, she laid it on pretty thick.

She spoke of "her" Uwe, the baby of the family, a sometimes spoiled child who on top of everything else was unlucky enough to have hit puberty during the instable reunification period in his home city of Jena in the former East Germany. At school Uwe was a troubled pupil, despite his mother being a teacher, who began "messing around" as his mother understates it and who resisted everyone and everything. He preferred being with the big boys than with the small in order to be one of the "strong" ones. He was a boy who was sent ahead by the older guys when it came to committing typically juvenile idiocies and crimes because he was under the age of criminal responsibility. All in all, he seemed to be a difficult child.

It can't have been easy for Uwe Böhnhardt's parents to have gone through being rejected by other schools who refused to take their son on account of his misdeeds, his intransigence and unwillingness to stop playing truant. "It was a bad time for us," his mother told the court.

His mother sees others as largely to blame for the situation: Upheaval resulting from reunification, school reform programs, teachers, social workers, the boss in charge of his traineeship. She was once asked by a juvenile court judge why she didn't just throw her son out? What is the right way to deal with such situations? Strictness or help to the bitter end?

"We always let our son know that we loved him and that he remained our son whatever happened, and that he could come back and that we'd always look after him," she told the court. Things a mother would say. But this mother doesn't seem able to grasp how her son turned out the way he did -- despite or perhaps because of all her care.

Uwe Böhnhardt eventually got an apprenticeship in construction. "That was alright with me," his mother said. "Someone has to build houses for the rich and the beautiful." His parents bought him a car and paid for the expensive driving lessons required to get a license. But then he became unemployed. She described how he found new friends, "nice, polite young people" such as Ralf Wohlleben, who is also being tried as an accessory to murder in the case, Uwe Mundlos and Beate Zschäpe. "All of them unemployed," said Brigitte Böhnhardt.

Ten Years? 'Not Even Pedophiles Get That'

Recalling her son's first stay in an adult remand center while still technically a minor, Böhnhardt said, "a (minor) son in a mens' prison is always going to seem a victim to his mother. I imagined the most awful things." She said it was clear from then on that her son would never again (allow himself) to be imprisoned. She remembers a visit by authorities in 1998 after the three had disappeared and how distraught she was about the possible sentences they discussed. Ten years! "Not even pedophiles who kill children get that!" she resentfully told the court.

Or perhaps five years in case of good behavior or maybe even a suspended sentence, she claimed they told her. They also mentioned that the sentence might be reduced. It seemed like a "closing down sale" to her. "Perhaps that's the public prosecutors' trick -- say really bad things and then take some of it back, just to scare a mother!" She also questioned why they wanted to put her son away for 10 years? Mundlos and Zschäpe hadn't done anything! And her son hadn't done anything either except disappear! If Brigitte Böhnhart believes that it is the public prosecutor who decides on sentencing, one can only guess what else the teacher has been telling her pupils.

Presiding Judge Götzl then incidentally referred to explosives and pipe bombs found in Beate Zschäpe's garage. "Oh, I'd forgotten that," Böhnhardt told the court, accompanied by a throw away hand gesture. She only knew about that from the media, and Uwe had told her not to believe everything written in the press, she said.

She also recalled her telephone contact with her son after he had gone into hiding and their first meeting in a parking lot, for which she and her husband had specially rented a car in order to evade police surveillance. She further recalled notes left in her mailbox with which the trio arranged further metings and the money she gave them to allow Uwe and his friends to eat. "All we wanted was for him not to steal again," she told the court.

"How did they collect the money?" the judge asked. "Someone came, said the password which only Uwe and I knew and received the money, 500 deutsche marks back then, about once every three months," she explained. When asked what the password was, she angrily retorted, "I won't say! That'll be all over the Internet, that's awful. I don't want that!" She gave the impression there couldn't be anything worse than the revelation of details of her relationship to her son. For the record, "Little Rib" was the password, the nickname she gave him as a child after he'd broken some ribs.

Of course mothers are willing to do a lot to protect their children from prosecution. But Brigitte Böhnhardt's testimony was illogical, not always credible and at times downright bizarre.

Few Words for the Victims

She told the story of a police investigator who allegedly threatened to shoot her son and his co-fugitives, "if one of them should so much as twitch during their arrest." But she also testified that she sought to persuade the trio over and over again to turn themselves in. If the authorities had only stuck to their offer, she said reproachfully, the three would have gone to the police. The offer had been to reduce Uwe's potential sentence. Had they done so, "these five young people wouldn't be sitting here in the dock," she said, turning to the defendants. It was clear from that statement that her true sympathy lay with the five accused.

On Tuesday, Böhnhardt didn't mention a single word about the victims. She didn't express any pity for the people shot in the head with a Ceska 83 pistol who were left to bleed to death in agony or their surviving relatives.

Instead, she spoke of her suspicion of the police, whom she alleged planted things at the places where they would later confiscate them, officers who tricked people. She said her son had always told her, "Mom, it's all made up anyway!"

As a woman from eastern Germany who had lived through the times of the German Democratic Republic, she said she had been happy the police didn't tell her that her son had been "shot while trying to flee," the term used for people killed while trying to escape East Germany.

She also described to the court her worries about her son's welfare. "Where were they? What money were they living on? Where were they living?" She said the standard reply had been that the trio had friends and were doing fine. She thought, hoped and convinced herself that her son and his two accomplices were living abroad.

"Mr. Mundlos is convinced that his son only became involved in all this because of ours," she continued. For Böhnhardt, Mundlos is just another grieving father. "But all three were adults," she said feistily. "Any one of them could have left! All of them were equally in charge!"

On Wednesday, Brigitte Böhnhardt did express gratitude to Zschäpe, whom she thanked for calling her after the death of her son. She described Zschäpe's voice as having been "very thin and shaky". "It must have been very hard for her to inform the parents," she told the court. She then turned to Zschäpe and said, " Thank you for doing it anyway."

And it was only after she was asked that she expressed any compassion for the families of the victims on Wednesday. "I not only feel sorry for them, I feel with them," she told the court. Böhnhardt also said she understood what it meant to live for years in uncertainty. "I am thankful that they haven't taken revenge on us. I have a lot of respect for that." 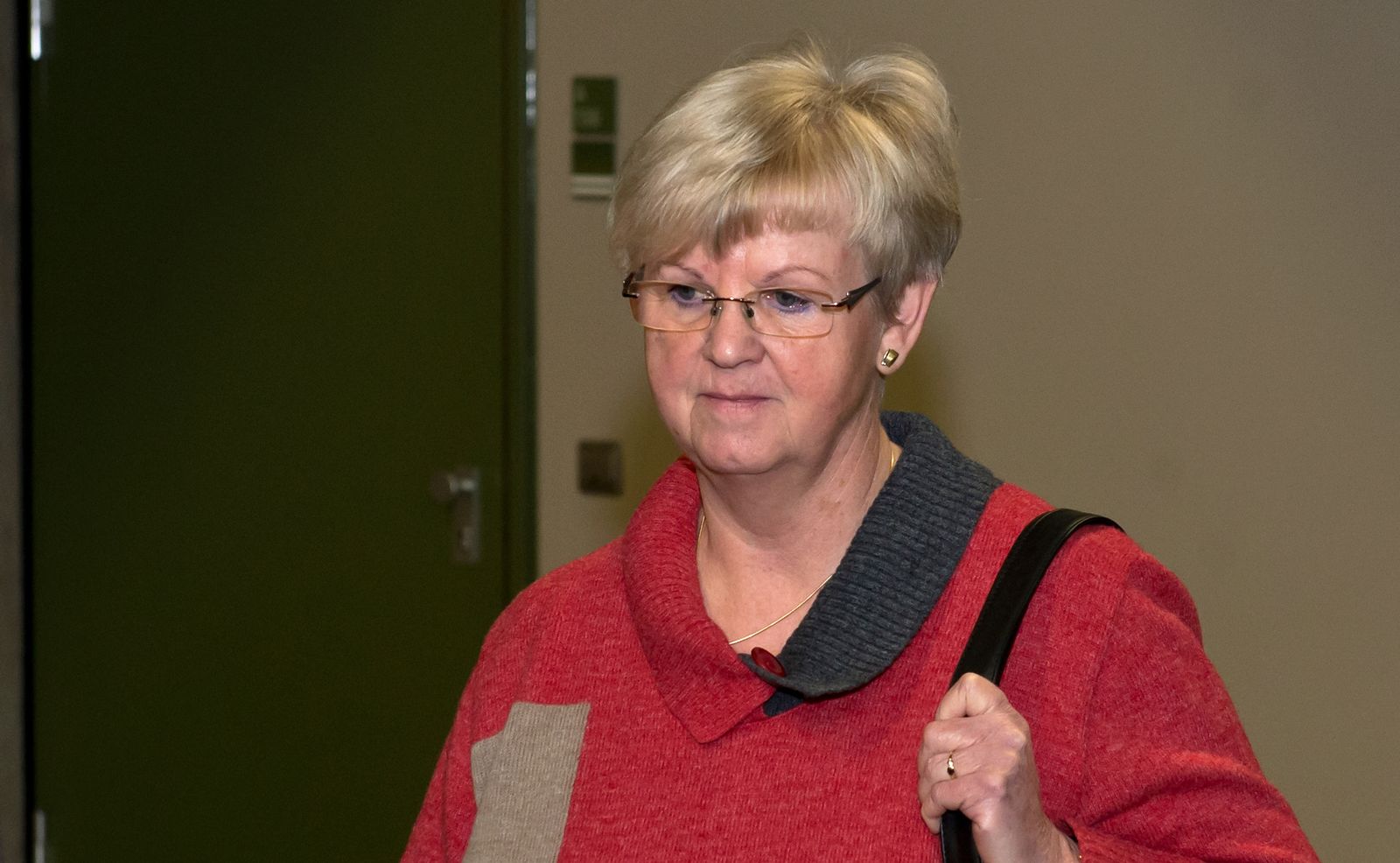 Brigitte Böhnhardt, mother of NSU-member Uwe Böhnhardt, walks into to the courtroom on Tuesday in Munich.