Peter Böhnhardt was just 17 years old when his lifeless body was deposited outside the door of his parents' house in the eastern German city of Jena. The circumstances surrounding his death have never been completely solved. Jürgen and Brigette Böhnhardt suspect that their son fell while climbing on castle ruins nearby and that his friends, afraid of any consequences, dropped his body off on the asphalt during the night.

That happened in 1988. On Thursday, a quarter-century later, Brigitte Böhnhardt sat in Room 101 of the parliamentary building of the eastern state of Thuringia, in the capital city of Erfurt. A tall woman, she speaks in a soft but surprisingly high-pitched voice. The 65-year-old teacher is the first relative of a suspected member of the National Socialist Underground (NSU), the neo-Nazi terror cell that killed 10 people from 2000 to 2007, to be questioned in public.

She and her husband lost another son as well. Ten years after the death of his older brother, Uwe Böhnhardt went underground. On Nov. 5, 2011 -- 13 years, nine months and 10 days after Uwe descended into a life of crime -- his parents received the second report of a death: Beate Zschäpe telephoned in the early morning and told Brigitte that her younger son had also died.

'It Couldn't Have Happened That Way"

That wasn't the only bad news. Jürgen and Brigitte would then learn from the police that their son was killed with a shot to the head from his accomplice and friend Uwe Mundlos. The two men are accused of fatally shooting 10 people -- including eight men with Turkish roots, another man with Greek roots and a female police officer -- during a killing spree across Germany between 2000 and 2007, in addition to robbing banks and carrying out bombing attacks.

The NSU parliamentary investigative committee is currently examining the events leading up to the trio going underground on Jan. 26, 1998. The trigger was a police raid on three garages in Jena, one of which belonged to Jürgen and Brigitte Böhnhardt. "It couldn't have happened the way the police describe it," Brigitte says.

In front of the investigative committee on Thursday, she described the raid as follows: At 7 a.m., the doorbell rang and there was knocking at the apartment's front door. "This is the police! Open up!" It wasn't the first time police had sought out the family's home; Uwe Böhnhardt was deeply involved in the neo-Nazi scene, and there had been previous raids. Brigitte Böhnhardt woke up her son. The police officers presented their search warrant, looked around Uwe's room and demanded access to the garage the family had rented across the street.

Brigitte Böhnhardt protested. It was her car parked in the garage, not Uwe's. Ultimately, however, she gave up and sent her son down with an officer at 7:30. "Make sure the police don't find anything that wasn't there before," she told him. She is very distrustful of the police.

When Brigitte Böhnhardt returned home that afternoon, she was unaware that her son's life in the underground had already begun. The keys to both garages as well as her car key had been returned to their places. But according to what Uwe told his mother weeks later, at first by phone and then at a secret meeting, he had locked everything up after the raid and then accompanied the officers to an additional garage in another part of town. There, he told his mother, a policeman growled at him, "It's your turn now. The arrest warrant is on its way."

Uwe Böhnhardt reacted by climbing into his red Hyundai and driving off. He then picked up Uwe Mundlos and Beate Zschäpe, the other two members of the NSU, and they disappeared.

The police found two pipe bombs, parts needed to construct explosives and 1.4 kilograms (3 lbs.) of TNT. There are conflicting statements from officers who were at the scene regarding whether the explosives were discovered before or after Böhnhardt drove away.

Police claim that Brigitte Böhnhardt's story is inaccurate and that nobody told Uwe he was about to be arrested. They say that Uwe's Hyundai was in his parents' garage when he opened the door. After the car was searched, they say, Uwe rolled it out of the garage, asked the officers present if he was still needed and then drove off -- straight into hiding.

In her testimony before the parliamentary committee on Thursday, Brigitte Böhnhardt cast doubt on many aspects of the police version of the story. She says that her family's relationship to the Jena police at the time was "very tense," and she claims that officers had planted alleged "finds" on her son during previous raids, including three knives and a crossbow. She also says that police entered their apartment when nobody was at home. Indeed, she remains so mistrustful that she even doubts that the police found explosives during the January 1998 search. "Uwe Mundlos' father also thinks it was a set-up," she said on Thursday.

Brigitte Böhnhardt said that she first realized that her son planned to live his life underground when his car key and registration turned up one day in the mailbox. "I called Uwe Mundlos' mother, and she was just as surprised as I was," she said. She also spoke with Ralf Wohlleben -- who is currently a defendant along with Zschäpe at the NSU trial in Munich -- and the well-known neo-Nazi André K., but neither knew where her son was.

Investigators looking into the whereabouts of the trio questioned her, Brigitte Böhnhardt said, and asked her to persuade them to turn themselves in. One, she says, threatened her by saying: "If we find them, Ms. Böhnhardt, our people have learned that we are quicker (on the draw)." She says she was sure that the police wanted to shoot them.

She and her husband, she made clear, didn't trust local or state police at all. She says that, after receiving a note in her mailbox, she drove to a secret meeting with the trio in a rental car. She said she never would have considered taking a police officer with her. "We wanted the kids to turn themselves in," she said, "but we didn't want to betray them."

Jürgen and Brigitte Böhnhardt once said during testimony that the unsolved death of their second son, Peter, in 1988 was also a significant blow for their third son Uwe and may have played a role in his radicalization. On Thursday, she said in a strong voice: "In addition to the criminal, I still see my son, as well. And everyone will also grant me that." 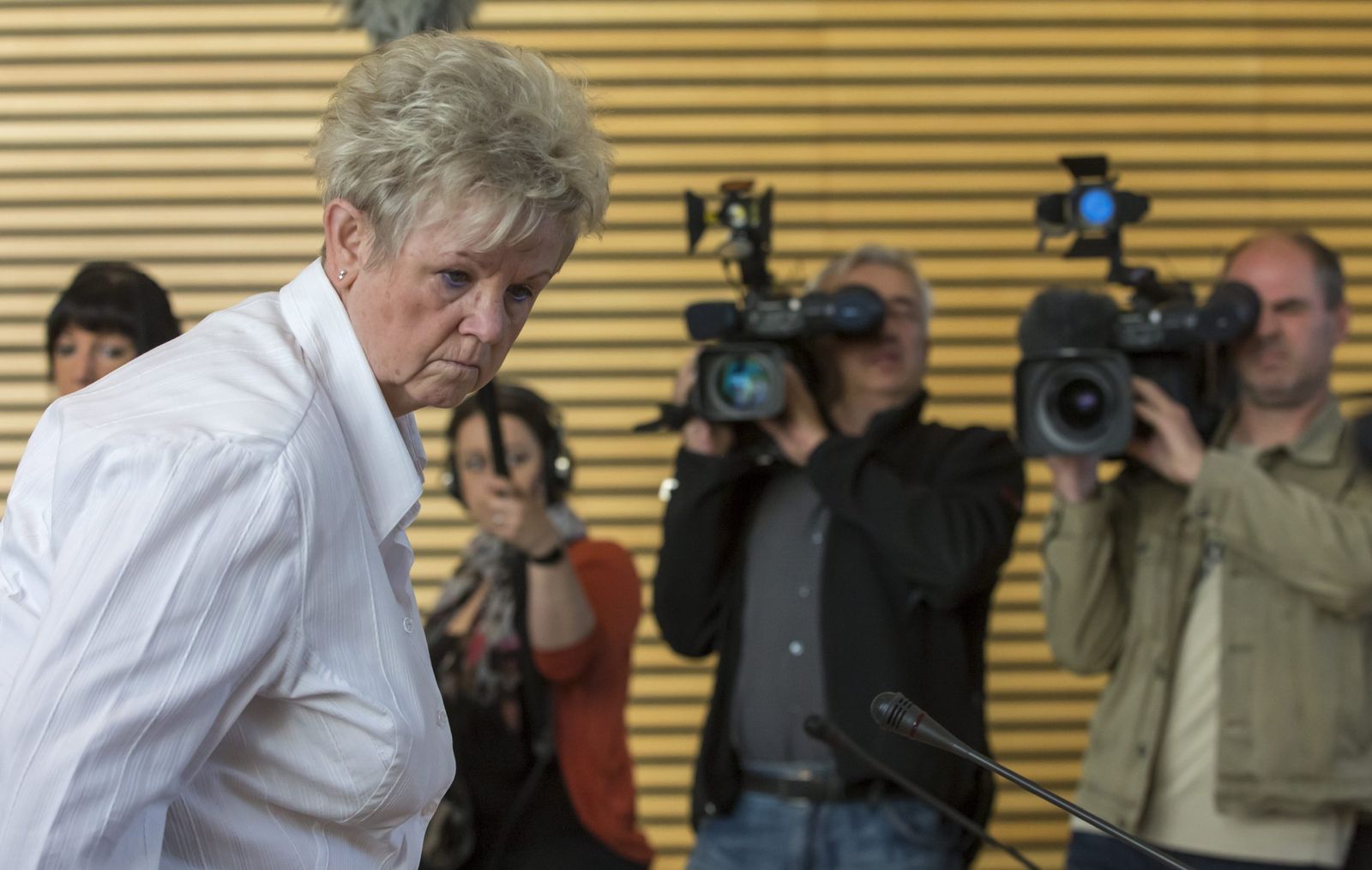