Police at the Munich Oktoberfest say crimes such as rape and theft are down this year but attacks with glass beer steins are on the rise.

The heavy glasses that hold one liter of beer are a symbol of the annual folk festival. But they can also be deadly weapons. And at this year's fest they have already sent some to the hospital with serious injuries, such as concussions, and bleeding in the brain.

"At Oktoberfest it's happening unfortunately more and more," physicist Erich Schuller, of the Institute for Forensic Medicine at Munich University told SPIEGEL this week. "A stein like that weighs 1.3 kg (2.9 lbs) and thanks to the handle, it's easy to grip, and that makes it an effective striking tool."

Six Months to Life in Prison

So far this year there have been 32 injuries resulting from beer stein assaults, said Munich police spokeswoman Claudia Haas, up from 19 at the same time during last year's festival. She said she expects the stiff sentences the perpetrators face will serve as a deterrent in future.

Those penalties could range from six months jail time for assault to a lifelong prison sentence for someone who commits premeditated murder, said Thomas Steinkraus-Koch, spokesman for the Munich district attorney's office. The penalties also depend on whether the perpetrator is under age or not and on the severity of the injuries to the victim.

The large turnout at this year's festival, brought on by warm weather and the commemoration of its 200th anniversary, could be responsible for the increase in beer stein attacks, Steinkraus-Koch said. So far, there have been 3.5 million visitors to Oktoberfest, which could mean a record year. Munich itself only has a population of 1.3 million.

With that many people under the influence of alcohol, "things can naturally increase," said Steinkraus-Koch.

A Hit So Hard The Stein Broke

Still, the number of other crimes at Oktoberfest has decreased. The number of rapes and attempted rapes is down from five at this point last year, to three, and the figures for theft are down from 365 last year to 260 incidents, Haas said. So far, one person has died at Oktoberfest this year. An elderly man who drank too much fell down and hit his head, and died from the injuries, according to the police.

One of the most serious cases this year of an attack with a beer stein happened on Sept. 18, when a 20-year-old resident of Munich got into a fight in a beer tent with a 29-year-old Canadian tourist. The German then hit the Canadian with his beer stein on his head. The beer stein broke, and its shards injured two of the Canadian's companions. The Canadian survived with a concussion, and the German remains in detention awaiting trial.

On the same day, two more Oktoberfest partygoers were brought to the hospital after being hit in the head with beer steins in beer tent altercations. One of them, an Australian tourist, had bleeding in the brain after he was hit by a Frenchman.

An Accidental Beer Stein to The Face

Some of the beer stein injuries are purely accidental, such as the case of a 26-year-old Serb who threw his beer stein behind him and hit a 36-year-old German in the head, causing a laceration and trip to the hospital.

And then there have been situations where groups have gotten into fights and some have used the beer steins as weapons. On Sept. 25, at 2 p.m., a group of French festival-goers and a group of Italians got into a brawl in which one Frenchman threw his stein into the group of Italians. No one was hurt by that mug, but the Italians then took their steins and charged at the French. One Frenchman was hit directly in the head and was brought to a Munich hospital with a fractured skull. All of the participants were arrested on the spot, according to the Munich police.

'Every Hit Is Potentially Fatal'

Erich Schuller, of the Ludwig-Maximilian University in Munich, said his lab has recently carried out tests in which they used brand new steins and hit them against human skulls. "The bones often will break, but we haven't been able to break the steins," Schuller told SPIEGEL. "A hard hit with a stein packs more than 8,500 newtons of power -- the human head in the parietal region breaks with about 4,000 newtons."

In the case of the 29-year-old Canadian it happened the other way. He survived the attack with a concussion, and the stein broke.

"Surprisingly there have been eight cases in the past few years at Oktoberfest when the stein broke," Schuller said. "It's likely that these steins weren't new and therefore were considerably less solid. Still, a perpetrator can't know that before, and every hit is potentially fatal. In our institute, we have just performed an autopsy on someone who got a beer stein to the head." 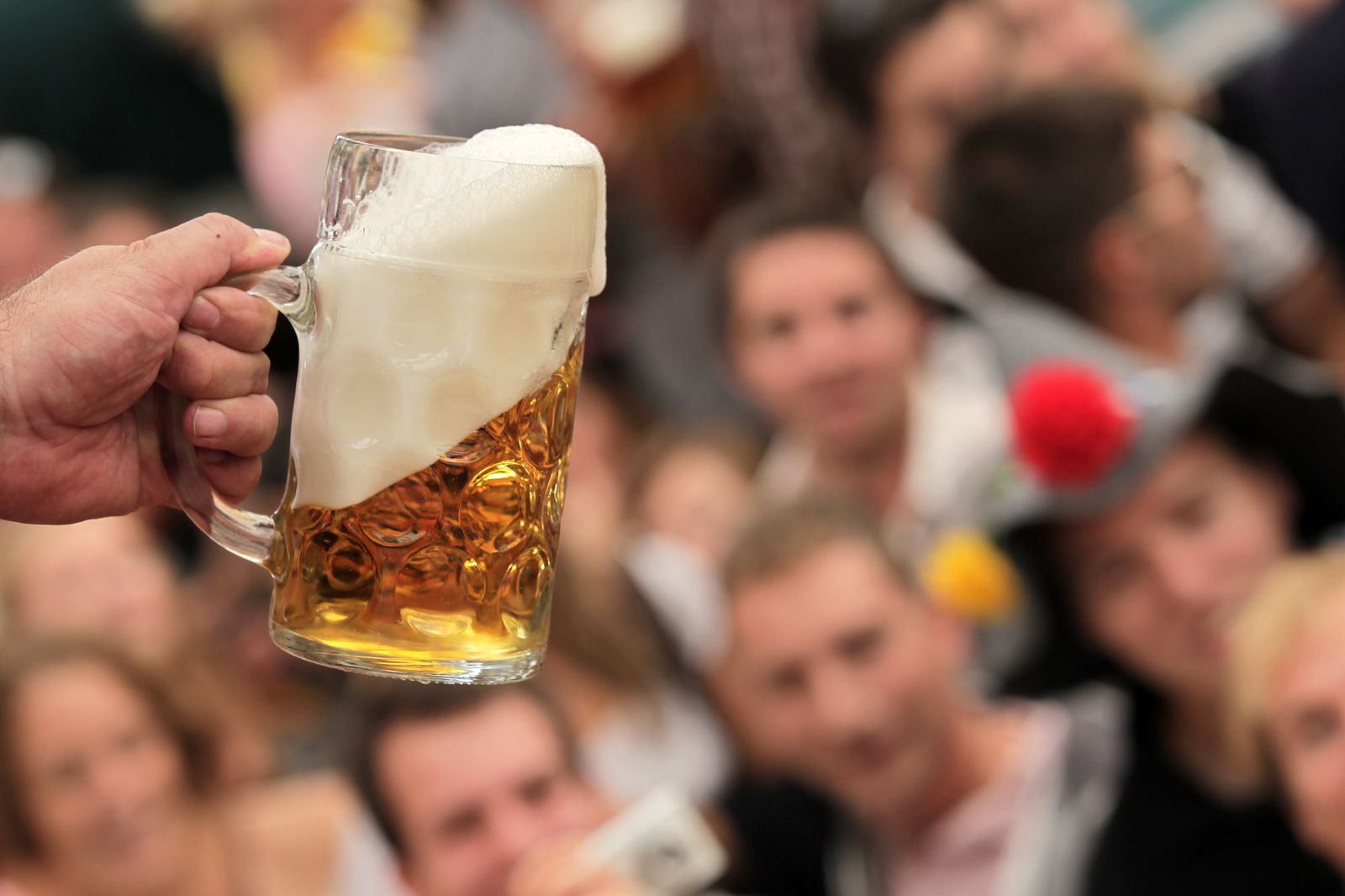 A one-liter beer stein, like those used in attacks at the Oktoberfest. If used with enough force it could crack a person's skull.