The priest H. had put a great deal of effort into his letter of application. On a summer afternoon in 1980, he copied photos and articles from local newspapers and church newsletters and provided a comprehensive description of his dedicated work with the young people of Munich's parish of St. Johannes Evangelist, as a way of recommending himself for higher office.

He submitted his request directly to the head of the archdiocese at the time. He wrote "For the personal attention of His Eminence Cardinal Joseph Ratzinger" on the envelope and delivered the letter directly to the addressee on the morning of July 31, 1980, as members of the Catholic parish recall today. H. told colleagues in the rectory that, at the age of 32, he felt that he was getting a bit old to be an assistant priest; he now wanted to have his own parish.

It appears that "His Eminence" dealt with the letter. At any rate, the disappointed priest later told members of his parish that Cardinal Ratzinger felt that H. should remain in his position at St. Johannes Evangelist for the time being, since the old priest was often ill and he was so popular among the young people in the neighborhood.

All of this occurred 30 years ago. Today, previously unknown documents, as well as witnesses who confirm the delivery of the letter, are shedding new light on the case of the abusive cleric H., which first became public last March -- and also on the role of the current pope.

According to the allegations, during his tenure in Munich, Ratzinger did not give sufficient attention to the type of duties that were assigned to the alleged pedophile H. Despite massive allegations of abuse levied against the priest, the archdiocese led by Ratzinger allowed H. to continue to be involved in church work with children and young people.

For months now, very little progress has been made in clearing up this case. This is partly because the current archbishop of Munich, Reinhard Marx, who the pope recently promoted to cardinal, swiftly decided that the matter was settled.

H. was transferred to Munich in January 1980 after he had apparently sexually abused a number of boys in his home diocese of Essen. Under Ratzinger's leadership, the Munich archdiocese expressly approved H.'s transfer on January 15, 1980. It was decided that the cleric was to undergo therapy.

Recently discovered documents now show that there could have been no doubt in Munich about the priest's previous history. The head of personnel in Essen had informed Ratzinger's head of personnel by phone and in writing that, in regard to H., "there is a risk which has prompted us to immediately remove him from the parish." Furthermore, he said that "an official complaint has been lodged by members of the parish."

But his victims are still waiting in vain for a genuine clarification of the matter. Wilfried Fesselmann, for instance, who says that he was abused by H. in 1979, wrote to Pope Benedict XVI last May. The Congregation for the Doctrine of the Faith replied: "Your request is being processed." Since then, he has heard nothing from them. The archdiocese of Munich is also reticent to comment on the case, despite the fact that Marx has pledged: "We want to do everything to clear this up -- we will not look away, play it down or point the finger at others."

"The fact that Archbishop Marx has now been made a cardinal," says Fesselmann, "seems like a reward for having helped the pope." Indeed, Marx, 57, is currently the youngest cardinal in Germany.

In spring 2010, the Munich affair caused an enormous stir. It initially looked as if the abuse scandal would engulf Ratzinger personally. After all, the pedophile who was accepted by him into the archdiocese in Munich was able to continue working there as a pastor for three decades and find new victims -- despite the fact that he was charged a fine and given a suspended sentence in 1986 for abusing schoolchildren.

Marx and his press office immediately went into damage-control mode: They said that Cardinal Ratzinger had merely taken part in the decision to accept H. in Munich for the purpose of therapy, and otherwise had no further knowledge of his subsequent work. According to the archdiocese, the former Munich Vicar-General Gerhard Gruber acted alone and solely assumes full responsibility.

But how likely is it that Ratzinger would have been left in the dark about H.'s case by his closest associates -- the vicar-general and the head of personnel?

Only two weeks after Ratzinger approved H.'s acceptance for therapy in Munich, the priest was again assigned to pastoral duties. H. wrote in a résumé, which is currently in the archdiocese's files, that he had already been called upon to "help with pastoral care on Feb. 1, 1980" in the parish of St. Johannes Evangelist.

In order to convince Ratzinger that he should be given his own parish, the priest attached to his application a copy of a church newsletter from his current parish. This included an article in which he proudly describes his accomplishments working with children and young people. For instance, on April 4, 1980 -- in other words, less than three months after his transfer for disciplinary reasons -- he wrote about a pilgrimage that he had organized with "20 to 25 girls and boys."

In June, he wrote that "150 altar boys from the parishes of our deanery" held their main Munich gathering in his parish. In his article, H. delightedly praised the youngsters' "dexterity," "imagination" and "athletic ability" during sporting events in the "Altar Boys' Cup."

In a later issue of the church newsletter, a story on the priest informed readers that his "intensive spiritual counseling of children" had been instrumental in helping the church "triple the number of altar servers within two years." The article also mentioned that, during religious instruction, he had helped "young people in particular" gain "a new appreciation of the joyous message of the Church" and had "enriched the tradition of children's religious services."

Is this what therapy for a pedophile looked like in the archdiocese of Munich in 1980, under the ultimate responsibility of Ratzinger? This is a question that is now being asked by more than just the victims.

Last week, Marx had his press office release a statement saying there have been no new findings in the Church investigation of H. According to the press release, Ratzinger knew nothing: "We have also found no letter from H. to Ratzinger in the files."

Marx and his team find further inquiries from the outside to not be particularly helpful. They still stand by the declaration made by the loyal vicar-general.

For them, the H. case is merely one of many anyway. "We are currently having an external law firm examine 8,000 additional personnel files," said a spokesman. 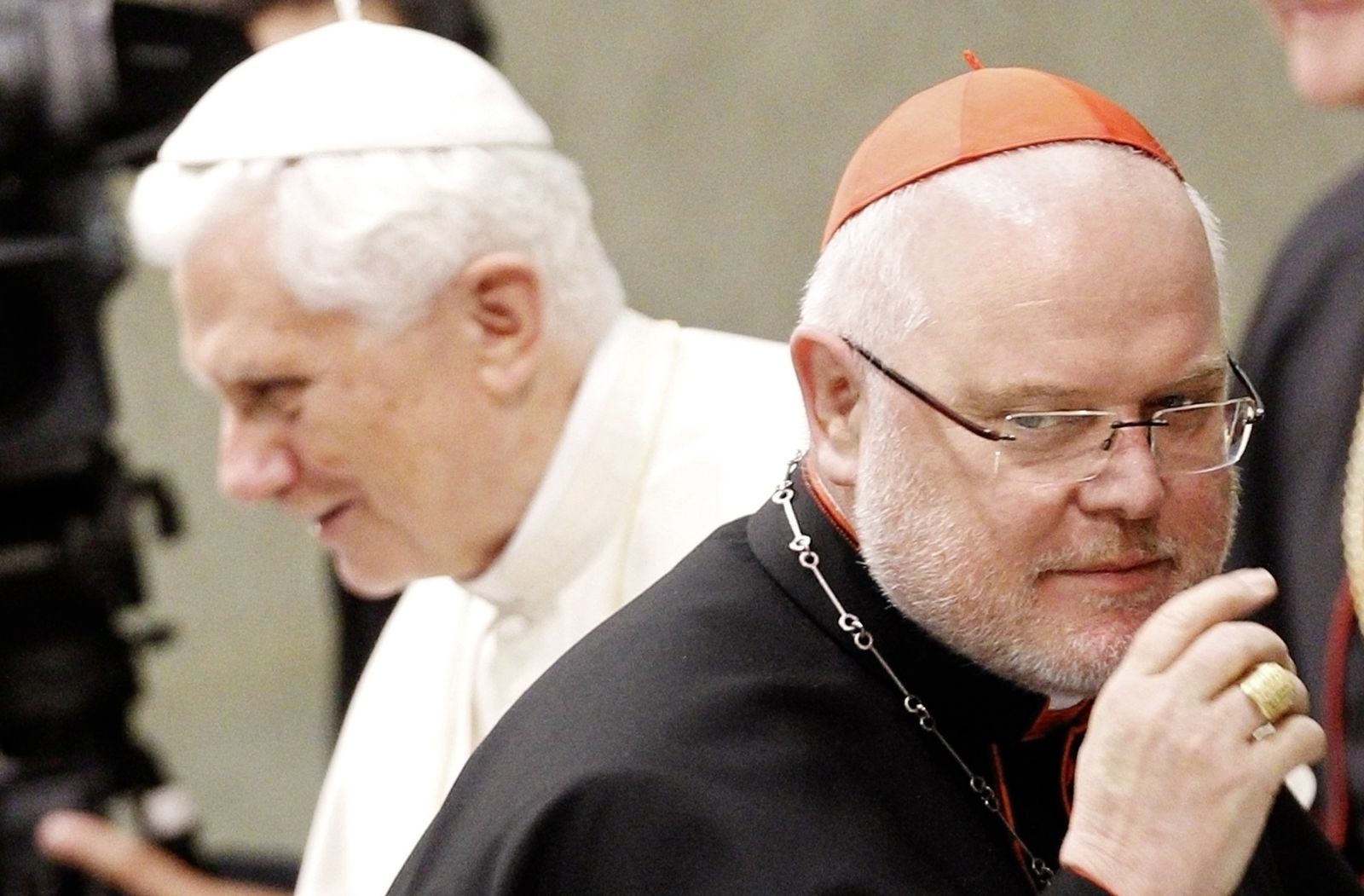 Pope Benedict XVI promoted Reinhard Marx of Germany (right) to cardinal earlier in November. Marx has promised to "clear up" an abuse case in his archdiocese.