Every year, Ditib, the Turkish mosque association, organizes a competition for Muslim boys from all over Germany in which they compete in reciting the Koran and the adhan, the Islamic calls to prayers.

Mastering the adhan is an art. The crier is called a muezzin, and it’s not a recommended pursuit for people with a poor musical sense. This is partly for the benefit of people living near the mosque. A bad adhan is "an agony” and an imposition for the public, one Istanbul author once wrote in a column. That’s why good training is imperative for any burgeoning muezzin.

The musical talent of muezzins has never really been a real issue in Germany. You don’t hear the adhan in most German cities, but even though the call to prayer is only permitted in a small number of communities, the number is growing. A poll conducted by DER SPIEGEL found that eight of the 100 most populous German cities have given their go-ahead for calls to prayer to be practiced in the Muslim religious communities there. Even in some smaller communities like Stolberg and Eschweiler near Aachen, in western Germany, or the city of Neumünster in Schleswig-Holstein, "allahu-akbar” can be heard echoing over the roofs.

When places of worship had to remain closed during the lockdown to halt the spread of the coronavirus, some Muslim communities were granted temporary permits to do the calls to prayer. Ditib estimates that figure to be around 100. In many places, the adhan could be heard at the same time as the church bells in a show of solidarity and comfort.

"In a few communities, the positive experience in the neighborhood has led to an increase in public acceptance for public calls to prayer,” says Zekeriya Altuğ of Ditlib’s national chapter. In those places, the practice has already become a part of everyday life, but debates over whether to allow it are still continuing in other communities.

For cities and towns and the Muslim communities, the muezzin isn’t an easy topic to discuss. It is legally complex. In theory, at least, the adhan should be protected religious freedom, like the ringing of church bells, but this fundamental right that can also be restricted, for noise protection, for example.

In Islamic countries, the muezzin gives the calls to prayers five times a day, including at dawn, which would be unthinkable in German residential areas. The Fatih mosque in Düren, in the western German state of North Rhine-Westphalia, issues the calls to prayers at least three times a day and, as such, is an exception to the tradition. Residents in the city have had years to get used to it. The Islamic community there began fighting for that right way back in the 1980s. Most mosques in Germany that do broadcast the muezzin only do so before prayers on Fridays.

The thorniest question revolves around so-called negative freedom of religion, meaning the right not to be disturbed by any religion. Many people are annoyed enough by the ringing of church bells. But the muezzin’s proclamations of faith go a step further. In Arabic, these include sayings like "God is great,” or "I bear witness that Muhammed is the messenger of Allah” or "There is no God but Allah.”

One married couple living in Oer-Erkenschwick in North Rhine-Westphalia didn't want to accept the calls to prayers in their town on Fridays and took their complaint to a regional administrative court in 2018. The court in Gelsenkirchen ruled that the muezzin could no longer conduct calls to prayer there. The city (and not Ditib, the mosque organization) then appealed the ruling. The city argued that the plaintiffs probably could not even hear the calls to prayer given that they live nearly a kilometer away. The Higher Administrative Court in Münster is still due to decide on the appeal.

Many have come out on social networks in support of increasing the number of places allowing muezzins to recite the calls to prayer. The video of the first calls to prayer to take place at the Merkez Mosque in the city of Duisburg drew close to 300,000 views on YouTube. It also attracted 1,500 comments, with almost all written in Turkish. Many were pleased about the "beautiful adhan” or were thankful that "Germany is so tolerant,” and others suggested "the adhan should echo in all the streets in all countries of the world” or that the Islamophobes in Germany should "finally feel the strength of Allah.”

A Triumph of "Strong Islam”?

Ethnology professor Susanne Schröter of Frankfurt’s Goethe University argues that such comments show that many Muslims viewed the calls to prayer positively as the triumph of a "strong Islam” over a "weak Christianity.” Schröter has conducted extensive research into political Islam and sees a dangerously strong influence on the part of Turkish President Recep Tayyip Erdoğan and his government on Germany’s large Turkish immigrant population.

Members of Erdoğan’s AKP party have repeatedly spoken of a new Ottoman Empire and dreamed of the Islamization of other countries. "The adhan is the verbal declaration that Islam is the only true religion,” Schröter argues. "Many conservative Muslims, particularly officials with Muslim organizations, believe this also needs to be implemented in Germany.” As such, Schröter says she believes it is problematic to give blanket permission for the calls to prayer.

But that position annoys many Muslim organizations in Germany. Zekerya Altuğ of Ditib says the call to prayer is "always discussed in association with fears of alienation.” The association, which operates around 900 mosques, describes itself as "politically neutral,” but it has been criticized repeatedly for its close ties to Erdoğan’s government in Turkey.

A Friday sermon on Ditib’s website states: "In places where the calls to prayer are absent, the souls of Muslims are literally orphaned.” But Altuğ says that the national organization has also recommended its members to approach the issue cautiously. "Good neighborliness is a precious thing to us." Altuğ says it would welcome it if the adhan became a part of "normality.” He says, "This longing for public calls to prayer also has something to do with feeling a sense of home.”

In its "Islamic Charter,” the Central Council of Muslims in Germany’s (ZMD) policy statement on the relationship between Muslims and the state and society, the body says it would welcome "permission for calls to prayer over loudspeakers” in Germany. "However, we prefer to hold back on this demand for the moment and leave it up to local mosques to decide how they want to address it,” says ZMD Chair Aiman Mazyek.

He says the atmosphere is too charged at the moment and that the far right are using the debates over the calls to prayer for propaganda and to further fuel fears of the religion. He adds that too many issues in Islam are exploited by extremists, by the far right and Islamists alike. "It makes you want to pull your hair out,” says Mazyek. He says critics like Susanne Schröter only ever describe the Islamist side. But he says the authority to interpret the calls to prayer should not be ceded to them.

A debate has also erupted over the permission to conduct the calls to prayers in the city of Herford. A few weeks ago, the city gave the local mosque, which is operated by Ditib, permission to do so. Local politicians with the far-right Alternative for Germany (AfD) party protested, arguing that the permit shows "just how far the Islamization of our homeland has already progressed.” Each Friday, a single opponent of the calls to prayer who describes himself as being "neither a left- nor a right-wing extremist” tries to drown out the muezzin. He says that to him, the muezzin’s call is like a "call to the caliphate.” The man has been charged with disturbing the freedom of religion.

The local Westfalen-Blatt newspaper reported that the man once rang a cowbell, which the police confiscated because he was disturbing the peace. Another time, he banged a spoon against a pot. 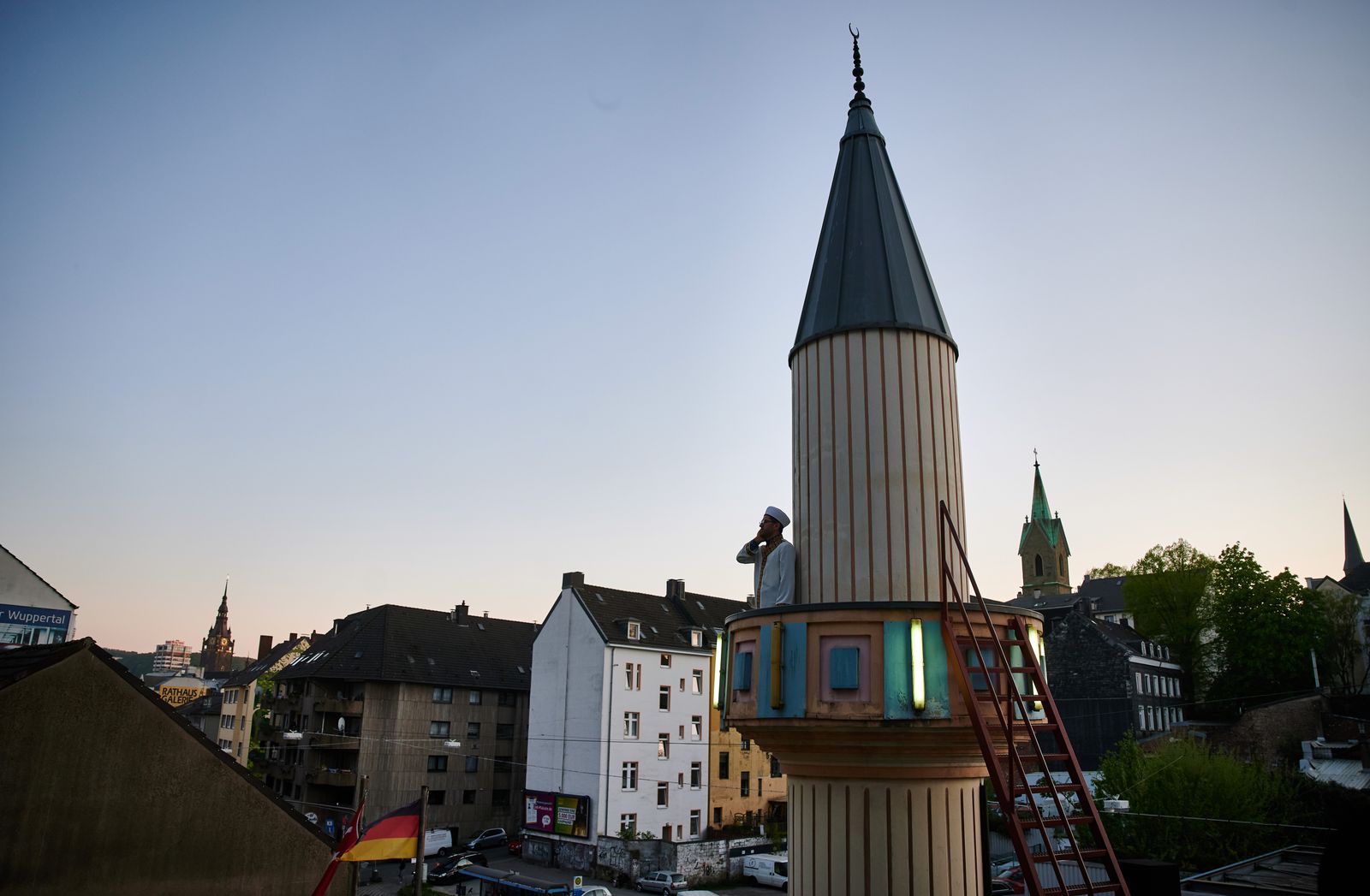 A mosque in Wuppertal: "an increase in public acceptance for public calls to prayer"