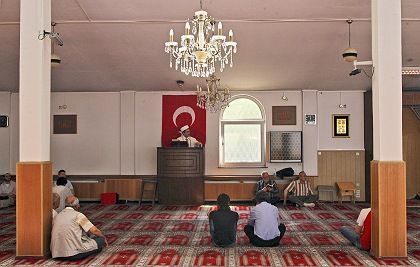 A mosque in Cologne, Germany: A study on imams in the country has found only a fifth have an academic education.

A study on Islamic preachers in Germany has found that most imams are unable to help Muslim immigrants integrate into mainstream German society because they are insufficiently prepared for their stay in Germany.

According to the study "Imams in Germany," up to 20 percent of preachers belong to the more conservative, fundamentalist strand of Islam. The study also discovered that only one fifth of imam's possess academic qualifications.

The research is the work of a Duisburg social scientist, Rauf Ceylan, the son of Turkish immigrants. To conduct the study he attended religious services in mosques and carried out interviews with Muslim preachers.

According to Ceylan, the religious groups running mosques in Germany were mainly interested in their preachers correctly reciting the Koran. "An examination of the content of the holy book," he said was "not the primary goal."

Ceylan also found that many imams were susceptible to "superficial interpretations" of the Koran, because they lacked a proper academic education. It was not uncommon, Ceylan said, for these lay preachers to be drawn from the ranks of extremists.

Among the preachers who do have an academic qualification, the majority are employed in mosques run by a Turkish umbrella organization, DITIB. According to the study, these elite preachers are the only imams who are in a position to help members of their congregations to integrate.

However, these imams only come to Germany for four years. In the abscence of any exchange of knowledge between those preachers who have considerable experience of Germany and the newcomers, new imams have to start from scratch, the study concluded.