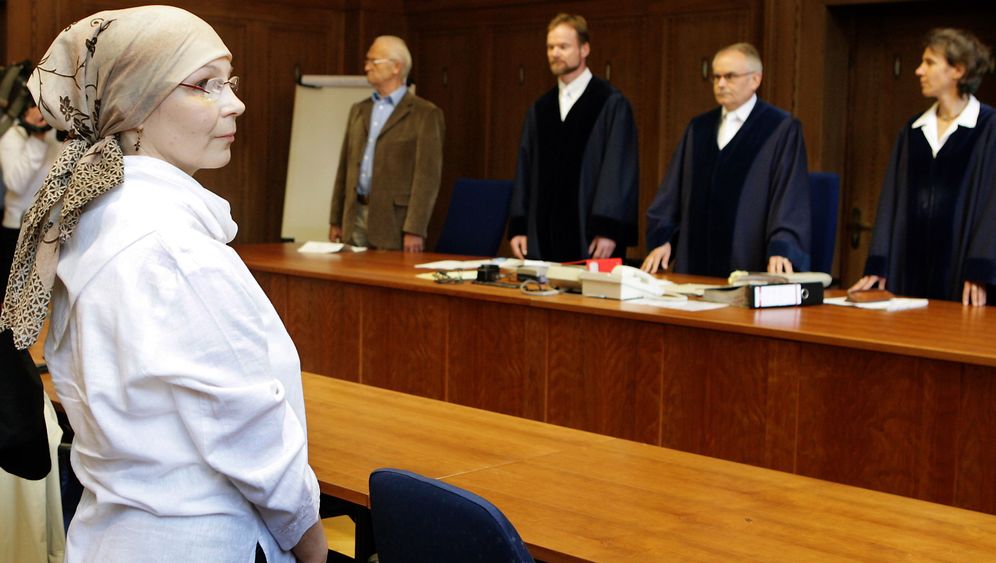 Three times judges have taken issue with the headscarf worn by one female lawyer in Berlin. They declared that by wearing it, the lawyer, as an "officer of the court," was in violation of the ideological and religious neutrality of the justice system. All three times the Muslim lawyer, who has requested to remain anonymous, agreed to compromise.

For two of the trials in question, the lawyer removed her headscarf, under which she wore, in the words of Berlin court spokesman Ulrich Wimmer "a type of cap." In the third case, Wimmer says, the lawyer "wore her headscarf differently, fastening it the back so that it looked more like a peasant's headscarf." The judges were satisfied, finding that with these changes the lawyer's head covering "no longer had a religious appearance."

All three trials in question -- concerning a rear-end collision; a car that collided with a taxi while pulling out of a parking spot; and a crash in an intersection -- were thus able to proceed. In the future, however, the lawyer says she is no longer willing to make such "demeaning compromises." If a judge again takes issue with her headscarf, she plans to file a complaint with Berlin's constitutional court. The bar association has promised her both financial and personnel support.

Can a lawyer wearing a headscarf in court be reconciled with the justice system's constitutional obligation to maintain ideological and religious neutrality? This is a fundamental question that high-level judges in Germany may soon face. Versions of this question have already been raised elsewhere. For example, may an officer of the court wear a yarmulke, as occurred in the local court of the Berlin city district of Lichtenberg? May a court stenographer wear a headscarf? Should the justice system allow a trainee lawyer in a robe and hair covering to represent the public prosecution during a trial?

In each of these cases, the conflict over a piece of cloth boils down to one key question: How secular should our justice system be? Or, in other words, to what degree are religious symbols acceptable in the justice system of a multi-religious society? Should, for example, a crucifix be allowed in the courtroom, as has been the case at the National Socialist Underground (NSU) trial? A member of Turkey's parliament has objected to this, saying the presence of a crucifix is a violation of the principles of a secular, constitutional legal system and amounts to a threat to all non-Christians, especially the Muslim family members of the right-wing extremist group's alleged murder victims.

Among lawyers and experts outside the justice system, there is little support for the compromises the Berlin lawyer has had to make on the matter of her headscarf. Women's rights activist Seyran Ates, who herself works as a lawyer in Berlin, calls these "compromises with a bitter aftertaste" and says the question of headscarves is not an issue on which compromise is possible. Mathias Rohe, a law professor in Erlangen who specializes in the legal status of Islam, believes the legal system "cannot sustain its cumbersome and aimless approach to the headscarf."

This is not a question of a few isolated cases. According to a survey conducted by the Berlin city-state's justice department, female lawyers who wear headscarves now work in almost all branches of Berlin's justice system: seven out of 11 district courts, the regional court, the social court, the administrative court and the higher administrative court. Conflicts, it seems, rarely arise.

Peter Scholz, vice president of the local court in Berlin's Tiergarten district and an expert on Islamic law, believes that "the vast majority of judges and prosecutors are in favor of allowing lawyers to wear headscarves." Scholz himself says he had no objections the time he heard a case in which one of the lawyers wore a headscarf. However, he also recalls a trial in 2011 in which a colleague didn't want a defense lawyer in the courtroom as long as she was wearing a headscarf.

Ates, the lawyer and women's rights advocate, says a ban on headscarves in the courtroom is the practical equivalent to a ban on the legal profession. Still, she believes "the religious neutrality of the justice system" is more important, in part because she finds that female lawyers wearing headscarves present "an image of women and a division of roles that are not what we want." Ralph Ghadban, an Islamic Studies scholar who teaches in Berlin, believes the headscarf as a religious symbol has no place in the courtroom. Allowing the headscarf constitutes "a step-by-step erosion of the state," he says.

Kenan Kolat, chairman of the Turkish Community in Germany, takes a different view. "If an accredited lawyer is banned from wearing a headscarf, that essentially amounts to an occupational ban," he says, calling this "unacceptable." Nurhan Soykan, a lawyer who serves as secretary-general of the Central Council of Muslims in Germany and who herself wears a headscarf, is likewise outraged. She calls the Berlin judges' suggestion that Muslim women should remove their head coverings, or fasten them differently, "dehumanizing and disrespectful."

Marcus Mollnau, president of Berlin's bar association, says a ban on headscarves for female lawyers in the courtroom would be "an encroachment on religious and occupational freedom, for which there is no legal basis." Headscarves do not violate the justice system's mandate of neutrality, he says, because lawyers perform their duties independently and are concerned first and foremost with their clients' interests.

Stefan Finkel, chairman of Berlin's association of judges, puts it even more clearly. "The neutrality obligation doesn't apply to lawyers," he says. "Lawyers can wear turbans, yarmulkes or headscarves."

Standards Vary By State and Court

This, though, can apparently lead to recognition problems. Soykan, the lawyer with the Central Council of Muslims in Germany, says just a few years ago she still came across a number of judges who didn't even realize she was a lawyer because of her hair covering. They "would ask in confusion where the lawyer was," she says. She also had to put up with insulting comments.

Lawyer Kadriye Aydin, on the other hand, regularly appears in court in the federal state of Hesse wearing a headscarf. She says that only early on in her career, in 2005, did a family court judge twice refuse to allow her to file a petition because of her headscarf, on the grounds that "the court dress code allows only robes without a head covering," according to a court transcript of the session. In both cases, Aydin secured the help of colleagues she had approached in the hall of the courthouse, and who filed the petitions on her behalf.

For judges and public prosecutors, on the other hand, the law is clear. State-level regulations, such as Berlin's "ideological symbol law," dictate that these officials may not wear any "visible religious or ideological symbols" while performing their duties. In Hesse, for example, an ordinance states that Muslim women training for legal professions are not allowed to wear a headscarf while performing duties in which they "are, or could be, perceived as a representative of the justice system or of the government."

This means that a woman wearing a headscarf many not preside over civil or administrative court trials or represent the public prosecutor's office in court. The ordinance in Hesse goes so far as to state that such a principled expression of religion can negatively impact these trainees' overall assessment, "since failure to perform up to standard is, as a matter of principle, evaluated as 'unsatisfactory.'"

As for lay judges wearing headscarves, the German justice system has proven at times tolerant and at times strict, varying from state to state and sometimes even from court to court. For example, Berlin's highest appeals court ruled that the position of lay judge is an "honorary post" in which the person in question remains a private individual "despite exercising this office." A lay judge's right to wear a headscarf during a trial is thus protected by the fundamental right to freedom of religion, the court continued, and the only way to change this would be on the basis of a law that does not currently exist.

Dortmund's regional court, on the other hand, approved the disqualification of a lay judge because of her headscarf.

It's no wonder that the justice system's reaction to the question of headscarves comes across as helpless and disoriented. The system lacks a clear compass as to how to best preserve the state's obligation to maintain neutrality, given Germany's increasing cultural, ethnic and religious diversity.

The German Constitutional Court outlined two possible approaches in a 2003 ruling on a headscarf ban for teachers. The first path would be to more strictly enforce "the government's obligation to maintain ideological and religious neutrality," in part to avoid conflicts between those of different religions, ideologies and ethnic groups -- for example, by preventing the possibility of a Jewish defendant in a yarmulke facing a Muslim lay judge in a headscarf.

The second route would be to go in the opposite direction, by taking increasing religious diversity as an opportunity to "practice tolerance" and thus to "contribute to integration."

In other countries, opinions on the matter diverge widely. In secular France, a lawyer wearing a headscarf in court would be inconceivable. In Spain, well-known judge Javier Gómez Bermúdez barred a lawyer with a headscarf from a trial. In liberal Britain, on the other hand, lawyers have had the right to wear headscarves in court since 2006. The same became true in Turkey earlier this year.

Many in Germany wish for such clear rules here, as well. Islamic law specialist Rohe points out that an unacceptable "legal uncertainty" has arisen in which "neither judges nor lawyers know where things stand." This uncertainty must be fixed, Rohe says, whether by a court ruling or by lawmakers. Until this happens, lawyers who wear headscarves cannot know from one appointment to the next what to expect in court.