German Islamophobes hold that their more liberal opponents are do-gooder Islamophiles and cultural relativists. German critics of Islamophobia claim their more conservative opponents are scare-mongers and slanderers. What both groups have in common is an obsession with Islam that doesn't do Muslims, Christians or secularists any good.

The way the politically motivated murders of 77 Norwegian children, adolescents and adults by a right-wing extremist were interpreted by the media as an attack on Islam was downright eerie. There were hardly any Muslims among the victims, nor was a mosque in Oslo blown up. It was not the beginning of a crusade against Islam. The victims were overwhelmingly young social democrats, who, if they could be assigned to a religious category at all, were mainly members of the Lutheran state church.

The killer, Anders Breivik, believes that the "Islamization" of Europe is a threat. But what he finds even more threatening is the "cultural Marxism" practiced by his fellow Norwegians. For him, their liberalism is a sign of cowardice and weakness. The term "cultural Marxism" is a reference to "cultural Bolshevism," a concept from the 1920s, when lamentations about a general cultural decline were part of the standard repertoire of conservative political parties. Members of Germany's so-called Conservative Revolution (ed's note: mainly active in the period between World War I and World War II) saw the reasons for that decline in capitalism and consumerism, Westernization and individualization. In this sense, it is entirely correct to identify this mental climate as Breivik's inspiration, as the historian Volker Weiss did in a recent opinion piece for SPIEGEL ONLINE.

But what does one gain from calling the killer a "right-wing brother of the jihadists," as Weiss does, and characterizing the events in Norway as "the Talibanization of the Christian right"? This reinforces the old prejudice of the European left, namely, that religion in itself is always and exclusively dangerous. Yet this overlooks the fact that it was political, non-religious worldviews that inflicted endless suffering on humanity in the 20th century. It also suggests that there is a worldwide ecumenical movement of religions that are prepared to use violence and that have become a threat to the non-religious. In Weiss's mind, the events in Norway represent a "fatal embrace" between "crusaders and jihadists."

But if one is to establish a commonality between right-wing extremists like Breivik and jihadists, it lies not in a violent ecumenical movement, but in the shared psychosocial circumstances of the perpetrators. Terrorism is a problem among culturally uprooted, politically radical angry young men who are often educated but unsuccessful. They are men who rebel against a world in which they no longer feel at home. They have higher expectations of the world than it could ever fulfill.

In his influential book "Männerphantasien" ("Male Fantasies"), the German sociologist Klaus Theweleit offers a plausible explanation for the relationship between fascism and delusions of masculinity. If we consider the narcissistic outpourings of the mass murderer behind the Oslo and Utøya attacks, it is not difficult to recognize that he too dreamed the dream of the masculine knight -- depicted as courageous, tough, white, potentially brutal but ultimately irresistible -- who acts as the savior of a society portrayed as corruptible, soft, permissive, comfortable, feminine and in urgent need of purification. For Breivik, the sympathy that society expresses for the victims is presumably additional proof of its decadence. His goal was not to combat the Muslims, but to rescue his own society from disintegration.

What, then, is the source of this obsession with Islam? Fifteen years ago, there were about 2 million Turkish immigrants in Germany. Today, Germany's immigrants from Turkey are often lumped into a single category of "Muslims." Their critics say that it is not Turkish parents' own lack of education that prevents their children from doing well in school, but their religious affiliation. Muslim "headscarf girls" (ed's note: a phrase coined by the controversial German author Thilo Sarrazin) are characterized as both a threat to feminism and dangerous baby-making machines obsessed with "demographic jihad." Some cite the supposed threat of Muslim parallel societies, apparently ignoring the fact that for centuries Germans have lived in parallel societies consisting of Catholics and Protestants.

"Islam" has become a social phantasm. According to the French psychoanalyst Jacques Lacan, the term "phantasm" refers to a negated and repressed lack. As well as individual phantasms, which point to a repressed deficiency and to unattainable objects of desire, there are also societal obsessions, which relate to socially repressed deficiencies and unattained desires. The phantasm does not describe a real object. Instead, it indicates what is lacking.

What are these deficiencies? What is lacking? It isn't the same for everyone. Thilo Sarrazin decries what he sees as a lack of German children. The German politician Klaus von Dohnanyi believes immigrants are more devout than Germans. Others admire their family values. Turks who celebrate loudly and raucously after their team has won a football match are praised for their national pride. We even grudgingly acknowledge the willingness of suicide bombers to sacrifice their lives. Our own population seems lazy, indecisive, fearful, spoiled and endlessly demanding in comparison.

The only possible conclusion seems to be that -- to quote the title of Sarrazin's best-selling book -- Germany is doing itself in. But despite the commercial success of Sarrazin's apocalyptic tome, it did not trigger any tangible change within German society. Thus, the faction of Islam's critics continues to suffer in the midst of a population that supposedly lacks the collective will to defend itself.

We Are Actually Discussing Ourselves

Opposing this culturally pessimistic faction are the secularists who do not subscribe to the phantasm of Islam as the more aggressive and more powerful religion, but instead regard Islam as an anachronistic and -- given their own belief in a secular society -- ultimately illegitimate phenomenon. To these German intellectuals, the fact that an ailing Christian Church tries to help Muslims gain public recognition -- for example, by advocating chairs in Islamic studies at universities -- in a bid to save itself from demise, is doubly vexing.

For German secularists, what is lacking is a secular society. But Germany is still a long way from that. Almost two-thirds of Germans are members of a church, a number that, when compared with the 2 percent of Germans who are members of a political party, speaks to the still robust state of organized religion. Although we live in a secular state, it is not a secular society that the state seeks to protect, but a society that has a vibrant diversity of religious beliefs and worldviews and is therefore pluralistic.

There is a range of other deficiencies, wishes, fears and desires that motivate the phantasm of "Islam," from the yearning for a homogeneous German population to a highly individualized social model that deconstructs all things institutional. The real problem is that we are not actually discussing Islam at all. Instead, we are -- in the sense that we are talking about what we are not -- actually discussing ourselves. For this reason, I would give the following piece of Kant-inspired advice: "Have the courage to use your own religio-political reason without referring to the Other of Islam." It is not the dispute over the phantasm of "Islam" that is productive, but the impartial analysis of the goals of the religio-political parties that are at odds in our country.

This would remove an enormous burden from the everyday lives of Muslims. They could simply view themselves as a religious minority among others, like the Jews for example, a minority that seeks to practice its religion within the framework of what is legally permissible -- nothing more and nothing less. Problems relating to education, integration and equality could then be addressed as such in a nuanced and appropriate manner without being immediately framed within the context of a culture war. German Muslims would be relieved of the need to justify themselves every time an Islamist suicide bomber commits an attack somewhere in the world. They would be seen primarily as German citizens and only secondarily as members of a world religion.

This would make it easier to differentiate between the idea of "Islam" and the many ways to be a Muslim man or woman in Germany, a country that guarantees religious freedom. Finally, the various Muslim organizations could calmly coordinate among themselves, without having to confront external pressures, regarding how they want to jointly interact with mainstream society.

Without a fantastical view of "Islam," the German debate over religious policy would then become both tougher and clearer. Secularists, who seek to make religion an entirely private affair, and so-called culturalists, who seek to give priority to Christianity, could no longer sustain their joint campaign against Islam. They would be forced to recognize that the respective social models they envision are completely contradictory. Constitutional liberals, on the one hand, would have to join forces with the secularists in demanding equal rights for all religions, thereby opposing the culturalists. On the other hand, they would have to support the culturalists in preventing what the secularists seek, namely, making religious matters private and eliminating religion from the public sphere.

Within such a framework, groups such as the "ex-Muslims" would also lose their unique credibility. When, for example, the German-Egyptian political scientist and Islam critic Hamed Abdel-Samad advocates limiting the influence of organized religion in Germany "to detoxify this society," one could argue that the established religions in Germany promote anti-totalitarian and individual freedom and that they can look back on a tradition of keeping civil society alive. Germany's religious policy is not based on the elimination of religions from the public sphere, but the civilization of religions through public religious education. 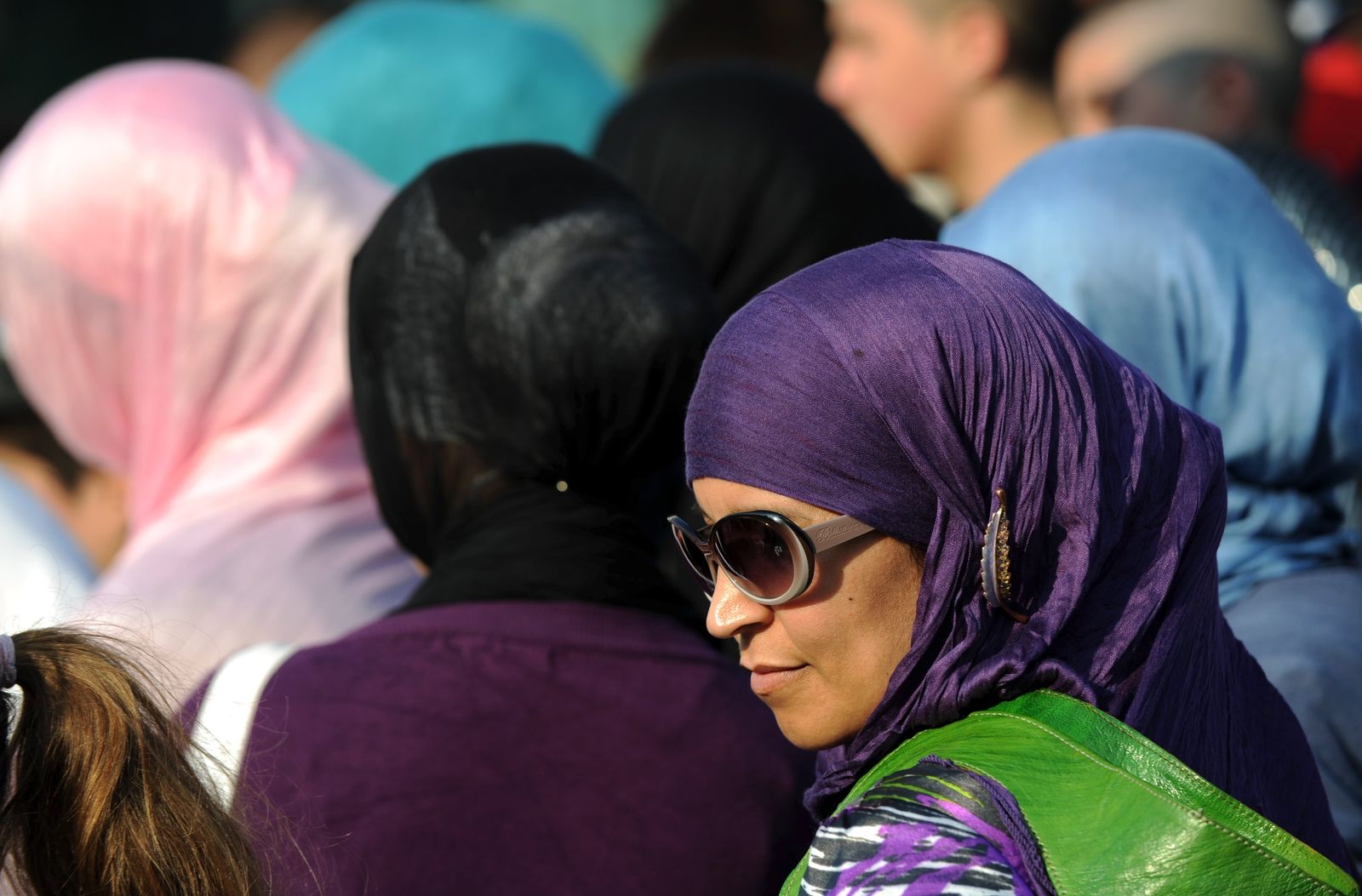 Germany is too obsessed with its Muslim population.