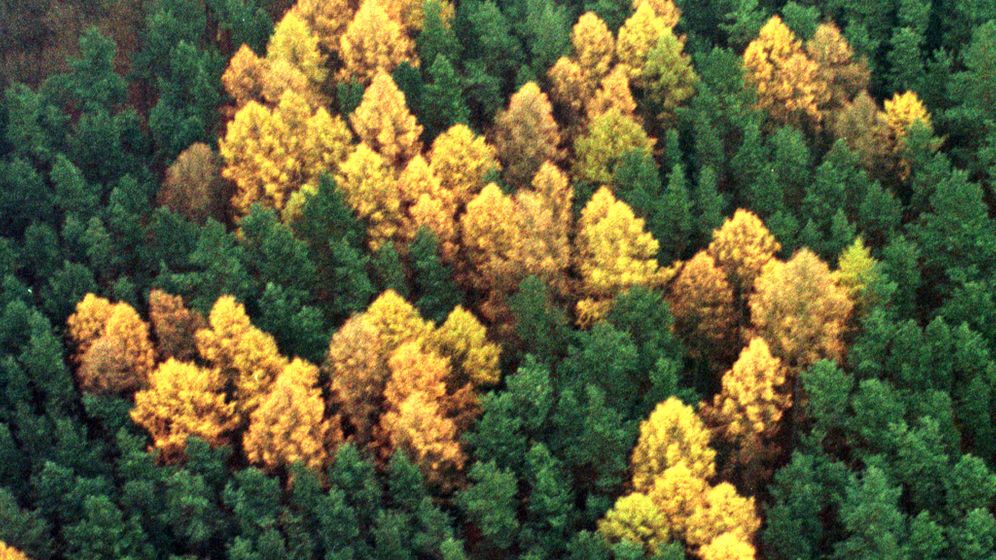 Photo Gallery: Swastikas in the Woods

Blame it on the larches. Brandenburg native Günter Reschke was the first one to notice their unique formation, according to a 2002 article in the Süddeutsche Zeitung newspaper. To be more precise, however, it was the new intern at Reschke's landscaping company, Ökoland Dederow, who discovered the trees in 1992 as he was completing a typically thankless intern task: searching aerial photographs for irrigation lines.

Instead, he found a small group of 140 larches standing in the middle of dense forest, surrounded by hundreds of other trees. But there was a crucial difference: all the others were pine trees. The larches, unlike the pines, changed color in the fall, first to yellow, then brown. And when they were seen from a certain height, it wasn't difficult to recognize the pattern they formed. It was quite striking, in fact.

As he was dutifully accomplishing the task he had been given, the intern suddenly stopped and stared, dumbfounded, at the picture in his hand. It was an aerial view of Kutzerower Heath at Zernikow -- photo number 106/88. He showed it to Reschke: "Do you see what this is?" But the 60-by-60 meter (200-by-200 foot) design that stood out sharply from the forest was obvious to all: a swastika.

Reschke is actually a fan of his native Uckermark region of northeastern Germany, extolling its gently rolling hills, lakes and woods, as the "Tuscany of the north." But what the two men discovered in 1992 in that aerial photograph thrust this natural idyll into the center of a scandal.

A Swastika as a Birthday Gift?

Reschke chartered a plane to fly over the area, and indeed, a neatly delineated swastika was clearly visible. The local forester, Klaus Göricke, set out to uncover the origin of the troubling larch formation, and he found out that the trees had been there for a long time. By measuring the trees, he came to the conclusion they had been planted in the late 1930s. That means that for decades, during every spring and autumn, a massive swastika took shape in the Kutzerower Heath -- surviving the Russian occupation, Communist rule in East Germany and the fall of the Berlin Wall without ever attracting notice.

The fact that it went undiscovered for so long was in part due to the short period of time each year that it was visible. Furthermore, it could only be seen from a certain altitude, and the airplanes that headed north out of Berlin were already much too high for passengers to see the swastika in the forest. Private planes, on the other hand, were forbidden in East Germany.

It didn't take long for rumors to spread about how the swastika got there in the first place. A local farmer claimed that he had planted the trees as a child, with a forester paying him a few cents for each seedling he put in the ground. Others reported that it was put there as a sign of loyalty after a nearby villager had been taken to the Sachsenhausen concentration camp by the Nazis because he had secretly been listening to the BBC. Still another version holds that a local Nazi leader ordered the trees planted on the occasion of Hitler's birthday. Finally, the Berliner Zeitung newspaper reported that it was planted in gratitude to the Reich Labor Service for building a street in Zernikow.

Whatever the truth may be, the story began to make waves well beyond the region. French reporters suddenly appeared in Zernikow, eager to fly over the heath to see the swastika for themselves. The daily Le Figaro published an article on the forest formation that reportedly led then-French President François Mitterand to call his German counterpart, Roman Herzog. Soon thereafter, the German president began pressuring the local forestry office to get rid of the offensive symbol.

A Scramble to Remove Trees

The effects were immediate. In 1995, forestry workers armed with chainsaws made their way to the copse of larches and cut down 40 trees. They reported back to their supervisors that the symbol was now unrecognizable, and the commotion surrounding the Kutzerower Heath quickly subsided.

But the forestry workers were badly mistaken. It took five years before their error was discovered, but in 2000, the news agency Reuters published photos of a bright yellow and clearly visible swastika in the forest near Zernikow -- even if the edges were a bit frayed. And the media response was once again immense. Even the Chicago Tribune wrote about it, noting that the swastika forest was not helpful for a region that had already become notorious for racist violence.

In fact, officials started becoming increasingly worried that the place could become a pilgrimage site for neo-Nazis. This prompted the Agriculture Ministry of the eastern state of Brandenburg to plan drastic measures. In 2000, Jens-Uwe Schade, a ministry spokesman, told Reuters that the intention had been to cut down all the trees in the area. But the BVVG, the federal office in charge of property management, blocked the plan because ownership of some of the property was in dispute and only gave the green light for state forestry officials to cut down 25 of the trees.

This was done on the morning of Dec. 4, 2000. Forestry workers had to be very careful about choosing which trees to cut down and about making sure that the swastika was no longer visible. They also had to cut the stumps just a few centimeters above the ground so that they could no longer be viewed from the air.

However, planting swastikas in forests wasn't something that only happened in the Uckermark. As Jens-Uwe Schade already explained in 2000, this had become "a fad among National Socialist foresters" during the Nazi period.

For example, already in the early 1970s, US soldiers complained to the government of the state of Hesse after finding not only a huge swastika on the southern slope of a spruce forest near a place called Asterode, but also the year "1933" formed by larches. A similar symbol reportedly caused a major stir in Jesberg, in northern Hesse, when it was discovered in the 1980s. And, in 2000, a professor of folklore found a swastika of evergreen Douglas firs planted backwards in a deciduous forest in Wiesbaden. In fact, reports soon started emerging about tree swastikas all over Germany.

In Sept. 2006, the New York Times also reported on a complete forest near the remote village of Tash-Bashat, in Kyrgystan, shaped as a swastika. The origins of this swastika in reverse measuring some 180 meters (600 feet) across were also shrouded in legend and uncertainty. One villager claimed that an ethnic German forest supervisor, who had been exiled to the east but was a Nazi sympathizer, directed the planting of the forest in the 1940s. Another reported that the trees had been planted by a mysterious "professor" in the 1960s before he was taken away by the KGB. A local guide said the trees had been planted in the late 1930s as a sign of German-Russian friendship when Hitler and Stalin signed the Molotov-Ribbentrop non-aggression pact. Reporter C.J. Chivers also found legends the forest had been planted by German POWs pressed into forestry duty. He never did track down its true origins, but he wrote that, if it really really was planted by German prisoners, the "symmetry in the tree line … may be the Third Reich's only practical joke."