SPIEGEL: Twenty-five years after reunification and almost seven decades after the end of World War II, has Germany become a country just like every other in terms of security policy?

Rasmussen: Germany is a normal country today, with the kinds of rights and duties other countries have. That's why Germany should play an important role in foreign and security policy, be it in the EU, NATO or in international politics.

Rasmussen: I don't want to interfere with a domestic German debate. But I do very much agree with the position expressed by the German president. I welcome this debate. And not only as NATO secretary general, but also as the former prime minister of Denmark, the small neighbor country once occupied by Germany. Germany needs this debate. I can understand Germany being very cautious when it comes to international military deployments because of its past. But the time has come in Germany for this debate. Europe is ready for it, too. The goal should be to develop a common understanding for how Germany's new role might look.

SPIEGEL: Gauck has been badmouthed as a "warmonger" for his push. Are the Germans a pacifist people?

Rasmussen: The Germans are still very conscious of their past and are therefore reserved in terms of their international engagement. I respect this position. At the same time, Germany has become such an important actor on the world stage economically and politically that it can't simply sit back when it comes to international affairs. Germany is strong, and everyone expects it to take on an active role. That is decisive for Europe's future.

SPIEGEL: During the Ukraine crisis, many Germans expressed understanding for Russia's approach. How certain are you of Germany's ties with the West?

Rasmussen: The polls available to us show that it's not just the political leadership, but also the people who have faith in the trans-Atlantic partnership. The view held by most Germans is that Europe's security is based on the alliance with North America. This is also emphasized in the contract stipulating the goals of the grand coalition government between Chancellor Angela Merkel's conservative Christian Democrats and the center-left Social Democrats.

SPIEGEL: But the Ukraine crisis has also shown that many Germans don't want ties to the West that are too strong. Many would like to see Berlin take on a mediating role between the West and the East.

Rasmussen: That doesn't surprise me. The Germans are still thankful that reunification was possible so quickly after the collapse of Communism. Hence the notion that Berlin ought to be a bridge between East and West. In this sense Germany has a special role to play. At the same time, given the current events in Ukraine, I would also say: The best way to find a political solution is for the West to demonstrate unity and strength.

SPIEGEL: Is Germany being too tolerant toward Moscow? Should it take on a tougher position through sanctions, for example?

Rasmussen: So far we have succeeded in speaking with one voice within the EU and NATO in the Ukraine crisis. The real test still lies ahead of us, when the European Union discusses the so-called third round of sanctions.

SPIEGEL: Even within NATO opinions about what needs to be done are already drifting apart.

Rasmussen: We have unanimously agreed on all important steps - that's the basis for all decisions in the alliance. We have strengthened our surveillance of air space, dispatched naval ships in the Baltic and Black seas and turned national military exercises into joint NATO maneuvers. As it did in Afghanistan or in Kosovo, Germany also played a very active role.

SPIEGEL: Within NATO, some are pushing for the stationing of more troops in Eastern Europe. Others, including Germany, do not want to provoke Russia.

Rasmussen: We have to be realistic. Past experiences play a different role in every country. The Baltic states and Poland are fearful for their security in light of Russia's illegal actions in Ukraine. The Russian actions evoke how Russia treated them in the past. Germany, for its part, remembers the constructive role that leaders in Moscow played at the time of reunification. We have to understand that the nations are coming with different perspectives.

SPIEGEL: Do you believe that German soldiers are prepared to die for Estonia or Latvia?

Rasmussen: That's a very pointed question and a hypothetical one on top. Let me just say this: I have no doubt that a NATO country, if it is attacked, can count on the aid of all other 27 member states.

SPIEGEL: So you're saying Article 5 of the NATO treaty, under which an attack on one is considered an attack on all, is not an empty promise?

Rasmussen: Definitely not. Article 5 is the essence of NATO. If we do not honor this obligation 100 percent in an emergency, then this alliance will be dead.

SPIEGEL: Is NATO even capable of defending the Baltic states with its current makeup?

Rasmussen: Yes, we can. At the same time, Russia's actions in Ukraine also taught us that we need to improve our ability to react rapidly. We are currently developing plans for that.

SPIEGEL: Russia will perceive that as a provocation.

Rasmussen: That can't be an argument, because if the Kremlin wants to, it can view anything as a provocation.

SPIEGEL: There is a current discussion about the procurement of combat drones in Germany. Defense Minister Ursula von der Leyen has announced she would seek approval from parliament before any drone deployment takes place. Is that even possible in practice if it effects allies?

Rasmussen: I think so. It is normal in democracies for parliament to monitor the use of military means.

SPIEGEL: But many other NATO countries don't have this strict requirement of parliamentary approval. In France, for example, the president can make his own decisions on deployments by his army abroad.

Rasmussen: The distribution of power may be handled differently in constitutions from country to country, but this principle of political checks and balances exists everywhere. Nevertheless, your question still points to a challenge. We need more multilateral cooperation, which we call "smart defense" here at NATO. Some countries are having growing difficulties procuring military equipment on their own because of sinking defense budgets. That's why they will need to group together.

SPIEGEL: And that will disrupt the strict requirement of German parliamentary approval?

Rasmussen: In a multilateral context, every country must accept that the others also have a say. It must be ensured that these military capabilities can also truly be deployed. If there's a risk that a country will issue a veto against the deployment of such weapons, the other partners will hesitate in investing in such projects. So parliaments need to make sure that the processes work smoothly. However: Where there's a will, there's also a way.

Anders Fogh Rasmussen, 61, has served as NATO secretary general since August 2009. His term is expected to end this summer. He previously served as prime minister of Denmark from November 2001 to April 2009. 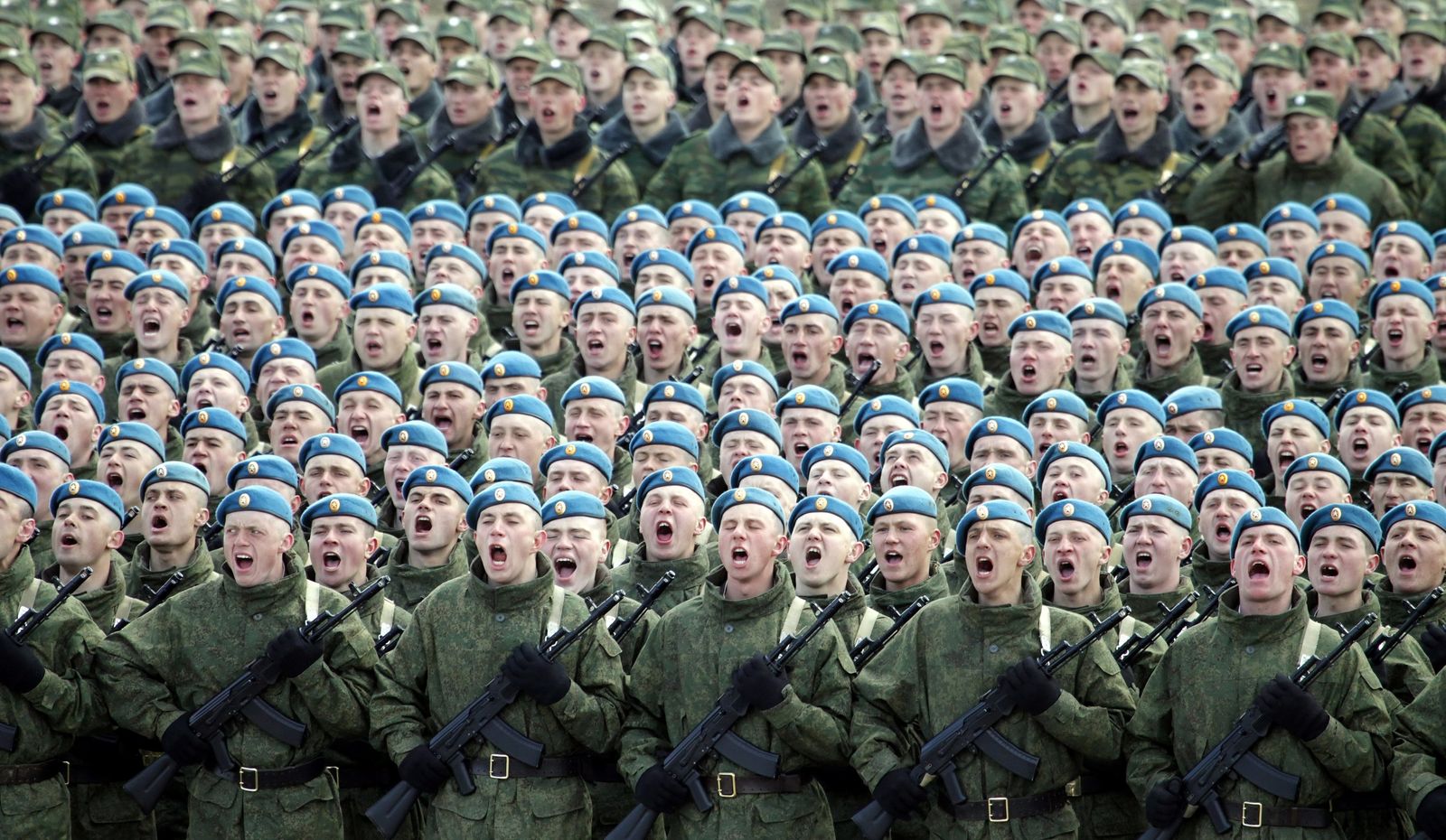 Russian troops march outside of Moscow: "If the Kremlin wants to, it can view anything as a provocation."