Donald Trump was in a good mood. He had just driven NATO into the abyss by threatening to "go his own way" if the allies didn't step up to the plate and finally dedicate more money to their defense budgets. Now, he was in the overcrowded White House press room bragging about how he had cracked the whip. Thanks to his intervention, billions would now be flowing into NATO member-state militaries, he boasted. "Germany has agreed to do a lot better than they were doing," Trump announced.

Defense policy experts within Angela Merkel's coalition government could, of course, merely have returned to business as usual after Trump's bizarro-world appearances this week and last. They're familiar with his lies, after all. Instead, though, a dispute over the German defense budget has once again flared up in Berlin, and politicians with the center-left Social Democrats (SPD) and Merkel's conservatives, which are paired in the chancellor's coalition, are now bickering. They want to know exactly what Chancellor Angela Merkel said last week when the leaders of the NATO member states met privately.

Even before Trump's election victory, the agreement reached at the 2014 NATO summit in Wales that the allies would aim to spend at least 2 percent of their gross domestic product on defense by 2024 had become a bone of contention within the government coalition in Berlin. Although many politicians with Merkel's Christian Democrats have declared their support for that goal, some SPD members warned against what they described as a "spiral of defense spending." Former Foreign Minister Sigmar Gabriel of the SPD said he didn't even know where Germany was supposed to station the many aircraft carriers that could be bought with the additional funding. Last week Trump went even further, demanding that defense budgets amount to 4 percent of annual GDP.

German conservatives and the SPD laboriously agreed in budget negotiations to increase the defense budget in the coming years. But as Berlin stated in at the NATO summit in Brussels, those increases would not go beyond 1.5 percent of GDP.

That's too little, Trump complained. It was also too little for NATO Secretary-General Jens Stoltenberg, not to mention Germany's own defense minister. Ursula von der Leyen has many plans for her poorly equipped troops, whose tanks are largely out of date and whose helicopters are often inoperable. According to calculations made by the Defense Ministry, one of its key projects could also be in jeopardy if it doesn't get a boost to its budget: the announced increase in personnel to 198,000 soldiers by 2024.

So, what did the chancellor promise behind closed doors in Brussels? Because it wasn't just Trump who spoke of success after the meeting. Other participants also reported that there had been movement. The American president's words may be too sharp for some, but his message is a legitimate one, says Lithuanian Foreign Minister Linas Linkevicius. The 2-percent target had only been taken seriously by a few NATO members in the past, but this has changed as a result of the summit, he argues. "The pressure from Trump has had an effect," says Linkevicius.

At first, the chancellor engaged with her allies just as she usually does. She reminded them that Germany is the second largest provider of troops in the NATO alliance. She also pointed out that the German armed forces, the Bundeswehr, are very active in Afghanistan and in the Baltic region. But 2 percent by the beginning of 2019 as Trump had just demanded? Completely impossible, said Merkel.

Then she began to talk about 2024, the actual target-date set for reaching that goal during the Wales summit. She said it would be very difficult to get "our parliament" to agree on 2 percent by 2024. Merkel then added another sentence that got the group's attention. "The debate is ongoing."

Many NATO leaders interpreted Merkel's remarks as an indication that the German government wants to do more than it has previously announced. The Baltic states, in particular, which have long been calling for greater solidarity from Western European allies in responding to Russia's threatening posture, expressed their satisfaction. Lithuanian Foreign Minister Linkevicius confirmed that the German chancellor took a "very responsible position" at the summit. "She said she would do her best to increase her country's defense spending." Merkel herself said after the meeting that the governing coalition in Berlin wants to sit down and revisit the budget.

Other NATO allies in Brussels may have liked what they were hearing, but back home in Berlin, Merkel's statements have proven divisive, especially given that no representative of her junior coalition partner, the Social Democrats, was in attendance at the summit. The only other person attending was Defense Minister von der Leyen, who, like Merkel, is a member of the CDU.

Defense policy coordinators within Merkel's party feel affirmed by the NATO summit in their demand to revisit budgeting plans for the medium term. "Germany must reach 1.5 percent by 2021," says Johann Wadephul, the deputy whip for the conservative group in parliament. "This is possible in terms of fiscal policy and it is urgently needed in terms of security policy." He argues it is the only way for the 2-percent target to be reached by 2024.

But politicians within the SPD see it differently. "Coming as it does after the U.S. president's blackmail attempts at the NATO summit, the timing for putting the next increases in the defense budget back on the table is unnecessary and terrible," criticizes SPD defense-policy point man Fritz Felgentreu. "Within the coalition government, we already have a sensible plan for better equipping the Bundeswehr." His party ally Niels Annen, a top official in the Foreign Ministry, also considers it "poor policy to reduce a complex problem to a symbolic figure."

Thus far, though, even the increase to 1.5 percent that has been pledged has been anything but certain. Finance Minister Olaf Scholz of the SPD has planned a modest increase in the defense budget for the coming year, but it is questionable whether that will continue. Meanwhile, von der Leyen routinely laments that she has to fight each year just to get an increase in her budget.

Budget shortfalls can be found all over the place within the Bundeswehr. Even creating the "very high readiness joint task force" (VJTF) for NATO in recent months has revealed painful shortcomings in the Budeswehr's equipment. In an embarrassing episode, the VJTF troops from Germany were recently forced to borrow equipment from numerous other Bundewehr units. The situation is similarly bleak when it comes to the preparedness of various weapon systems.

And none of the minister's planners are willing to guarantee that the budget increases so far agreed to will go far enough to ensure any real modernization of the German military. Indeed, the deficiencies are so great that it will likely take decades before the Bundeswehr is optimally equipped.

But even if the military budget rises to 1.5 percent of GDP as agreed, von der Leyen must fear for the future of one of her pet projects. Two years ago, she announced she would increase the Bundeswehr's troop strength from the 180,000 soldiers at present to 198,000. Otherwise, she argued, the armed forces would be unable to do their job in terms of national and alliance defense.

Experts within von der Leyen's ministry are already warning of a worsening financial situation. According to an internal document prepared for Gerd Hoofe, a senior Defense Ministry official, the significant increase in personnel will cost almost a billion euros in 2024 and the years thereafter. This would lead to a shortfall in funding for equipment. The consequence being that a final decision on the staffing increases, which was previously expected in early July, has now been delayed until autumn.

For that reason alone, conservatives are calling on the SPD to budge on the budget. "If the increase to 200,000 soldiers already exhausts the available financial resources, it will become that much clearer how necessary it is to go beyond the 1.5 percent," argues Roderich Kiesewetter, the Christian Democratic chair of the Foreign Affairs Committee in parliament.

Meanwhile, the Americans are continuing to exert pressure, even after the summit. On Tuesday, Trump's ambassador in Berlin, Richard Grenell, paid an introductory visit to the Finance Ministry. His meeting with Finance Minister and Vice Chancellor Olaf Scholz lasted around 40 minutes. Although the American diplomat's tone was more polite than that of his president, he was nevertheless tough on the issue of defense spending. Grenell warned that the Germans need to be serious about agreements made within the NATO framework.

Scholz initially defended the 1.5-percent mark, noting that 62 billion euros represents almost 50 percent more than current defense spending. But he also didn't rule out the possibility of the Bundeswehr getting more funding. In the event that greater wiggle room can be found for the budget, Scholz said, improvements would be conceivable.

He may not have been agreeing to anything specific. But at least it wasn't an outright lie. 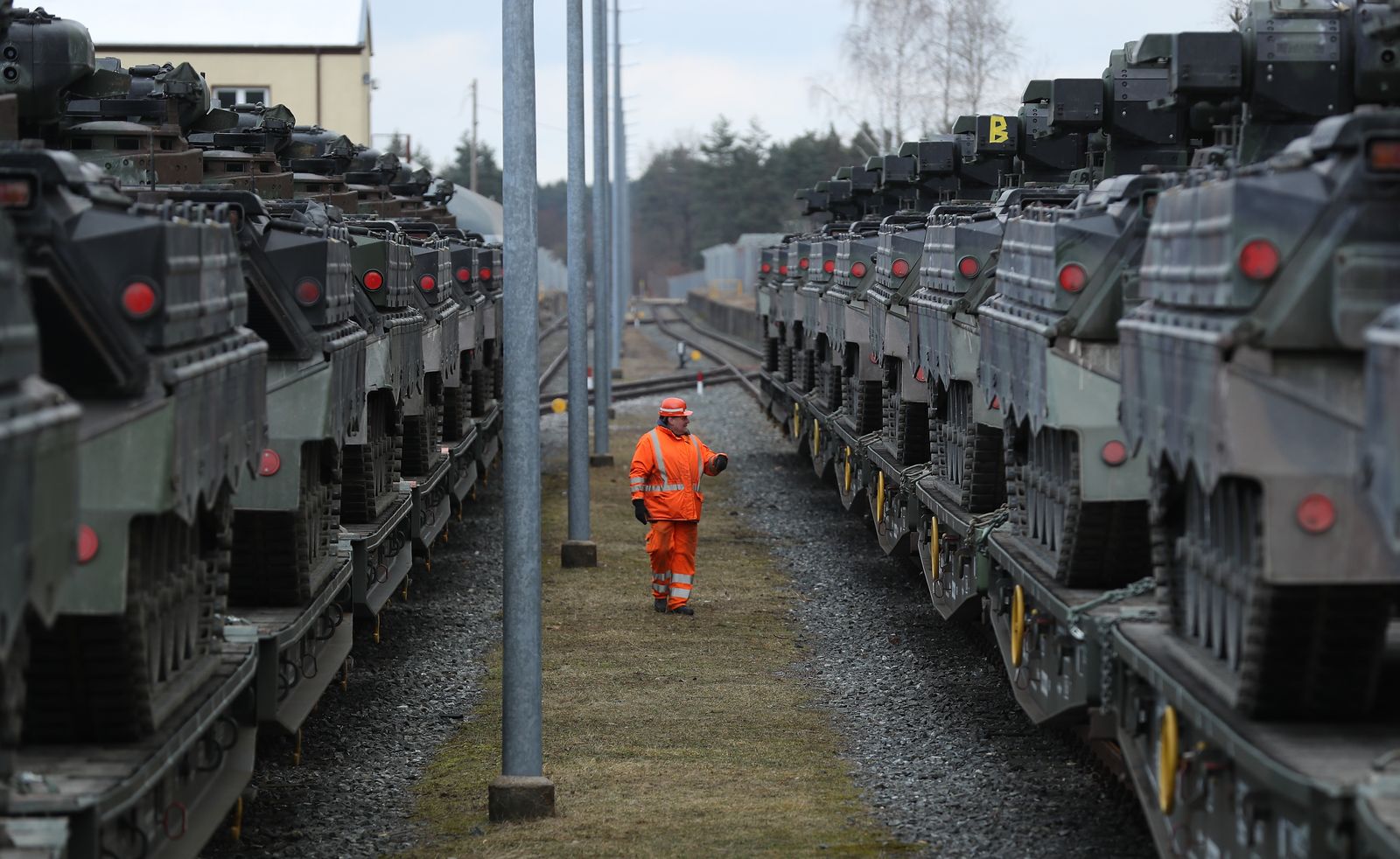 Tanks belonging to the German military are loaded for transport to Lithuania.