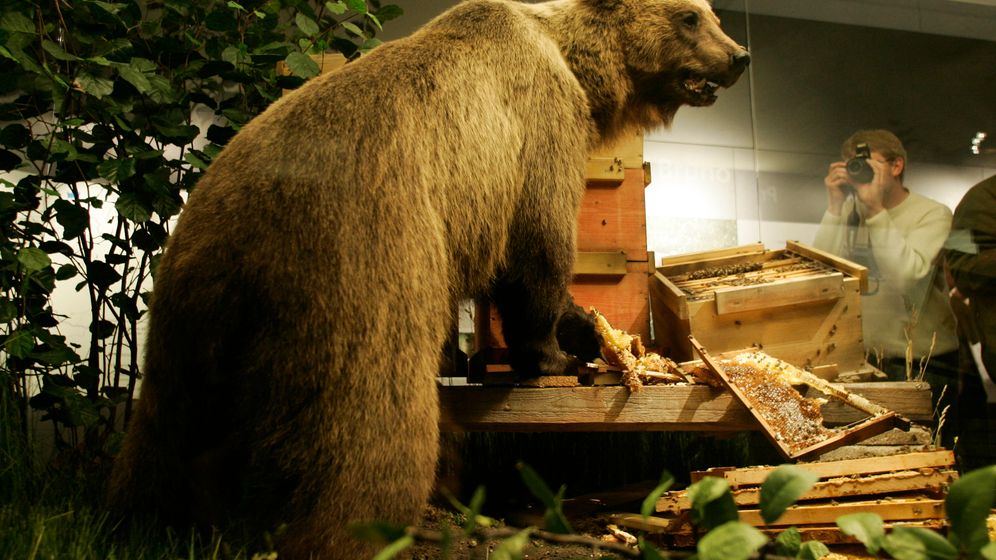 It was one of those great moments in Bavarian politics. When Bruno the wild brown bear wandered over the Alps from Italy into the southern German state, then-Governor Edmund Stoiber was quick to address the matter. Actually, Bavaria was pleased to welcome bears to the state, he said. Provided they are normal bears. Stoiber's definition at the time: "The bear that normally resides in the forest, doesn't leave it and kills perhaps one or two sheep per year."

So far, so good. But Bruno, who wandered over from Italy's Trentino province, had a well-documented penchant for killing livestock, pets and other animals. "And we see a difference between the normal bear, the malicious bear and the problem bear," Stoiber explained. And, yes, "it is very clear that this bear is a problem bear," he concluded.

The government of Bavaria ultimately gave permission for the bear to be shot by hunters. Bruno, the first wild bear to arrive in Bavaria for over 170 years, was killed on June 26, 2006, in the mountainous Kümpflalm area above Spitzingsee lake in the Alps.

US Diplomats Wax Poetic about Bruno

Of course, American diplomats stationed in Munich, the capital of Bavaria, and in Berlin didn't miss any of this. Information about the bear hunt was promptly cabled back to Washington. In the newly-leaked US diplomatic dispatches, one can find detailed information about Bruno the brown bear. That summer the US Consulate, located near Governor Stoiber's offices in Munich, registered some fundamental thoughts on the German understanding of the natural world.

Click on the headline in order to read the text ...

1. Despite all the attention surrounding the World Cup, EADS' woes and health care reform, Bavarians and many Germans have been transfixed by a two-year-old brown bear named "Bruno" that wandered across international borders into Bavaria, a government minister's agenda, a hunter's crosshairs, and the hearts of millions. Following Bruno's government-sanctioned shooting, questions remain over the political fallout and the future of wild bears in the German Alps. The incident also offers a snippet of insight into German attitudes toward the environment. End Summary.

2. The bear, dubbed "Bruno" by the media, began his journey in Italy, where he was released as part of a program to reintroduce brown bears from Slovenia in the Alps. After wandering across the border from Austria, he was first sighted in Bavaria on May 20. As the first wild bear seen in Germany since 1835, Bruno was initially extended a warm public welcome by Bavarian Environment Minister Werner Schnappauf -- after all, Bruno could prove a boon for Bavaria's image just as visitors from around the world arrived for the World Cup.

3. However, as Bavarian Interior Minister Beckstein has often emphasized, foreigners are only welcome in Bavaria provided they are willing to adapt to German culture and traditions. Bruno quickly wore out his welcome by raiding stables, killing sheep, chickens, and a child's pet rabbit. The Bavarian government declared Bruno "Ursus non Grata" and ordered that he be shot or captured. Vexed by Bruno's unchecked roaming across Bavaria -- he was even seen sitting on the steps of a police station eating a guinea pig -- Minister-President Edmund Stoiber took to referring to him as "the Problem Bear."

4. Nevertheless, Bruno appeared to win the battle for the hearts and minds of the public -- Schnappauf received some 1,300 letters and drawings from children all over Germany appealing for Bruno to be kept alive. Following criticism of the edict that Bruno be shot, Schnappauf gave the animal a stay of execution and, at a cost of over Euro 125,000, flew in a special trap from Colorado and a team of Finnish bear hunters with specially trained dogs. After the Finnish hunters failed at their task, Schnappauf reinstated the shoot-to-kill order effective June 26. Early in the morning of that same day, Bruno met his demise at the hands of an (as yet) unnamed hunter. Bruno, stuffed, is to be put on display at a natural history museum in Munich's Nymphenburg Palace.

5. Almost immediately, criticism of the Bavarian government started pouring in from across Bavaria and the world. Minister Schnappauf has received multiple death threats and calls for his resignation. State prosecutors have received nine legal complaints, several against Schnappauf, for alleged breaches of hunting and animal protection laws. Death threats have also been made against the hunter. Schnappauf has defended himself by saying that had Bruno attacked a human, calls for his resignation would be better justified. Future bears, he said, would be welcome in Bavaria, provided they behaved appropriately.

6. The "Bruno" saga has received a disproportional share of press play, including in the international media. The Munich tabloid "TZ," which has devoted no less than eleven cover pages to Bruno since May 21, published an obituary threatening revenge at the voting booth for Bruno's death, and called on people to send protest letters and e-mails to Minister-President Stoiber and Minister Schnappauf. Germany's major tabloid "Bild" even suggested a state funeral for Bruno might be appropriate. "Spiegel Online's" daily updated """ included an obituary entitled "?" and compared Bruno's death with that of Elvis, Marilyn Monroe, Jimi Hendrix, John Lennon, and Princess Diana. Mirroring the sentiment of the general public, the piece concluded: "For indeed Bruno was murdered, shot down in the prime of his young life, executed

in cold blood. We should reflect now on whether we feel happy with what we have done. We share a collective guilt for Bruno's demise, our inability to co-exist with nature has yet again prompted us to reach for the trigger. Bruno is dead and we are all the poorer for it: May his ursine soul rest in peace."

7. Bruno has been the media's June flavor of the month. While the attention lavished on Bruno has taken nearly everyone by surprise, we expect the criticism leveled at Schnappauf and Stoiber to be relatively fleeting -- radical animal rights advocates who make death threats aren't generally considered the CSU's base anyway. Perhaps the greatest insight from the whole Bruno affair might be that despite the veneer of "greenness" extolled by German society, modern Germany in fact coexists uneasily with untamed nature. The contrast between the massive hunt for the first wild bear seen in Bavaria in over 170 years and the recent story of a clawless housecat treeing a bear in New Jersey couldn't be much more stark. True wilderness, even in mountainous Bavaria, hasn't really existed in Germany for generations -- nature is good, as long as it is controlled, channeled, and subdued. If the saga of Bavaria's "Problem Bear" is any indicator, the strategy of reintroducing wild bears to the Alps, at least the German Alps, may be doomed to failure -- that is, unless the bears are willing to cooperate by not being too wild.

8. This report has been coordinated with Embassy Berlin.

9. Previous reporting from Munich is available on our SIPRNET website at www.state.sgov.gov/p/eur/munich/ .

They noted with some amusement that Bruno had even pushed the football World Cup, which was being held in Germany, into the background. The diplomats described the wild bear chase that ensued and the doomed mission undertaken by Finnish bear hunters who had been specially flown in for the task. They were almost poetic in their writing: "Early in the morning of that same day, Bruno met his demise at the hands of an (as yet) unnamed hunter."

According to the US diplomats, Bruno had forfeited his right to Bavarian hospitality because he was not "willing to adapt to German culture and traditions," as former Bavarian Interior Minister Günther Beckstein had often required of every other foreigner. And obviously the diplomats did not omit Stoiber's classification of Bruno as a "problem bear."

The end of a June 30 dispatch from Munich offered the following shrewd analysis: The greatest insight to be gained from the whole Bruno affair was that, although German society liked to appear environmentally friendly and "green," modern Germany still had difficulty relating to untamed nature.

There had not been genuine wildlife in the mountainous parts of Bavaria for generations, the report said. "Nature is good, as long as it is controlled, channeled and subdued," it concluded. The diplomatic prognosis was dim. "If the saga of Bavaria's 'Problem Bear' is any indicator, the strategy of reintroducing wild bears to the Alps, at least the German Alps, may be doomed to failure -- that is, unless the bears are willing to cooperate by not being too wild."

After the death of the bear, the Bavarians occupied themselves in a very Prussian manner with possible successors to Bruno. A "Management Plan for Brown Bears in Bavaria" was developed, complete with concrete tips for hikers, should they happen to accidentally encounter another Bruno at some point in the future. "Under normal circumstances a bear will not attack," one tip helpfully offers. "They will smell you and judge you not to be dangerous." Regardless, hikers should make their presence known to bears by, for example, singing loudly.

But, since Bruno, there hasn't been a single brown bear to have wandered into Germany from abroad. Apparently it didn't take access to the confidential US diplomatic dispatches to get that message across to Italy's bear population.