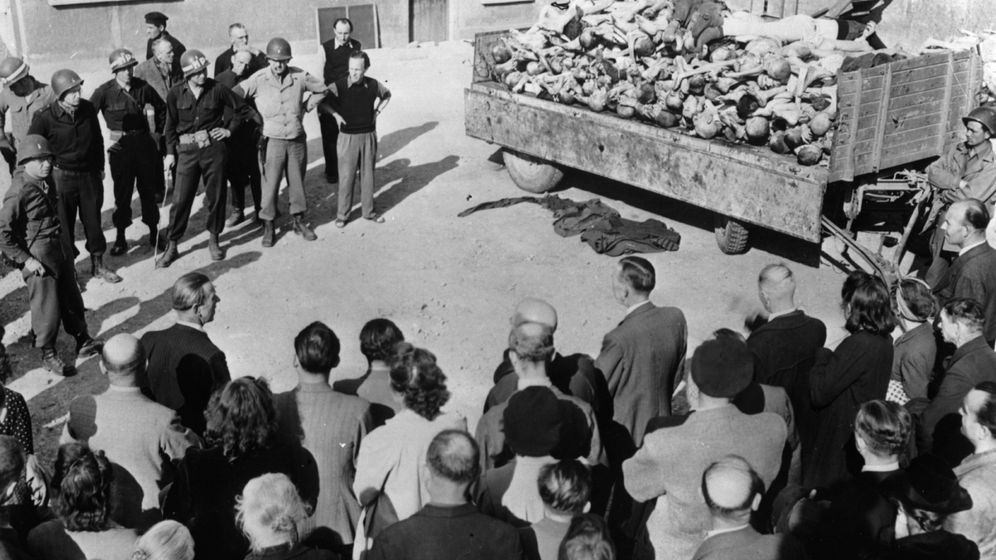 Photo Gallery: Murder Behind the Lines

The end was in sight, with Allied troops already on the outskirts of the city. Nevertheless, a number of citizens of Celle in north-central Germany became murderers on April 8, 1945.

They participated in the hunt for hundreds of concentration camp prisoners who, during an American bombing attack on the city and its train station, had fled from the freight cars, some of them in flames, in which they were being transported. Local police officers, guards and members of the Volkssturm national militia and the Hitler Youth executed their victims in a nearby forest.

The prisoners were "killed like animals," many of them execution style, according to a British military report. Up to 300 people died in the massacre, with the leader of a Hitler Youth group in Celle killing more than 20 alone. The Allies captured the city four days later.

The outbreak of violence in this part of the state of Lower Saxony is described in detail in a book by Daniel Blatman, "The Death Marches: The Final Phase of Nazi Genocide," which comes out in German translation this week. The book addresses the broader issue of the death marches of concentration camp prisoners in 1944 and 1945, during the waning months of the war.

Blatman, a historian at The Hebrew University in Jerusalem, comes to an unsettling conclusion about the last phase of the Nazi mass murders: "The more the war approached its end, and the more obvious the prisoners' presence in the midst of the German population became, the more regularly German civilians participated."

Those civilians included government and local officials, members of the Nazi Party and the Hitler Youth, as well as local residents. They abused or killed large numbers of those who, in the last stage of their lives filled with suffering, were forced on marches or had spent days being transported across Germany in overfilled freight cars.

At least 250,000 former prisoners lost their lives on death marches between January and May 1945. Their graves line roads in parts of Lower Saxony, Bavaria and Mecklenburg, and in almost all of the places where the Nazis had built their camps.

The death marches began in occupied Poland, where the SS emptied out the larger camps in places like Majdanek, Gross-Rosen and Auschwitz as the front approached. Many prisoners were not even given enough time to pack their few belongings. Often clothed in nothing but rags and wearing wooden shoes, they staggered across the overcrowded roads in the bitter cold.

The prisoners were forced to share the roads with retreating German soldiers and civilians fleeing from the Red Army. All too often, the fears of the panicked masses erupted into violence against the weakest of those with whom they shared the route.

The tone was set by the SS, whose guards murdered without restraint. In Palmnicken, for example, 50 kilometers (31 miles) from the former East Prussian city of Königsberg (today's Kaliningrad), the henchmen drove more than 3,000 prisoners from the Stutthof camp, who had been marching for days, onto the beach of the frozen Baltic Sea and mowed them down with their machine guns.

A few weeks later, the death marches led directly through the territory of the German Reich. In one case, prisoners from the Hessental camp near Schwäbisch Hall in southwestern Germany were forced to march eastward toward Bavaria. After the war, investigators with the French occupation force unearthed mass graves in several locations along the route. They found 17 bodies in Sulzdorf, 36 in Ellwangen and 42 in a village called Zöbingen. Death marches that began at the Dachau concentration camp passed through Poing near Munich and continued through Wolfratshausen and Bad Tölz. Groups of prisoners from the Flossenbürg camp crisscrossed Bavaria.

The number of perpetrators continued to grow. Historian Blatman estimates that thousands, perhaps even tens of thousands, of ordinary citizens became accomplices of the murderous regime near the end of the war. In the northern city of Lüneburg, for example, a scenario similar to what had happened in Celle unfolded on April 11, 1945, when civilians and police officers captured prisoners who had escaped from a train that had been bombed. Members of the German navy later shot the prisoners at the Lüneburg train station.

There is no historical evidence that anyone at the very top, such as Hitler or SS chief Heinrich Himmler, gave the orders to liquidate the camps. The last weeks of the war were characterized by a gradual breakdown of administrative order. The jurisdiction over the groups of prisoners being forced to march around the country changed in rapid succession, and many local officials acted on their own authority when deciding what to do with the prisoners.

But why did so many officials behave with such brutality, and why did ordinary civilians become involved, when it was already clear that the Nazis' "final victory" was a fantasy?

To answer this question, Blatman cites the example of the guards, a group of people who had become merciless sadists over the years. The concentration camp guards saw themselves as frontline soldiers against the enemy within, and as defenders of the Aryan race and the superior nation. Now that they were no longer working in the camps, they continued their mission, except that they were relieved of their prescribed routines. Worried about being caught by the Allied soldiers in the company of bands of walking skeletons, they chose to kill the potential witnesses instead.

Similar motives also turned many people on the home front into prepetrators when the trains filled with prisoners suddenly arrived in their towns. Mayors, local party officials and men with the Volkssturm militia were determined to prevent the oppressed concentration camp inmates from gaining their freedom in their own backyards and exacting revenge for the injustices they had suffered. This logic led them to believe that they were protecting the welfare and safety of their fellow citizens by killing the strangers in their striped prison uniforms.

A decade of indoctrination, or what Blatman calls a "genocidal mentality" that had systematically dehumanized the Jews and the Slavs, led to the collective hunt. Adolescent members of the Hitler Youth often reached for their guns as a matter of course.

Of course, there were also farmers who handed bread or potatoes to the starving prisoners or concealed them. There are also accounts of cases in which prominent local residents, including a lower-level Nazi official and a respected attorney in Burgstall in the Altmark region of eastern Germany, rescued larger groups.

But many of the marches ended in disaster, as was the case in Gardelegen, a town in east-central Germany, where US soldiers found hundreds of charred and mangled bodies in a barn in mid-April 1945. They were the bodies of prisoners from various camps who had been forced inside.

It was later discovered that people had volunteered to guard the prisoners, "including ordinary civilians, some of them armed with hunting rifles, who mutated into prison guards of their own volition," Blatman writes. The massacres began when the prisoners were being marched to an empty cavalry school in Gardelegen, where they were housed temporarily, and where adolescents boasted: "We're going hunting, to shoot down the zebras."

'Responsibility of the Entire German People'

Men from the Volkssturm militia, police officers, soldiers from a paratrooper division barracked nearby, guards and civilians helped drive the doomed prisoners into the barn. Then they locked the doors, lit gasoline-soaked straw on the ground and tossed hand grenades into the building. Anyone who attempted to escape the inferno ran into a hail of bullets. Some 25 prisoners survived, while about 1,000 died.

A few days later, the victims were given a burial with military honors. The Americans ordered the residents of Gardelegen to attend the ceremony.

"Some will say that the Nazis were responsible for this crime," Colonel George P. Lynch, chief of staff of the 102nd US Infantry Division, told the Germans. "Others will point to the Gestapo. The responsibility rests with neither. It is the responsibility of the entire German people."