The 132 passengers aboard Lufthansa Flight LH 044 had experienced the fright of their lives by the time their plane rolled up to the gate at the Hamburg airport in Germany. But they weren't yet aware of just how much danger they'd been exposed to. In fact they might never have found out were it not for an amateur video taken on the ground. It shows the Airbus A320 aircraft trying to land in a storm: As the plane begins to touch down, a strong gust tips it to one side, so it scrapes a wing on the runway before the pilot aborts the landing and begins to ascend.

The near-crash occurred on March 1, 2008, in weather caused by the intense low-pressure front Emma. Initially, investigators at Germany's Federal Bureau of Aircraft Accident Investigation (BFU) believed little more was at play than a flight error. "But we were suddenly presented with new facts," Johan Reuss, the official responsible for investigations at the Braunschweig, Germany-based agency, told SPIEGEL ONLINE. On Thursday, his team published an 82-page report (link is to a PDF file in English) -- a document that includes 12 safety recommendations drawn from the incident.

The report's surprising finding: The Airbus aircraft demonstrated a behavior that had not been clearly described in standard documentation. Airbus, in other words, had left pilots unclear about how the aircraft might respond in this particular situation. Airbus spokesman Stefan Schaffrath said Thursday that his company would research the matter. "We will analyze the report very carefully," he said, "because safety is our top priority."

The cause of the incident was a quirk in the Airbus A320's flight computer. On the first near-landing, it switched to ground mode -- which, among other things, limits the power of the ailerons and restricts the pilots' power to move them. They had to look on powerlessly as the flight computer took control and put the plane at the mercy of the storm.

Without immediate and forceful counter-steering with the aileron, the plane was unable to withstand the crosswind. It tipped so far that its wingtip hit the runway. Only when the pilot started to ascend again did the flight computer return to flight mode and free the aileron. "Until (an altitutude of) a few meters above the ground, the landing approach was stable," said BFU investigator Reuss. "But the pilots encountered a situation that they could only escape by taking off again."

In media reports on the near-crash, the masterful work of the pilots was praised. Then doubts began to circulate about the flying skills of the flight's then 24-year-old co-pilot, who had been at the controls. Aviation experts also criticized the choice of runways used for the landing. But Thursday's BFU report provides exculpatory information about both the pilot and co-pilot. "After they left cruising altitude, both of the runways available for the landing were showing the same crosswinds," Reuss said. He also noted that Hamburg airport's Runway 23, which the Lufthansa captains decided to use, also has a guidance system that makes the landing approach easier for pilots.

During the final approach, the tower reported winds gusting at up to 47 knots. The gusts were stronger than the prescribed limit for an A320 -- the so-called "maximum crosswind demonstrated for landing." Taking off again would have been appropriate. But the instructions provided in the manuals offered conflicting information, according to the agency. "We asked 80 pilots how they would have interpreted the instructions," Reuss said. "In fact, there were many different interpretations."

In its report, BFU describes an "insufficient definition and explanation in the flight operations and technical documentation for the operation of the aircraft." The agency said the "strong, gusting crosswind" had made for a "very dynamic situation calling for a high level of flying skill and airmanship." Still, the experts said the wind conditions were "not unusual."

Airbus spokesman Schaffrath noted that the Hamburg incident was the first to happen with any of the 4,200 aircraft in the A320 fleet, which has been in operation for over 20 years and has clocked up over 80 million flying hours.

But both Lufthansa and, especially, Airbus, have their work cut out for them. BFU has ordered the Toulouse, France-based aircraft company to revise its flight documentation to include descriptions that are "uniform, clear and understandable without any contradictions." It also called for improvements to Airbus's flight computers.

Asked what steps the company would take, Lufthansa spokesman Michael Lamberty told SPIEGEL ONLINE, "We already revised our instructions for landing approaches in conditions with strong crosswinds a year ago." Lufthansa said the investigative report backed the assessment of the German airline that the cockpit crew had handled the difficult landing appropriately. 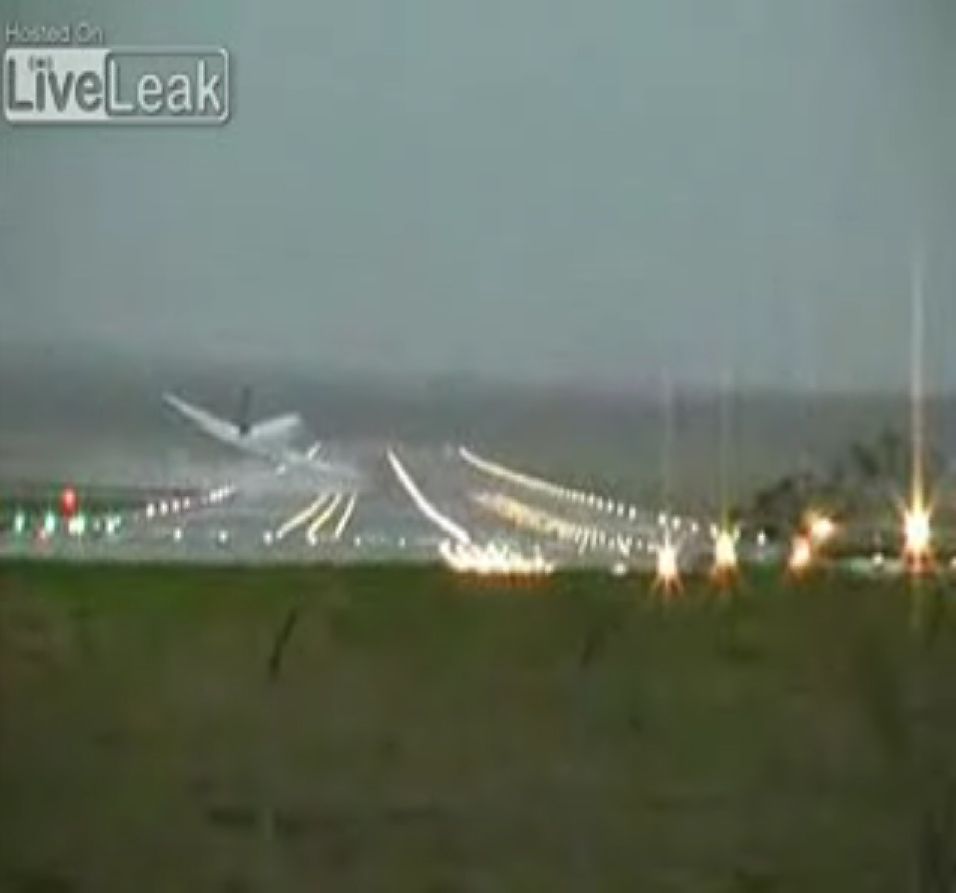 A video still of the 2008 near crash of a Lufthansa Airbus A320 jet near Hamburg.