It's a day that took decades to arrive. One of the jewels of Berlin's Museum Island complex will reopen its doors. The Neues Museum reopens on Friday, meaning that the entire ensemble of Berlin's neoclassical galleries will be open for the first time since World War II.

"It is a special day ... 70 years after it was closed, this building can be handed over to the public again," Hermann Parzinger, the head of the Prussian Cultural Heritage Foundation, which oversees Berlin's museums, told journalists ahead of the opening of the galleries, which will hold the city's Egyptian Museum and the Museum of Pre- and Early History. "It is, in a way, the end of the postwar era for the Museum Island." 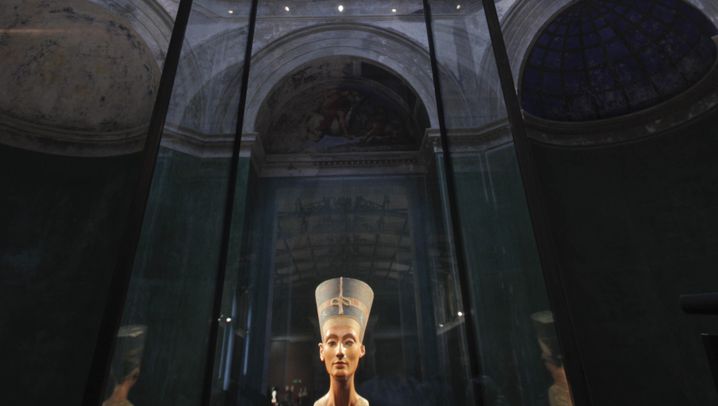 The star of the show will be the limestone-and-stucco bust of Nefertiti, which has been in Germany since 1913. Reflecting her status in the world of art history, the beautiful object will reside alone in a dome-ceilinged room which overlooks the length of the museum.

The museum has been closed since the beginning of the war in 1939, when its artifacts were taken into storage. Situated in the former East Germany, it was left in its war-torn state due to lack of funds. Nefertiti and thousands of other items have now been returned to their former home for the first time.

Alongside the historic artifacts, the space also houses a stretch of barbed wire from the Berlin Wall, a timely addition given next month's 20-year anniversary of the fall of the east-west divide.

And the neoclassical architecture, recognized as a UNESCO world heritage site, has been lent a modernist touch by British architect David Chipperfield. His painstaking €233-million ($347 million) revamp has sparked controversy by leaving some of the historic decay untouched. White modern stairways sweep past old bricks pocked by bullets in World War II, original columns still have fire damage and neo-classical mosaics and pseudo-Egyptian murals still seem to flake away on ceilings and walls.

The high-profile opening has also reignited an ongoing row about the museum's centerpiece, with Egyptian antiquities chief Zahi Hawass telling a number of German newspapers that Nefertiti belongs to his country. Speaking to the Kölner Stadt-Anzeiger, Hawass said an official investigation had been launched into how Nefertiti came to Germany. "If she left Egypt illegally, which I am convinced she did, then I will officially demand it back from Germany," he told the daily.

At the press conference ahead of the opening, Parzinger said any relevant documents would be given to the Egyptian authorities. He stressed he was "confident" Nefertiti's place in Berlin was secure.

This weekend Nefertiti's steely gaze will be the major draw for Berliners who are expected to flock to the public opening. The Neues Museum will be free for visitors on Saturday and Sunday. Organizers are braced for a mass turnout, providing hot drinks for the thousands expected to stand in line, despite the forecast of rain.