The police presence providing security for the city-council meeting was intense. Outside, the neo-Nazis were waiting -- but so too were many of their enraged opponents. The small town of Kirchheim an der Weinstrasse, not far from the Rhine River in western Germany, had to decide earlier this summer whether it was going to cough up the dough necessary to buy a small, failing bar at the edge of town. Some 800 signatures from concerned citizens -- almost half the population -- had signed a petition urging it to do so.

And it wasn't because the good citizens of Kirchheim an der Weinstrasse thought the town should go into the business of selling cocktails and beer. Rather, a group of neo-Nazis had offered to buy the down-at-the-heels establishment for the seemingly inflated price of €790,000. They said they were going to turn it into a training center for the far right NPD party -- an extremist party with neo-Nazi ties.

But the local politicians kept their heads. With a vote of 14 to 3 just over two weeks ago, the town council elected not to buy the piece of real estate. And oddly, the decision didn't make either of the groups of demonstrators terribly happy. Those gathered to protest neo-Nazi presence in Kirchheim an der Weinstrasse immediately warned that hordes of right extremists could invade the idyllic town.

And the neo-Nazis? They were more concerned with figuring out how to back out of their commitment to buy the ramshackle building. Despite having made an offer, the bar was much more than the right-extremists could afford.

It's a game that has been repeated across Germany in recent months and years: The radical right announce that they are preparing to buy some piece of real estate to establish a training center or right-wing convention hall; the locals take to the streets to protest against the plan; and local politicians then do what they can to buy the over-priced properties before the neo-Nazis can. It's a game that is currently being played in the town of Delmenhorst, located not far from Bremen in northern Germany. Residents there have collected almost €1 million in an effort to prevent neo-Nazis from buying a hotel located right in the center of the town.

But German domestic intelligence officials see a disturbing pattern emerging. They warn that often, the neo-Nazis are only feigning interest in the properties in order to drive the price up. The result is more money for the property owner and -- as part of the deal -- more money in the party's treasury.

The pattern is always the same. Once the right extremists have found a likely property, they do everything they can to be indiscrete. Most often, they send out well-known activists from the brown scene to make sure their intentions are well publicized. In the case of Kirchheim an der Weinstrasse, it was Uwe Meenen, local NPD party leader and part of a group that would like to see the creation of the "Fourth Reich."

According to the owner of the bar, Volker J, the radicals at first offered as much as €900,000 for the "Alte Mühle" -- which had been listed for sale on the Internet for years. But then someone set the roof of the building on fire and Meenen, according to a notarized contract, bought the property -- now partially covered by a blue tarp -- for €790,000. The town could have used its right of first refusal to block the deal and buy the property itself. But Mayor Ingrid Rehg elected not to. "I think they are trying to extort us," she said.

The mayor, a member of the center-left Social Democratic Party (SPD), says she'll never forget the day the neo-Nazis arrived in her village. It was January 14, and the NPD passed out flyers inviting locals to swing by the Alte Mühle for a meal of baked potatoes. The party flag was flying in front of the bar and there were xenophobic posters hanging on the wall next to the front door. The village was in an uproar.

Driving the prices up

"We're afraid for our children," frets a spokeswoman for a group of concerned citizens. Vintners are concerned that guests will disappear once Kirchheim becomes associated with the neo-Nazis. But despite the pressure, the town council didn't even come up with the €440,000 that an official appraisal said the property was worth. "If we give in now, they'll come again tomorrow and make an offer for the next building in the village," Rehg says.

The mayor isn't alone with her concerns. Even the interior minister of the state of Rhineland Palatinate, Karl Peter Bruch -- likewise with the SPD -- has warned against naively falling into the neo-Nazi's trap. Bruch sent one of his advisors, Roger Lewentz, to Kirchheim to assist the town council in making its decision. Along with him, Lewentz brought a report prepared by German domestic intelligence officials that made it rather clear that the NPD -- and especially Uwe Meenen -- could never afford the building's purchase price. Just last year, Meenen himself testified before a court that his income is hardly more than that of a social security recipient. 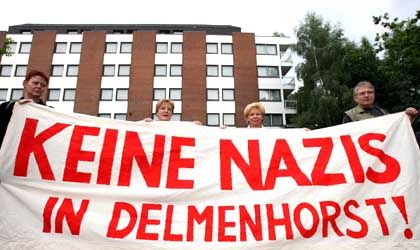 Delmenhorst has been demonstrating for weeks against a neo-Nazi plan to buy a hotel in the town center.

Despite his lack of income, though, Meenen has more than once posed as a neo-Nazi real estate investor -- often with expensive consequences for the town councils concerned. In the spring of 2005, for example, he issued a press release saying he was planning on creating a "National Center" in a former tennis hall in Grafenwöhr, not far from Nuremberg in southern Germany. He had just purchased the building, he said, for €545,000. Horrified, the city council immediately blocked the sale by buying the building at the price Meenen had negotiated.

Perhaps unsurprisingly, it wasn't the best deal the town had ever made. Grafenwöhr is still in the process of paying for a €250,000 modernization. "We're not happy about how the deal played out," the deputy mayor Gerald Morgenstern says. "It was surely a type of extortion."

The tennis hall's seller, Wolfgang Jürgens from Dresden, on the other hand, is ecstatic with the result. "I should have asked an additional €100,000," he says. The involvement of right extremists, he says, "is an excellent method of applying pressure. He's now threatening to sell a further tennis hall -- located in Dresden -- to a group of right wingers.

In the Bavarian town of Cham, the town council learned this April that Meenen was planning on paying €1.2 million for an empty complex once containing a supermarket and a disco. Immediately, 7,000 townsfolk took to the streets to protest against the announced plan of turning the buildings into a "nationalist training center." The town succumbed to the pressure and bought the complex itself.

Virtually the same thing happened to the town of Hirschstein in Saxony -- the town borrowed €198,000 to buy a rundown inn within which local NPD functionaries allegedly wanted to start a "training center." And in Rhineland Palatinate, a local bank jumped in to buy both a bar and a former swinger club that neo-Nazis were apparently interested in.

Bruch, the state's interior minister, does see a risk that at some point, the right extremists won't actually be bluffing. But as a rule, it looks as though property sellers could be working hand in hand with the neo-Nazis: The purchase price is driven up by the fear of having right-wingers in the neighborhood and the profit is then split between them.

The assumption is hardly far-fetched. The local NPD cell in the eastern German city of Jena even offers the service to real-estate speculators on its Web page. "For a donation to our party," the site reads, "we will provide a written guarantee that interest in your piece of real estate will rise." Property owners, the site claims, will have an excellent chance that their realty will be bought by the city at a premium price.

Cat and mouse with the neo-Nazis

The current situation in Delmenhorst shows just how difficult it can be for members of a town council to resist the pressure to buy. In late July, Mayor Carsten Schwettmann went public with right-extremist Jürgen Rieger's interest in buying an empty 192-bed hotel in the center of the city for €3.4 million. Rieger intended, it was said, to create a right-wing convention center. Since then, the city has been obsessed by the prospect and demonstrations against the "Nazi School" have become an almost daily occurrence.

Concerned citizens created an account where donations could be collected -- with the intention of raising enough money to buy the hotel itself. As of Friday, €790,000 had been collected and the organizers are now asking the city to come up with the rest of the €3.4 million asking price -- even though the building itself is worth far less than that.

Mayor Schwettmann has taken the step of assuring the hotel owner Günter Mergel that the city is interested. Still, it seems obvious that Mergel is in cahoots with Rieger, a lawyer in Hamburg who often represents prominent neo-Nazis. First Mersel says he has reached an agreement with Rieger, and then he says he wants to continue negotiations with the city. First he speaks of an approaching closure date, and then it's postponed yet again. The game of cat and mouse has been continuing for days.

This particular case, say officials in Lower Saxony -- the state where Delmenhorst is located -- is a bit different from those that have come before. Rieger likely has enough money to buy the hotel. But Delmenhorst is hardly a center for the right wing, officials say. It would prove difficult to attract many events to the site.

Tens of thousands in legal fees

Plus, Rieger admits to having played this game before. Two years ago, an NPD member expressed interest in buying a building in the Lower Saxony village of Verden -- as an agent of Rieger's. Immediately, a citizens' group collected €230,000 and bought the building with the support of the town. "Of course I never wanted the hall," Rieger said later. "We were angry with the building authority and we wanted to antagonize the town of Verden."

In 1999, Rieger bought a run-down cinema in Hameln -- home of the Pied Piper -- with the intention of providing a venue for skinhead and right-wing concerts. But the town never coughed up the necessary permits, claiming the building didn't conform to the fire code. Rieger is now trying to get rid of the building -- it has been listed on Ebay for weeks now.

Indeed, setting up such bureaucratic hurdles now appears to be one of the best methods for countering the plans of the neo-Nazis. Back in Kirchheim, authorities declared the "Alte Mühle" a historical monument, meaning no changes whatsoever can be made to its appearance. Even the head of Rhineland Palatinate's NPD party, Peter Marx, admits that the strategy is an effective one. A number of the project's "sponsors," as Marx calls them, are no longer interested. The contract is to be annulled this week.

Which could turn into a problem for Meenen. After all, he's the one who signed the contract in the first place -- and he could be required to pay tens of thousands in legal fees. This time, though, it won't be just a game.