The mayor of the small town of Warin in eastern Germany has gone into hiding after a threat against him appeared on a far-right Web site.

Hans-Peter Gossel, 53, has been under police protection for a week after the following entry appeared on Altermedia, a Web site popular with neo-Nazis: "Watch out!!! It's high time for Lebkuchen cake knives!! The next 'victim' is making himself available! Gossel?" Gossel said the Web site also contained a video showing a matchstick man being cut up with a knife. 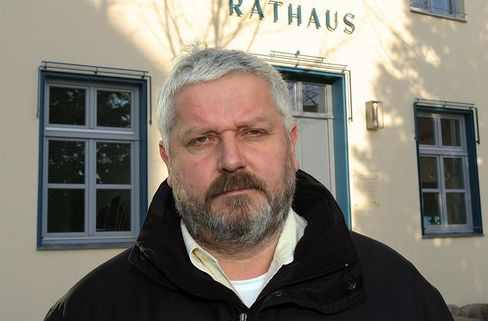 Hans-Peter Gossel, the mayor of Warin, has gone into hiding.

The message appears to have been in reference to the near-fatal stabbing of the police chief of the southern city of Passau, Alois Mannichl, two weeks ago by a suspected neo-Nazi. Mannichl was stabbed in the stomach at his front door and survived after emergency surgery. His attacker is still at-large.

A spokesman for the police in the city of Schwerin, which is responsible for Gossel's protection, said: "We are treating this as a serious threat that refers directly to the attack on Mannichl."

"I was shocked," Gossel told SPIEGEL ONLINE. He said he wanted to spend the next few days away from Warin and would visit friends.

The threat may be linked to a dispute between Gossel and the obscure Interim Partei Deutschland (IPD) party, which Germany's domestic intelligence agency says has links with right-wing extremism. The agency has been monitoring the IPD for some time. The party rejects the legitimacy of the Federal Republic of Germany, and its chairman, Edgar Romano Ludowici, has described himself as "Reich interior minister of the exile government of the Second German Reich in the borders of 1937."

Gossel criticized the IPD after it purchased a house in Warin last summer. He also campaigned against the party's setting up offices in the town because he was worried it would use the property as a training center.

The attack on Passau's police chief has raised fears that Germany's far-right scene is becoming more brazen -- and violent. Recent figures show that the number of far-right crimes committed in the first 10 months of 2008 exceeded the total for the whole of last year. A report in Frankfurter Rundschau newspaper last week said the German intererior ministry had registered 11,928 such crimes by the end of October, a rise of almost 30 percent relative to the same time period last year and exceeding all of 2007's total of 9,206 crimes. The final figures will be released in early 2009.

Separately, the small Bavarian town of Gräfenberg says it is being terrorized by neo-Nazis from outside town who have been staging demonstrations there for the past two years.

The next such rally was set for Wednesday, New Year's Eve, but was prohibited by the regional authority which said it would be too dangerous for the demonstrators given all the New Year's fireworks in circulation.

The far-right protestors have been offered an alternative date of January 10 for their march. That would be the 35th neo-Nazi demonstration in the town since November 2006. The town council is involved in a protracted dispute with far-right campaigners because it has refused them access to a local war memorial.

For the past two years, demonstrators wearing combat boots, many with their faces concealed by hoods, scarves or sunglasses, have regularly marched through Gräfenberg holding burning torches and beating drums in menacing scenes that evoke Nazi-era rallies.

A local citizen's group co-founded by Gräfenberg Mayor Werner Wolf has made headlines by waging a colorful campaign to counter the far-right protestors, for example, by playing loud Samba music and running deafening motorized saws to drown out their speeches.

Mayor Wolf said last month that, in recent years, he and other members of the Citizen's Forum organizing the counter-demonstrations had received anonymous threats.

He received an e-mail, for example, stating that "those who fight us must expect to get hurt," and he had a bag of paint hurled at his house. The names and photos of fellow campaigners had been published on far-right leaflets, said Wolf, and demonstrations had been held in front of their homes.