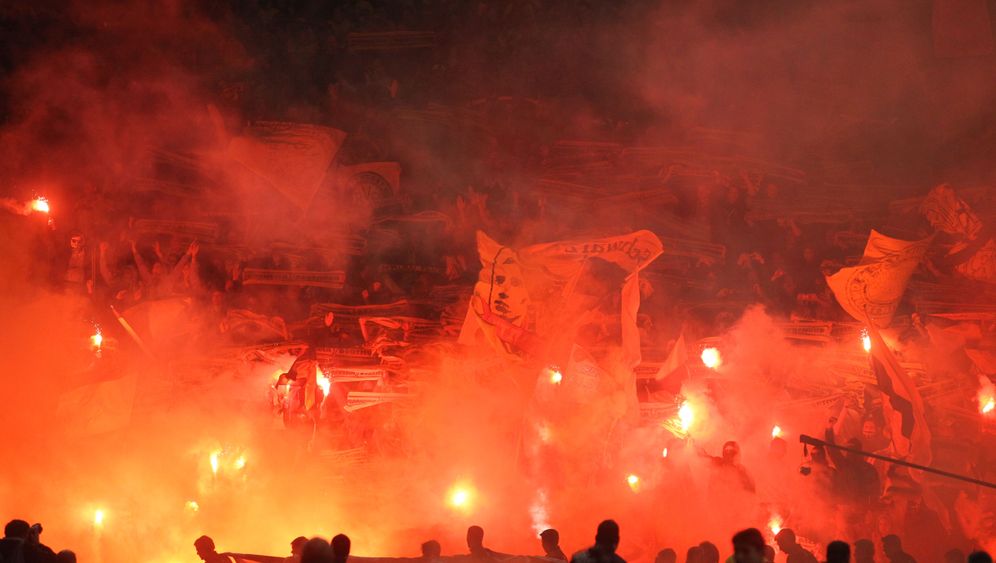 As if by command, the men put on black balaclavas and start marching. They are young, some are wearing shorts and they are carrying plastic clubs.

Borussia Dortmund is playing against Schalke 04. It's the half-time break. A police detail is positioned behind the south stands to protect the Schalke fans. The officers see the men, fanatical Borussia fans known as "ultras," coming toward them. Then the attackers lunge at the police and start hitting them with their clubs. Bottles fly, and innocent fans waiting at concession stands flee in panic.

More ultras join in from the south stands, and before long the officers are facing a mob of some 200 thugs. The police fall back, striking at the out-of-control fans with their batons.

As the air becomes filled with the pepper spray being used by the police, one of the ultras shouts: "Just breathe through your mouth, not your nose." A beer keg comes flying through the air.

Within a few minutes, the commotion is over. The match resumes. The police withdraw, and all that's left is a large puddle of blood.

Three days after the match, Thilo Danielsmeyer of the Dortmund Fan Project rides his bike to the Strobels stadium pub. The newspapers are full of reports about the riots at the Schalke match on Oct. 20, which led to 180 arrests and 11 injuries. It was the worst rioting Dortmund had seen in years. Danielsmeyer has also heard about the attack on the police beneath the south stands, and he's incredulous. "Those were our boys!" he exclaims.

The Fan Project is located in downtown Dortmund, a city in western Germany. It has a staff of four full-time social workers and an annual budget of €180,000 ($231,000). Funding comes from the city, the state of North Rhine-Westphalia and the German Football League. "Our job is to support young fans, and to bring those who have fallen by the wayside back to the center of society," says Danielsmeyer.

In 1999, an ultra group called the Desperados was formed under the auspices of the Fan Project. The members, ordinary young men, many of them teenagers, designed a logo and painted signs. The Fan Project was their base. But over the years the Desperados showed up with decreasing frequency, and eventually there was almost no contact at all with many in the group.

The Desperados have about 150 members today. At police headquarters in Dortmund, two phrases come to Chief Detective Walter Kemper's mind when he thinks about the Desperados: "receptive to right-wing ideology" and "prepared to use violence."

There was a trial in September after neo-Nazis had hunted down a group of left-wing, alternative youth. A member of the Desperados was one of the defendants. As they ran toward the police officers beneath the south stands during the Schalke match, one of the Desperados shouted: "We'll kill you, you goddamned pigs!"

Something has gone wrong, says Danielsmeyer.

Foothold in the South Stands

Borussia Dortmund has been a success story in recent years and has had plenty of reasons to celebrate. It won the German national league championship twice in a row, and last year it also won the primary cup competition. But during the course of its dizzying ascent, the club, almost bankrupt eight years ago, lost sight of its fans.

The Desperados always stand in the same spot in the south stands, dressed in their typical ultra outfits: dark hooded sweatshirts, baseball caps and sunglasses. A sign with a homophobic slur turned up in their section a few months ago.

The club was very upset about the incident, but it didn't make much of a fuss about it. In August, during a match against Werder Bremen, a banner appeared in the south stands that read: "Solidarity with the NWDO." NWDO is the abbreviation for National Resistance Dortmund, a neo-Nazi organization that Ralf Jäger, the state interior minister, had banned a short time earlier.

Borussia management has been on edge ever since.

Right-wing propagandists have gained a foothold on the "Süd," or south stands, the home of the champion team's fans. They have latched onto the ultras, or extreme fans, hoping to recruit new members within the group.

Only now has the club begun to show some resistance. "We have to cut the ground from under their feet," says Borussia Managing Director Hans-Joachim Watzke. He isn't quite sure how to go about it yet, though.

Dortmund is a football city, but it's also a stronghold for right-wing extremists. In 2000, neo-Nazi Michael Berger shot and killed three police officers in Dortmund and nearby Waltrop, before turning the gun on himself. Dortmund reported the largest number of crimes committed by right-wing extremists in the state of North Rhine-Westphalia: 131 in the first half of 2012. The aid organization Back Up currently attends to the needs of 30 victims of right-wing extremist violence in Dortmund.

There are neo-Nazi residential communities near the university. Oberdorstfeld, a former miners' district, is now home to entire skinhead neighborhoods, seemingly idyllic with their playgrounds and flowerbeds graced with garden gnomes.

The neo-Nazis who have spread through the fan community call themselves Autonomous Nationalists (AN), a group operating with almost no fixed organizational structure. They have a strong presence in Dortmund, and they also constitute the core of the NWDO.

Autonomous Nationalists are not drunken neo-Nazis in combat boots, and instead dress like ordinary ultras. The head of the group, a young father, doesn't drink or smoke, and he has his underlings refer to him as "Führer." The group includes students and an employee of an advertising agency. A few of the Autonomous Nationalists are currently going to night school to obtain their high-school diplomas.

Law enforcement officials refer to AN members as "the clever ones." Watzke says: "They seem to appeal to the occasional adolescent." Between 10 and 30 AN members typically converge on the "Süd" at a match. Some have season passes, while others get tickets from friends or scalpers.

It May Already Be Too Late for Officials to Reverse Course

They have made deep inroads into the ultra community. It wasn't difficult, says Markus K., who was active with the Autonomous Nationalists in Dortmund until a few months ago. Ultras also see themselves as an avant-garde, they like to organize themselves in groups, and they have a capo, or leader, who tells them what to chant. "It's a culture that's compatible with the neo-Nazis," says K.

The neo-Nazis have established the strongest ties to the Desperados and a group called Northside. Now that the soccer hooligans have become connected to the neo-Nazis, they sometimes end their rampages by shouting "Sieg Heil."

The three groups support one another and appear in public together during fan trips. Desperados attended a neo-Nazi rally in eastern Westphalia in the summer, diligently handing out flyers.

Sometimes the groups also do other things together, such as when they recently went to a free fighting event at a boxing club in an industrial part of the city of Witten. One of the Northside ultras was featured in the event. The men had skipped an away game in Freiburg for the event.

It was a great evening for the right-wing extremists. A man who goes by the name "NS (Nazi) Paul" sat in the audience, wearing a BVB jersey, next to a few members of the Bandidos biker gang. Actor Ralf Richter, a legend in the industrial Ruhr region, was the ring announcer. Although the Northside man lost the fight, he was still greeted with applause from his friends.

North Rhine-Westphalia Interior Minister Jäger, a Social Democrat, has since declared war on the neo-Nazis. A 50-member special commission was appointed to observe the right-wing extremists while they shop, sit next to them in bars, pay them visits at work and search their apartments.

The government agents also keep an eye on the south stands at the Borussia Dortmund stadium. At matches, they observe the area where the ultras stand from the main stands, using a €400,000 high-resolution camera. But they haven't managed to get the picture fully into focus yet, unable to pinpoint any evidence of offences that would justify imposing a stadium ban.

Jan M., a thin but thoroughly fit man, is sitting in the Biedermaier pub in Dortmund's Kreuzviertel neighborhood. M., who is in his early 30s, was a member of the Desperados -- one of the group's leaders, in fact. He was kicked out this year after being accused of passing on information to the police. The Desperados are not a rigidly right-wing group, he says, "but they have no problem with having right-wingers in their midst."

In the beginning, the Desperados were seen as weaklings in the ultra community. They were young and inexperienced. Their flags and football scarves were constantly being stolen, which is very humiliating for ultras.

They got in touch with the muscular Northside hooligans, who had always known how to defend themselves, and got martial arts training. The Tremonia Club was established to gain access to gymnasiums. At a school gymnasium in Lütgendortmund, the ultras received regular training in the Brazilian martial art Luta Livre. They also used steroids and amphetamines to build muscle even faster.

Older hooligans with the Borussenfront, a group of thugs founded in the 1980s and led by neo-Nazi Siegfried Borchardt, came to the training sessions, as did many Autonomous Nationalists. The groups became friendly and ended up going to bars together after the martial arts sessions.

"Some liked the right-wing music, while others were turned on by the clothes or the radicalism," says Jan M. "If you felt that you had something in common with them, it wasn't a great leap to become one of them."

About 100 ultras in the south stands now have right-wing sympathies. They are becoming more and more aggressive. This summer, members of the Desperados and Northside groups began intimidating other ultras in the section, first with threats and then with slaps.

Borussia's biggest group of extreme fans is Unity, which counts about 250 apolitical members. They are seen as the reasonable ones, and they meet regularly with club officials, sometimes in Watzke's office.

The right-wing ultras see the Unity members are sissies and deliberately terrorize them. One of their methods is to make "house calls." Unity ultras are ambushed in front of their apartments, and in two cases "targets" were attacked at night in their apartments, where they were dragged out of bed and beaten.

No charges were filed in any of these cases. Ultras don't cooperate with government officials.

The Desperados and Northside now run the show in the ultra section. When the police were attacked during the Schalke match, a number of Unity members were even convinced to go along with the right-wing thugs.

"Now we have to protect the reasonable ones," says club director Watzke. He has hired two additional fan managers. The club plans to organize preventive events, and a specialist in fan culture was hired to design new concepts.

Watzke also had the stadium rules changed so that individuals who are "not acting on the basis of the liberal-democratic constitutional order" can be tossed out.

But there is still a great deal of anxiety in the fan section. Stadium security officers recently shouted at supporters of a visiting team, calling them names like "wog," "fag" and "Jew," and insulting women with sexist remarks.

Some now believe that the right-wing extremists have infiltrated stadium security at the Dortmund arena. Some of the security guards are former Desperados. 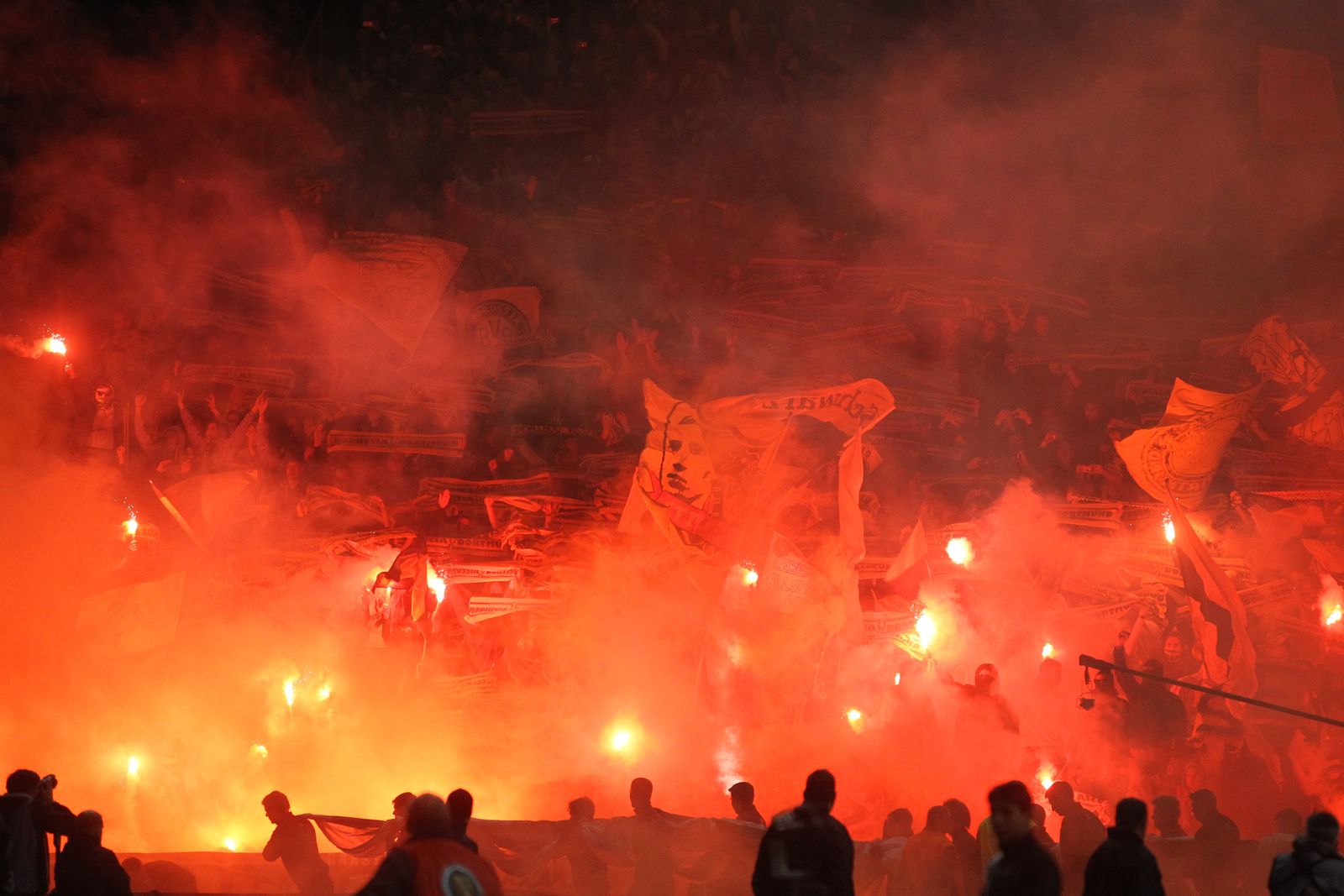 Neo-Nazis have been infiltrating the hardcore fanbase of German football team Borussia Dortmund and causing violence during matches.