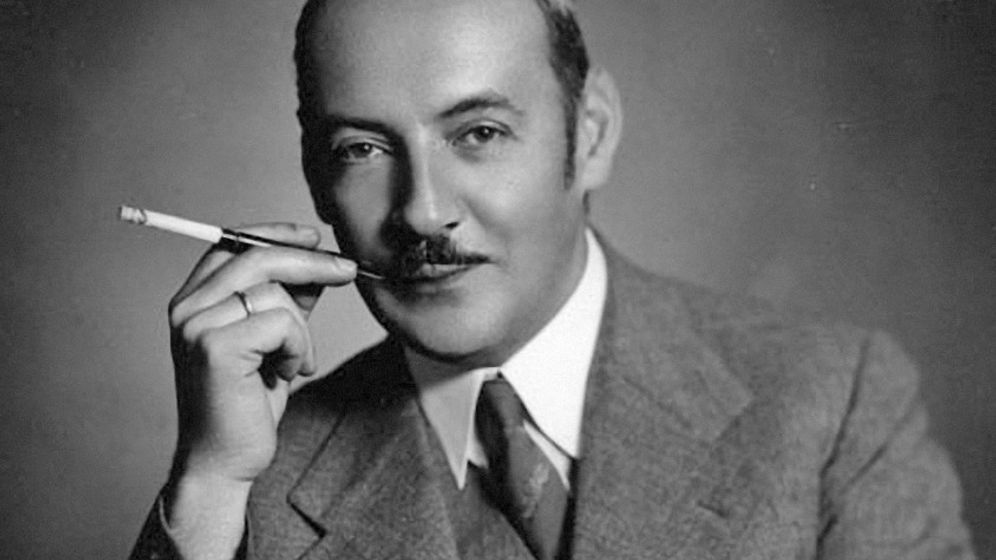 In downtown Vienna under the Nazis, two members of the SA had decided to humiliate an old woman. A crowd gathered and jeered as the stormtroopers hung a sign bearing the words "I'm a dirty Jew" around the woman's neck. Suddenly, a tall man with a high forehead and thick mustache pushed his way angrily through the mob and freed the woman. "There was a scuffle with two stormtroopers, I hit them and was arrested immediately," the man later said in a matter-of-fact statement.

Despite this open act of rebellion, the man was released immediately. He only had to say his name: Albert Göring, brother of Hermann Göring, the commander of the German air force and Hitler's closest confidant.

Years later, after the fall of the Third Reich, Albert Göring was arrested once again, this time by Americans. Again he gave his name, but this time it had the opposite effect.

"The results of the interrogation of Albert Göring … constitutes as clever a piece of rationalization and 'white wash' as the SAIC (Seventh Army Interrogation Center) has ever seen," American investigator Paul Kubala wrote on September 19, 1945. "Albert's lack of subtlety is matched only by the bulk of his obese brother."

Kubala's interpreter, Richard Sonnenfeldt, was likewise skeptical. "Albert told a fascinating story, but one I had trouble believing," he commented.

A Member of the Resistance?

The life of Hermann Göring's younger brother indeed makes a fascinating story, one that has remained essentially unknown in the nearly seven decades since the end of the Nazi dictatorship. Perhaps it's because today many have the same reaction that the American investigators had then: Can it really be possible that Hermann Göring's brother was a member of the resistance? A caring person who saved Jews, helped dozens of persecuted individuals obtain foreign currency and fake papers, and even secured the release of concentration camp prisoners?

"It has been four months now since I was robbed of my freedom, without knowing why," Albert Göring wrote in September 1945 in a heavy-hearted letter to his wife. He had turned himself over to the Americans voluntarily on May 9, 1945. After spending years trying to thwart his brother's policies in various small ways, now he felt betrayed.

So he took up a pen and paper and wrote an alphabetical list of 34 names, entitling it "People whose life or existence I put myself at risk (three Gestapo arrest warrants!) to save."

For decades, that list and the few other existing documents on Albert Göring sat in archives, gathering dust. Hermann Göring's life was examined down to the last detail, from his morphine addiction and his role as an art thief to his actions as Reichsjägermeister, or official gamekeeper. Albert Göring, meanwhile, sank into oblivion.

In the end, it was journalists rather than noted historians who first introduced the younger brother to a wider public. In 1998, a British film crew shot a documentary called "The Real Albert Göring." In far away Sydney, William Hastings Burke, then 18, stumbled across the film and developed a long-lasting fascination with the story. "The idea that this monster we learn about in history class could have had an Oskar Schindler for a brother seemed absolutely unbelievable," Burke later wrote.

After completing a university degree in economics, Burke scraped together the money for a ticket to Germany. He found a room in a shared apartment in the university town of Freiburg, got a job in an Irish pub, and otherwise devoted the next three years to searching for Albert Göring, combing through archives and meeting with friends and family members of people Albert Göring was said to have helped. The result was "Thirty Four," a book named after Albert Göring's list, published in 2009. The German translation will be released in German on May 21 under the title "Hermanns Bruder: Wer war Albert Göring?" or "Hermann's Brother: Who was Albert Göring?"

Burke's book describes a man who could not have been more different from his infamous brother. "He was always the exact opposite of me," Hermann said in a statement after the war. "He wasn't interested in politics or the military, and I was. He was quiet and withdrawn, I loved gatherings and being sociable. He was melancholy and pessimistic, I'm an optimist."

In appearance as well, the brothers' differences were so striking that even early in their lives, rumors flew that Albert was in truth the result of an affair on the part of their mother, Franziska. Hermann had blue eyes, Albert had brown. Hermann was stocky and fat, Albert tall and slim. Hermann loved authoritarian, bombastic behavior, while Albert was a bon vivant -- musical, cultured and charming. He was also a ladies' man who married four times and was said to be always up for a fling.

At first, Albert simply tried to keep out of the National Socialists' way. A mechanical engineer, he chose not to join the Nazi Party, instead moving to Vienna, Austria in 1928 to work as sales manager for a company that made heating boilers. He also took on Austrian citizenship. But the world-power politics Albert so hated, and which his ambitious brother promoted, caught up with him there with the 1938 annexation of Austria to Nazi Germany.

At some point, Albert decided he wanted to help instead of turning a blind eye. For example, he helped Oskar Pilzer, former president of Tobis-Sascha-Filmindustrie, Austria's largest film production company. Pilzer was Jewish, which gave the Nazis the perfect excuse to ban his studios' films in Germany -- so they could subsequently take over the company when it began to falter. When the Gestapo arrested the toppled film mogul in March 1938, Albert Göring intervened.

Scrubbing the Streets in Solidarity

"Albert Göring used the power of his family name and pulled out all the stops, first to find out where my father was and then to make sure he was released immediately," Pilzer's son George later testified.

That was no isolated incident, and many people had similar testimony to present after 1945. Alexandra Otzop, for example, recalled, "My husband and his son from his first marriage were persecuted in the fall of 1939. Mr. Göring managed to get them deported, instead of being sent to a concentration camp."

It's said that Albert Göring once even got down on his hands and knees to scrub a street in Vienna, out of solidarity with women who were being bullied by stormtroopers. The women's tormentors asked his name and were horrified by the answer.

While his brother was hard at work perfecting his air force, Albert obtained fake papers, warned friends of impending arrests and provided refugees with money. Again and again, he deftly used his name to intimidate public officials.

It was a bizarre situation. The overly ambitious Hermann knew about Albert's activities, yet did nothing to stop him. Albert later testified that his brother had told him it was his "own business" if he wanted to protect Jews, so long as he didn't get Hermann in "endless trouble." Albert, meanwhile, had a nearly schizophrenic relationship with Hermann, trying to keep the private person and the politician separate. "As brothers, we were close," he said.

But as time passed, Albert Göring abandoned the caution his brother had demanded of him. In late 1939, the younger Göring himself took an influential position, becoming export manager for the Skoda automobile factory in the Czech city of Brno. From this position, he also supported the Czech resistance, activists later testified. If their statements are accurate, Albert Göring revealed not only "the exact location of a submarine dockyard" but also the plan to break the non-aggression pact with the Soviet Union. This sensitive information, the Czech resistance fighters stated, was successfully passed on to Moscow and London.

But even that isn't the whole story. Göring is also believed to have saved prisoners from the Theresienstadt concentration camp in 1944. "He said, I'm Albert Göring from Skoda. I need workers," Jacques Benbassat, the son of an associate of Albert's, later related. "He filled the truck with workers, and the concentration camp director agreed to it, because he was Albert Göring. Then he drove into the woods and released them."

A number of notes turn up in German files that prove these stories were not simply made up. The Gestapo's Prague bureau, for example, complained that Göring's office at the Skoda factory was "a veritable nerve center for 'poor' Czechs." The general of the Prague police, SS-Obergruppenführer Karl Hermann Frank, considered Albert Göring "at the very least, a defeatist of the worst sort" and asked permission to arrest him in 1944 on "profound grounds for suspicion."

Now the man who had helped others escape became the persecuted one. Multiple times, Hermann Göring had to intervene on Albert's behalf, all the while warning him that he wouldn't do so forever -- with every German plane shot down, the once untouchable head of the Luftwaffe found his star was on the wane. Shortly before the end of the war, Albert fled to Salzburg, Austria.

These two very different men met just once more in an American detention center in Augsburg. "You will soon be free," the war criminal Göring is said to have told the younger Göring who saved Jews, on May 13, 1945. "So take care of my wife and my child. Farewell."

While Hermann Göring, sentenced in Nuremberg, escaped execution by committing suicide in October 1946, the Americans remained suspicious of Albert Göring. His name had become a burden for him. Although the last of a series of caseworkers did recommend his release, Göring was turned over to the Czech Republic and tried in Prague for possible war crimes, because Skoda had also manufactured weapons.

Only after many former Skoda employees testified on Göring's behalf were the charges dropped, and Göring was acquitted in March 1947. He died in 1966 in a Munich suburb, an impoverished and bitter man. Despite being a highly qualified engineer, he had been unable to find work in postwar Germany. Being Hermann Göring's brother, a fact that had saved his life in years past, ultimately became a curse.

This story originally appeared in German on SPIEGEL ONLINE's history portal, einestages.de. You can read the German version here.