What does a soldier do after his country has lost a war and he is left with nothing, has no education or vocational training, and no family and no friends? He remains a soldier.

On Nov. 21, 1918, 10 days after the armistice, lance corporal Adolf Hitler reported for duty at his regiment's garrison in Munich. He was given free rations, a monthly wage of about 40 Marks and a heated place to sleep, an important concession that winter.

Many years later, Hitler claimed that by the end of the war he had decided to become a politician. In truth, at the end of 1918 he wanted to remain a soldier for as long as possible. Another year and a half passed before Hitler had to leave the old military; it is the least-studied period in the life of the later dictator.

For decades, historians have tried to determine how a gaunt wannabe painter could turn into a murderous tyrant, and where the young Hitler received his most decisive influences. Was it in the Austrian city of Linz, where he grew up as the son of a violent customs official? In Vienna, where, as an unsuccessful artist, he spent most of the time between 1908 and 1913 living in a boarding house for men? Or during World War I, when he witnessed bodies being ripped to shreds on the Western Front?

Salzburg historian Othmar Plöckinger focuses on an entirely different period. "The decisive period that shaped Hitler's life," the academic concludes, "was his time in a military environment in Munich, from 1918 to 1920." That was where, according to Plöckinger, Hitler cemented his anti-Semitic worldview. It was where he became an anti-Bolshevik and where he had experiences "that he was later applied to his career as a propagandist and leader of the Nazi Party."

Plöckinger has compiled many good arguments to support his view of Hitler. As a member of an investigative commission in his regiment, the lance corporal learned how to fight political rivals. He attended anti-Bolshevik courses in which right-wing lecturers, who were hoping for an end to democracy in Germany, taught him the art of propaganda. And while working for the military, he also had opportunities to make a name for himself as a speaker to large audiences. In short Hitler, who had left school at the age of 16, acquired what amounted to a crash course, in "key competencies to lead a movement," as historian Plöckinger has discovered.

A Wave of Persecution

The political career of Hitler the soldier began in the spring of 1919, as the situation was escalating in Munich. On April 7, radical socialists proclaimed the Bavarian Soviet Republic and began forming a "Red Army" modeled after its Soviet counterpart. Most of the soldiers at Hitler's side refused to join the revolutionary troops. Although the Austrian lance corporal was elected to one of the soldiers' councils in his regiment, he remained a staunch opponent of the Bavarian Soviet Republic, as Plöckinger writes.

In early May 1919, after bloody fighting, German Reichswehr troops and right-wing militias occupied the Bavarian capital. Hundreds of sympathizers with the Soviet Republic were indiscriminately murdered. A wave of persecution gripped all of Munich.

Hitler, who had opposed the revolution, was now given the position of investigative commissioner in his regiment. As a former soldiers' council member, he was very familiar with the battalion. He helped compile lists of names, and he investigated the soldiers who had allegedly been in league with the Red Army.

In many cases, indictments were based on mere speculation and rumors. For example, Hitler's tribunal suspected August Klumpf, an officers' representative who was the same age as Hitler, of "promoting anti-government activities." In truth, however, Klumpf had rejected the Bavarian Soviet government. He was eventually rehabilitated.

Plöckinger traces how Hitler, as commissioner, first became familiar with an instrument of power that he would later use to eliminate his enemies: political cleansing. It enabled him to achieve absolute power, initially within the German Workers' Party (DAP), the forerunner of the Nazi Party. He gradually forced all of his former political allies who had dared to rebel against him out of the splinter party, which Hitler led to regional prominence.

Because Commissioner Hitler was considered politically reliable, in July 1919 his regiment sent him to an anti-Bolshevik training course held by the "Information and Propaganda Division" of the Bavarian Reichswehr Command. Karl Mayr, an anti-Semite, was the head of the division. Although the lectures Hitler attended had harmless-sounding titles like "Education and Politics" and "The Development of German Economic Life Since 1871," the lecturers were anti-Semites and anti-Bolsheviks hostile to the Weimar Republic.

On the surface, the military leadership sought to portray itself as politically neutral. In reality, it promoted ideas hostile to the republic within its own ranks. In August 1919 Hitler, as one of 26 "propagandists," was assigned to the Reichswehr's mobile "Information Command." He made many contacts and established relationships that, as he wrote in "Mein Kampf," formed the "foundation of the new movement."

In the Lechfeld transit camp Hitler, now an openly radical right-wing propagandist, gave talks to fellow soldiers who had returned from war captivity "contaminated with Bolshevik and Spartacist ideas." About 150 men listened to Hitler's remarks on "Conditions of Peace and Reconstruction" and on capitalism, in which he also addressed the "Jewish question." In Munich, he handed out the propaganda division's flyers to soldiers.

Hitler also wrote political pamphlets on subjects such as the "settlement question," as well as a letter in which he agitated against Judaism, which was "absolutely a race and not a religious community." He called for an anti-Semitism that had to lead "to the methodical legal control and elimination of the prerogatives of the Jew."

From Solider to Politician

From sources like these, historian Plöckinger concludes that Hitler's development into a racist fanatic was complete in the fall of 1919. His latent anti-Semitism had been transformed into a radical hatred of Jews.

In early September, Hitler's superiors sent him to the DAP -- as the military's henchman, Plöckinger writes. This suited Hitler well, because he could remain a soldier and thus continue to receive wages, food and lodging. In this way, the army facilitated his entry into politics.

Soon afterwards, journalists reported on the rising propagandists for the first time. On Feb. 22, 1920, the Donau Zeitung newspaper wrote that Hitler had, "in the form of simple family entertainment," given the Passau Citizens' Militia a "patriotic speech that was received with thunderous applause."

During those months, the army apparently only required the later dictator to perform menial work, as a librarian, for example. A "daily order" in Rifle Regiment 41 instructed the soldiers to borrow "reading material" from "Lance Corporal Hitler, room 564, third floor." 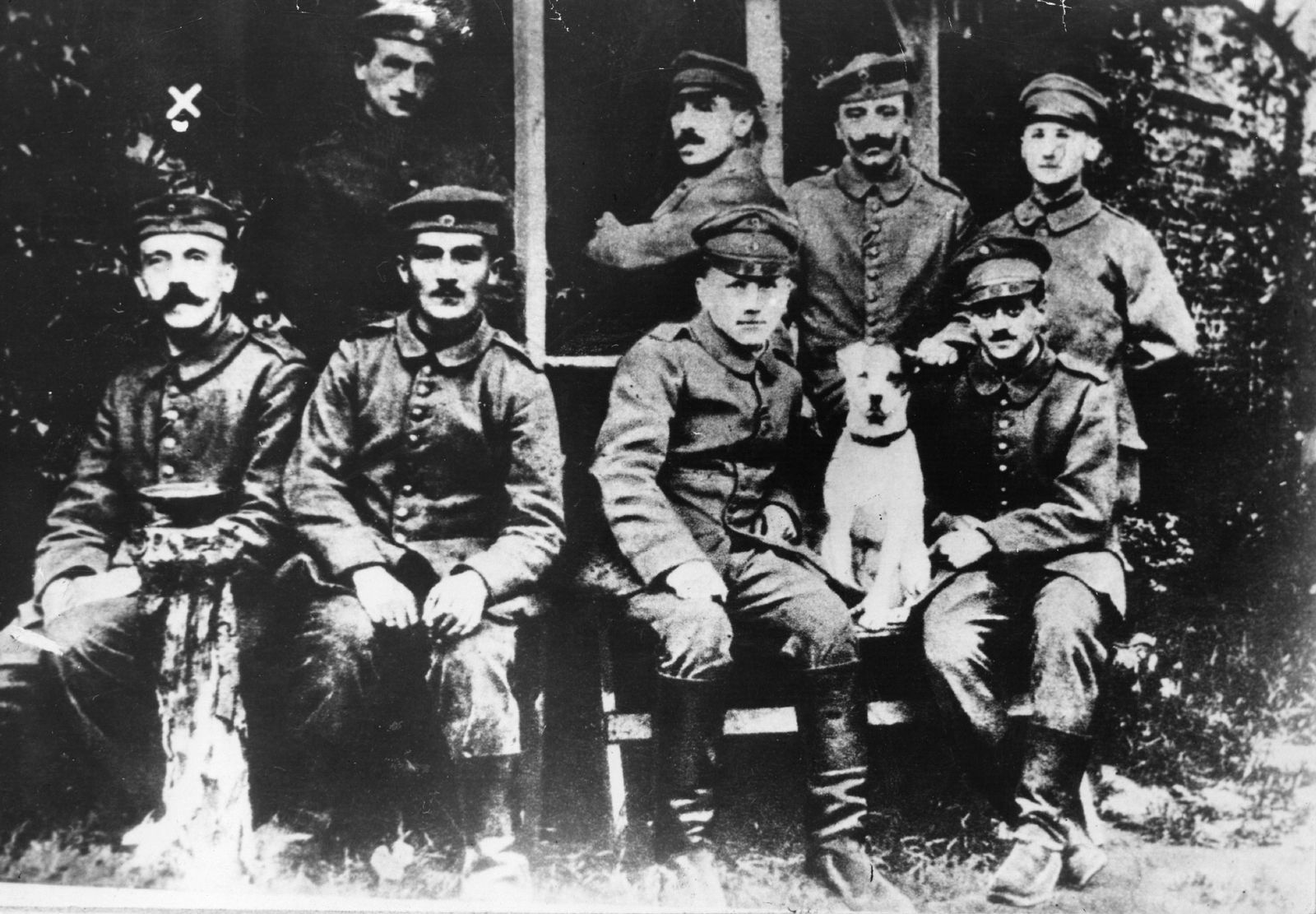 Lance Corporal Adolf Hilter with other soliders during the First World War.