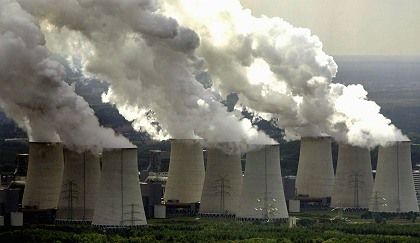 When it comes to tackling climate change, Germany's government seems to be making a serious effort. On Wednesday, the German cabinet signed off an ambitious package of measures, aimed at slashing the country's CO2 emissions by 40 percent relative to 1990s levels by 2020. German Environment Minister Sigmar Gabriel called the package, which reflects Germany's ambition to take a lead in the fight against climate change, "the largest worldwide."

On the same day the German cabinet was rubber-stamping the climate change measures, oil giant BP presented a report in Berlin that showed that energy consumption in Germany fell last year by a greater extent than in any other country in the world. According to the oil company's statistics, German companies and consumers slashed their use of so-called primary energy -- defined as energy generated by oil, gas, coal, nuclear and hydropower -- by 18.5 million tons of oil equivalent in 2007, a 5.6-percent reduction. Only Denmark and Azerbaijan recorded larger percentage reductions last year.

The main reason behind the pronounced drop in energy consumption in Germany is the sky-high oil price. The BP report notes that the six-year upward trend in the price of oil is the longest period of price rises of that commodity since the start of industrialization. In fact, over the last decade the US benchmark oil price has increased 12-fold.

Across the world, total primary energy consumption rose 2.4 percent last year. China, which in 2007 consumed 7.7 percent more energy than in 2006, is responsible for half that increase; India a third. Overall, energy consumption in emerging economies rose by 5.5 percent. By contrast, European Union member states managed to cut their use of primary energy by 2.2 percent. The US, however, consumed 1.7 percent more energy in 2007 than in the previous year.

According to BP, the world consumed slightly more oil last year than in 2006, with total global oil use rising by 1.1 percent. However China and India recorded far higher rises, of 4.1 percent and 6.7 percent respectively.

But the energy source whose use increased most last year was coal, with the world consuming 4.5 percent more coal in 2007 than in 2006. Once again, China, whose coal consumption went up by 8 percent, was responsible for the biggest increase.