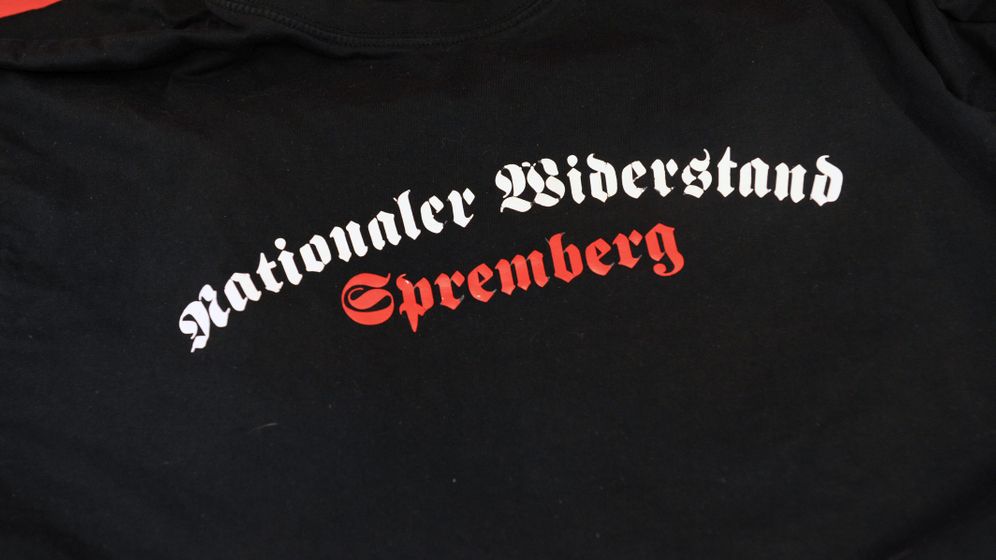 Photo Gallery: Finding the Neo-Nazis Among Us

Olaf Lücke, the somewhat heavyset managing director of the Hotel and Restaurant Association in the eastern German state of Brandenburg, briefly tells the "Story of Grünheide," as a way of illustrating the problems his industry faces.

In Grünheide, just outside Berlin, there is an establishment called the Hotel Seegarten. One day, the owner received an inquiry from a "wine agency" interested in renting space for a conference in January 2012. The hotelier was thrilled, because winters are typically slow. When the friendly men from the "wine agency," about 100 of them, turned up at the hotel in mid-January, there was something odd about the whole thing: They were accompanied by police vans. Even more unusual was the fact that no one talked about wine, and that everything became very political.

It turned out that the friendly men were from the right-wing extremist National Democratic Party of Germany (NPD). The whole thing was exceedingly unpleasant for the hotelier, who suddenly found himself with more than 100 neo-Nazis in his hotel. What to do? Throw them all out? If he did, he stood the chance of being sued for damages.

And so he did nothing, and the NPD's Saxony state association held its New Year's reception at the Hotel Seegarten. The incident caused quite a stir in Grünheide, and when it was all over the question on everyone's mind was how to prevent this sort of thing from happening in the future. In other words: How does a hotel or restaurant keep itself Nazi-free in Brandenburg?

Olaf Lücke, the man from the hotel association, taps his finger on a small brochure on the table in front of him. "All restaurateurs and innkeepers will now receive this set of guidelines," says Lücke. Martina Münch, the state's education minister, is sitting next to him. "One doesn't have to cater to right-wing extremists," says Münch.

But to avoid catering to right-wing extremists, you have to be able to recognize them in the first place. That's where the brochure that Lücke and Münch are presenting at the Potsdam State Chancellery comes in. It's called: "How Not to Be Fooled by Right-Wing Extremists: A Guide for the Hotel and Restaurant Industry."

On pages 6 and 7, there is a list of symbols -- some more obscure than others -- to help users identify neo-Nazis more effectively. The Gau triangle, for example, was a black triangular patch used during the Nazi era to identify the wearer as a member of a specific sub-group of a party organization. They have been banned in Germany since 2002. Other symbols include the "black sun," the "triskele," the "negative swastika" and the "inverted swastika."

Brandenburg innkeepers suddenly have a lot to learn. In addition to bookkeeping and kitchen hygiene courses, they must now know the ins and outs of the ancient runic alphabet and other Germanic symbols.

The "regular holidays of the right-wing extremist community" are described on page 11. According to the list, hotel bookings for January 18 should be viewed with suspicion, because it's the day neo-Nazis celebrate the "founding of the German Reich, on January 18, 1871." Another day to be aware of is February 15, which marked the "beginning of the bombardment of Cottbus (a city in Brandenburg) by the Allies." There's also September 24, the "anniversary of the death of Ian Stuart Donaldson, founder of Blood and Honour."

The plunge into arcana is unavoidable. Neo-Nazis, after all, can hardly be expected to be open about their connections. They won't show up at the front desk and say: "Heil Hitler, my friends and I would like a couple of nonsmoking rooms for the German people, the Reich and the Führer!" Even if it would make things easier.


Hotel association director Lücke mentions "straw men" who make the reservations. There are right-wing extremist organizations with unassuming names like the "Society for History and Culture." But, most of all, the legal situation is unclear. Can a hotelier throw out right-wing extremist guests? Or simply refuse them entry in the first place?

The Federal Court of Justice (BGH) set a precedent in a ruling it issued in March. Former NPD leader Udo Voigt had booked a room at a Brandenburg spa hotel, hoping to spend a few days relaxing. Before he even arrived at the hotel, however, he was informed that he had been banned from the premises. Is this legal?

In its ruling, the BGH argued that hoteliers could reject right-wing extremists as guests because of their political views. But a hotelier is obligated to honor a booking once it has been confirmed, except in extraordinary circumstances, such as when the guests are creating a disturbance or are engaged in agitation. This was not the case with former NPD leader Voigt.

"Civil courage is necessary," says state Education Minister Münch. "You have to take a stand," says Lücke, scratching his head.

The guide provides many suggestions for wording to use in contracts and cancellation clauses. In the end, however, one has the impression that the hoteliers are left more or less on their own, armed only with the courage of their convictions.

The NPD is a registered party. Police officers protect right-wing extremist demonstrations. Regrettably, the NPD cannot be banned, for a wide range of reasons, say German politicians. The result is that NPD politicians also hold seats in some German state parliaments. Yet hoteliers in Brandenburg -- more or less on their own -- are expected to prevent people like Udo Voigt from relaxing in their saunas, out of their own civil courage.

"The guide won't solve the problem," says hotel association director Lücke, as he packs up his things.

4 Bilder Photo Gallery: Finding the Neo-Nazis Among Us 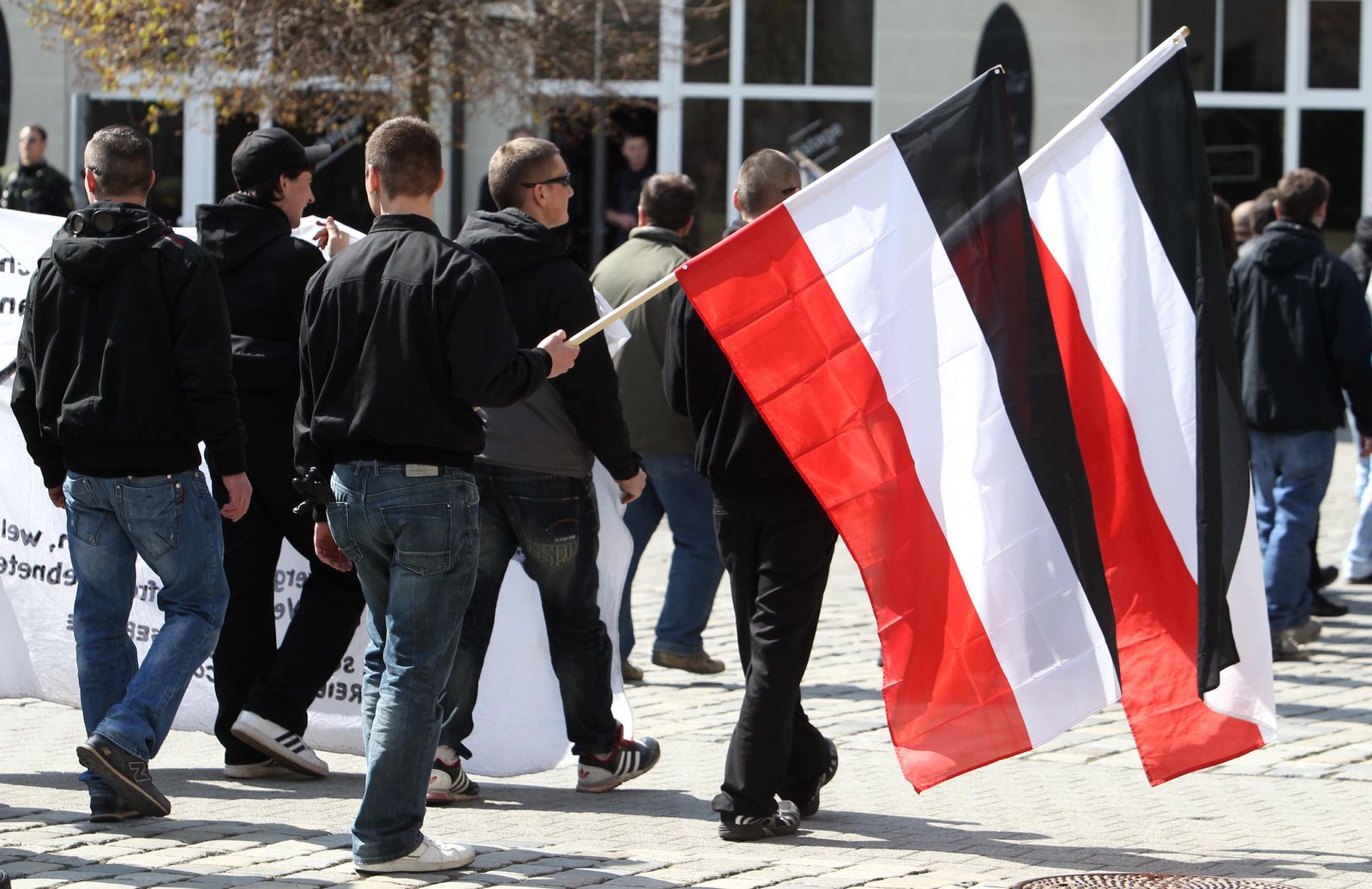 The brochure details several of the more obscure signs and runes used by neo-Nazis. Some are more obvious than others.