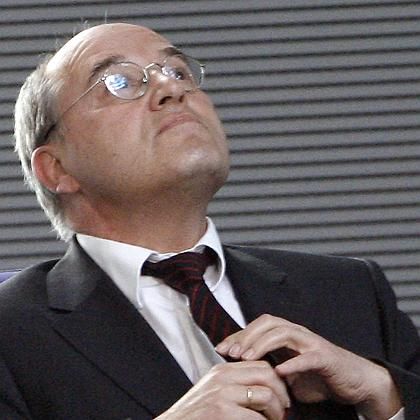 Gregor Gysi, seen here during Wednesday's Bundestag debate, is under pressure to resign over allegations he was a Stasi informer.

A leading member of Germany's far-left Left Party is fighting for his career amid renewed allegations that he worked as an informer for East Germany's infamous secret police, the Stasi.

The German parliament, the Bundestag, held a heated debate Wednesday about accusations that Left Party floor leader Gregor Gysi, 60, worked as a so-called "unofficial collaborator" for the Stasi. Gysi, who is one of the Left Party's best-known members, worked as a lawyer in East Germany. The debate was called after the head of the Stasi archive claimed that files show Gysi had spied on his clients on behalf of the secret police.

Members of Germany's other main parties -- the conservative Christian Democratic Union, the center-left Social Democrats, the business-friendly Free Democratic Party and the Greens -- called Wednesday for Gysi to take measures in response to the allegations, with some calling for Gysi's resignation. SPD politician Stephan Hilsberg said it was intolerable how Gysi was lying in public.

Gysi, who turned up late for the Bundestag debate and sat at the back of the room instead of in his usual seat, defended himself in a speech where he described the debate as a "tragic spectacle." He accused his opponents of wanting to attack him for political ends, in order to damage the Left Party.

The current allegations center around documents from the Stasi archives, the BStU. The archive head, Marianne Birthler, told the German television station ARD on Wednesday morning that certain Stasi documents describe an informer who "according to the documents, can only be Gregor Gysi."

The documents stem from the year 1979 and concern meetings between Gysi (pronounced "Geezy") and his then client, East German dissident Robert Havemann. The Stasi records describe a car journey which occured after Gysi had paid a visit to Havemann. According to the Stasi file, the passengers in the car were a 19-year-old author and an unidentified person who the record refers to as an "IM," using the German abbreviation for "unofficial collaborator." The author, identified as "Erwin" in the Stasi file, was Thomas Erwin, an East German dissident who is now a painter who goes by the name Thomas Klingenstein. Klingenstein has said that Gysi was the other man in the car.

Gysi emphasized Wednesday that the only contact he had with the East German authorities on behalf of Havemann was with the Central Committee of the ruling Socialist Unity Party (SED). "You have absolutely no idea about the life of a lawyer in East Germany," Gysi told the parliament. He said that his health has suffered as a result of the Stasi accusations. Gysi suffered a heart attack in 2004 and also underwent brain surgery that same year.

The head of the Left Party, Oskar Lafontaine, spoke out in Gysi's defense. Lafontaine called on German Chancellor Angela Merkel to remove Birthler from her office, claiming that Birthler was misusing her position to attack the Left Party.

Gysi also received support in the media from the families of his former clients. Havemann's son Florian told a German regional daily that Gysi was able to reduce the persecution of his father. The son of another East German dissident represented by Gysi, Rudolf Bahro, also defended Gysi. Andrej Bahro told the German news agency DPA that Wednesday's debate was "a tribunal unlike any other I have ever seen in the Bundestag" and called it a bad day for democracy.

Gysi has been surrounded for years by allegations of being a Stasi informer, which he has always denied. As well as the latest allegations, additional information seeming to impugn Gysi can be found in the Stasi file of his father, Klaus Gysi, who was a government minister in East Germany. According to a Stasi record dated February 16, 1978: "Comrade G. implied that his son, Gregor G., would like to make contact with our organization."

Soon afterwards, Stasi records begin to refer to an informer with the provisional codename "Gregor" and cite "Source: IM Gregor" as supplying information about Rudolf Bahro and Robert Havemann.

There are also internal Stasi lists from the period which detail visitors to Robert Havemann, with a description of each individual given after each name. In the list from Oct. 8, 1979, the description "IM" can be seen after the name "Dr. Gysi, Gregor."

Gysi has repeatedly denied working for the Stasi. He claims that the Stasi decided in 1986 that he was not a suitable informer and never tried to win him over as a collaborator.

Gysi has always defended his reputation vigorously against the allegations. He threatened legal action against the original DVD version of the Oscar-winning film "The Lives of Others," which tells the story of a dissident playwright who is under observation by the Stasi. The DVD was removed from shelves until the original audio commentary, in which director Florian Henckel von Donnersmarck claimed that the Stasi archive incriminates Gysi, was changed.

The Stasi infiltrated nearly every aspect of life in the GDR. Its network of professional and civilian spies monitored and collected information on large swathes of the population. According to a recent report, 189,000 people were working as informers for the Stasi when East Germany collapsed in 1989 -- 15,000 more than previous studies had suggested.

The Left Party has been hampered by its connections to the East German government. The party was founded in 2007 as the result of a merger between the Party of Democratic Socialism (PDS), which was the successor party to East Germany's SED and was headed by Gysi, and the WASG, a party founded in 2005 by disgruntled former SPD members, most of whom were based in western Germany. The Left Party has been doing well recently in state elections.

Correction Appended: A correction has been made to this text. Through a translation error, SPIEGEL ONLINE incorrectly stated that Stasi files said Robert Havemann was in the car during the journey made after a visit by Gysi to Havemann. In fact, there were only two passengers in the car, Thomas Erwin and an unidentified person who the record refers to as an "IM."

With reporting by Severin Weiland and Peter Wensierski