Investigators with Germany's Federal Prosecutor's Office and Federal Criminal Police Office have made an important step towards resolving the 2007 murder of police officer Michèle Kiesewetter in the southern city of Heilbronn.

It was already believed that she was likely murdered by members of a neo-Nazi terror cell linked to the killing of nine small business owners across Germany, mostly of Turkish descent. But SPIEGEL has learned that police recently detected blood on a pair of sweat pants found in the last apartment where the group, who called themselves the National Socialist Underground(NSU), hid out in the city of Zwickau in eastern Germany. DNA tests on the clothing conducted by forensics experts confirmed with a high certainty that it was Kiesewetter's blood.

Investigators also found two used tissues in the pockets that contained DNA traces from NSU terrorist Uwe Mundlos. After robbing a bank in Eisenach in eastern Germany in November, Mundlos and his accomplice and fellow NSU member Uwe Böhnhardt committed suicide in a trailer.

Hundreds of Pieces of Evidence

The DNA traces add to circumstantial evidence already gathered by investigators in the case. Police also found both Kiesewetter's service weapon, as well as that of her seriously injured colleague Martin A., at the home in Zwickau where the NSU had been hiding out.

The two police officers were attacked from behind in their police car in Heilbronn in the southern state of Baden-Württemburg in 2007. The perpetrators shot each of them in the head once. Investigators later found weapons used for the crime -- Tokarev TT 33 and Radom semi-automatic pistols -- in the Zwickau home along with other equipment stolen from the police.

From the very beginning, investigators believed that the culprits must have somehow come into contact with the blood of their victims. It remains unclear today why the perpetrators would have kept that clothing and the weapons years after the crime took place. One of the investigators' theories is that the group may have kept the objects as trophies.

After the deaths of Böhnhardt and Mundlos, their alleged accomplice Beate Zschäpe -- the only living NSU suspect who is currently in police custody -- set fire to their shared apartment in Zwickau. But she didn't succeed in burning the entire house down, and hundreds of pieces of evidence of the terrorist group's apparent crimes were recovered.

The uncovering of the far-right terrorist group in November 2011 triggered renewed debate in Germany about action the government could take to curb right-wing extremist activities, including repeated calls to ban the National Democratic Party. Although not directly linked to the NSU, the NPD is a party that promotes radical ideology, including "racism, anti-Semitic and revisionist" thinking, according to the German government agency responsible for monitoring extremist activity in the country. The party also holds seats in the state parliaments of the states of Saxony and Mecklenburg-Western Pomerania, as well as numerous municipalities, mostly in states that belonged to former East Germany.

Over the weekend, the governor of Bavaria in southern Germany, Horst Seehofer, called for a new petition to ban the NPD. Seehofer is the head of the Christian Social Union, the sister party to Chancellor Angela Merkel's conservative Christian Democratic Union.

"I would do everything I could to ensure that a new case was brought -- with good material and a good basis," the CSU party leader told Germany's Welt am Sonntag newspaper. He is also encouraging other powerful governors to join together and bring forward a case, even if the federal government doesn't pursue a ban. Not bringing another case, he warned, "would strengthen the right-wing extremist scene."

Germany's highest court rejected a petition to ban the party in 2003 after it determined that the government had informants at the highest levels of the NPD. The slap in the face to the government at the time has led Merkel to be extra cautious about calls to ban the party, a stance she reiterated on Monday.

Speaking through her spokesman Steffen Seibert, Merkel said a case to ban the party had to be "very well founded."

"It cannot fail for a second time at the Federal Constitutional Court," he said. Seibert added that although he believed the party violated the German constitution and was both xenophobic and anti-Semitic, it "could be fought using political means." 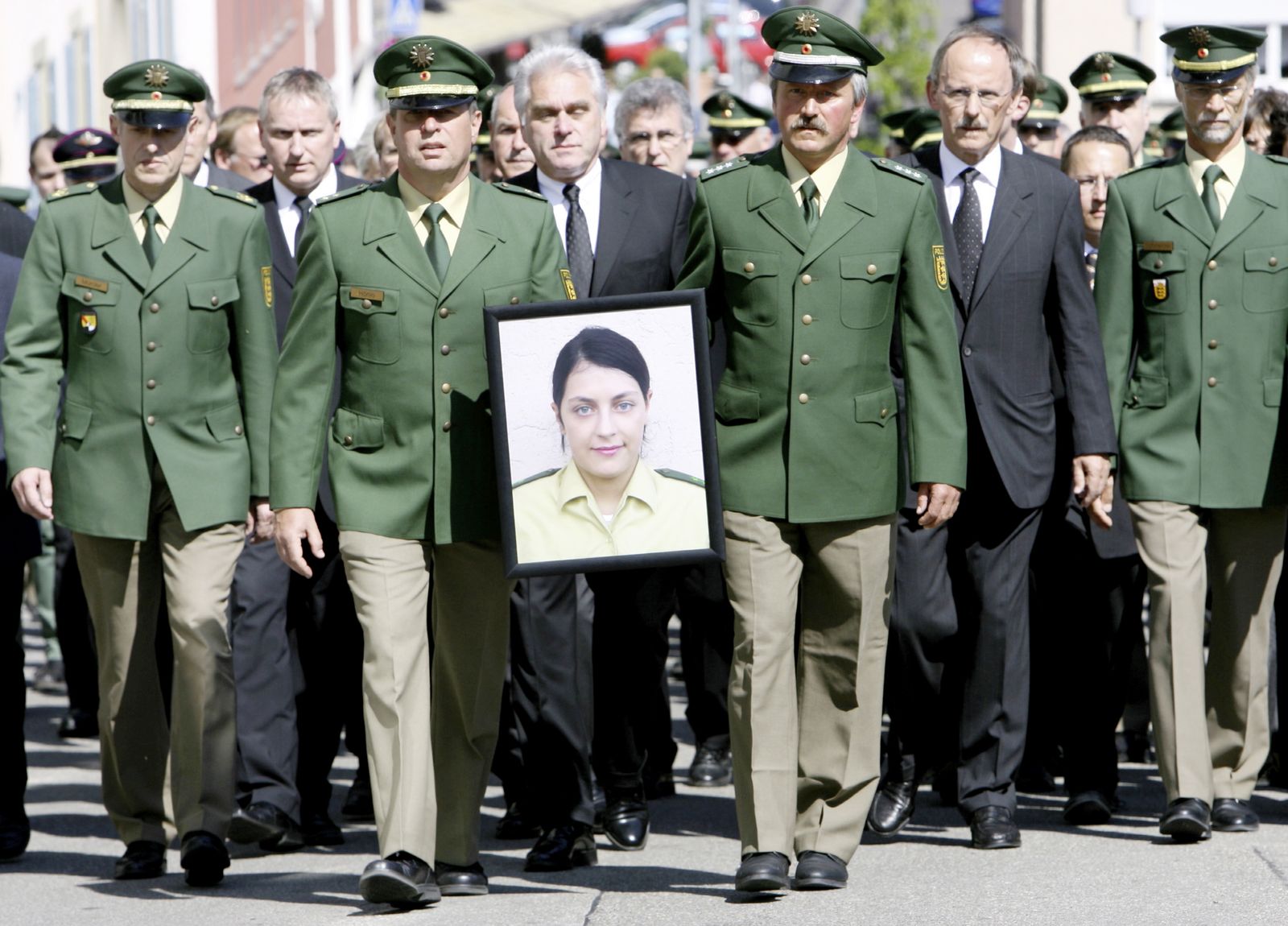 Police in a funeral march for murdered police officer Michèle Kiesewetter in April 2007.