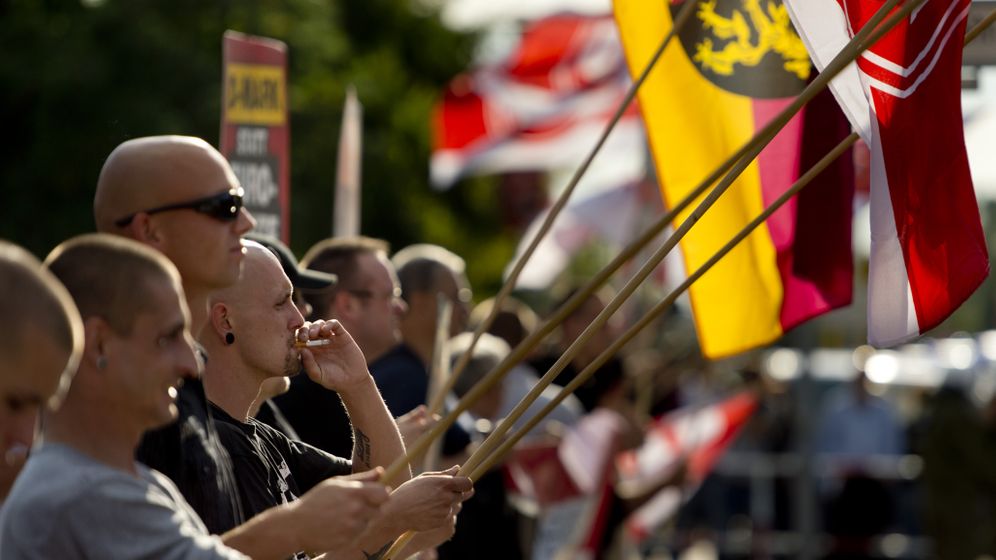 A heavy police presence ensured the latest round of protest and counter-protest over a new shelter for asylum seekers in a poor district of Berlin passed off relatively peacefully. After previous demonstrations in Hellersdorf last Tuesday left a policeman seriously injured, some 400 officers flooded the streets around Alice-Salomon Square on Saturday and separated the two sides with protective fencing.

The new shelter on Carola-Neher Street has been seized upon by the far-right National Democratic Party of Germany (NPD), eager to exploit the fears of residents ahead of the country's general election in September.

The NPD demonstration attracted around 150 people, while more than 700 turned out for the counter protest including representatives from the Left Party, the Social Democratic Party (SPD) and the Greens. The 400 officers present was an increase on the 250 who were on duty last week, a day after the first refugees moved into the shelter, when a policeman with more than 30 years service broke his cheekbone in several places after being struck in the face by a bottle reportedly thrown by one of the counter-demonstrators. The injuries were severe enough to cause concerns that he might lose his eyesight, according to police spokesman Stefan Redlich.

The result of the expanded police presence was a more peaceful day on Saturday, with only a handful of arrests being made for suspected offenses including resisting an officer and breach of the peace, a police spokeswoman said on Sunday morning.

The protests are just the latest clash over the rapidly rising numbers of asylum seekers in Germany and the urgent need to find them shelter. This year has seen the most refugees seeking asylum in Germany since 1999, with the total for 2013 expected to top 100,000. According to the Federal Office of Migration and Refugees, 43,000 people sought asylum in Germany in the first six months of the year, an increase of 86.5 percent compared to the first half of 2012.

This has led to pressure on the authorities to find enough accommodation for asylum seekers - such as in the former school at the center of the current protests. But some of those who did move in have already fled in fear.

And the NPD has used the situation to find success in its campaign to woo residents who hold reservations about the arrival of some 200 refugees from Syria, Afghanistan and elsewhere at the newly-opened shelter. One 36-year-old woman who attended the NPD rally, who wanted to remain anonymous, said that it was her first time at such an event - and that she plans to vote for them next month. A single mother-of-three, she says she has no friends or acquaintances in the NPD, but that they "speak to me from the soul". She has been waiting a long time for a nursery place while asylum seekers would have had their accommodation sorted out in no time.

'I Have Nothing Against Refugees'

"Actually, I have nothing against the refugees," she says; rather, she is upset with the politicians who didn't ask for her opinion on the shelter.

The problems in Hellersdorf have played into the hands of the NPD, which has altered its election strategy specifically to take full advantage of the situation by stoking the fears surrounding the asylum seekers - and in people such as this woman, they have met with success.

Just a few meters away, standing amidst the counter-demonstrators, Greens parliamentary group leader Künast said it was important for people to show their faces in Hellersdorf to make it clear to right-wing extremists that they have no place there. "The incitement against refugees, we cannot allow it." That slogans used by the far right are so prevalent in the local populace was extremely dangerous, Künast added, which is why the counter-protests are so important.

Petra Pau of the Left Party, meanwhile, knows the people in Hellersdorf well - they voted her into the Bundestag, the German parliament's lower house. She only wishes for one thing for the residents and asylum seekers: peace. The ongoing protests on the streets simply ensure that no one's life can continue as normal, she said.

But that is exactly what the NPD wants. Some of the party's bigwigs, including long-time former leader Udo Voigt, showed up for Saturday's demo on the Alice-Salomon Square. They used slogans like "Stop the asylum flood" and "Live safe: stop the asylum policy". Voigt was met with boos and middle fingers, but unlike the previous Tuesday, the NPD members were not alone, with residents coming along to applaud the speakers.

Among those was Ronny Zasowk, deputy chairman of the NPD in the state of Brandenburg, who said: "There must be no more mass immigration." He railed against "welfare niggers" as he talked himself into a rage: "We will follow this path until the last asylum home is closed."

But the hate speech is not the real danger. The NPD's leader in Berlin, Sebastian Schmidtke, plays the role of the concerned politician, the worrier. "We will help you," he promises the citizens of Hellersdorf. His partner Maria Fank, meanwhile, the state chairwoman of the NPD women's organization, says: "The real refugees in Hellersdorf are the Hellersdorfers themselves." It was a case, the 24-year-old said, of "offering protection to the poor, small children and the poor pensioners."

"The poor children", "the poor pensioners" - it is with phrases like these that the NPD has reached many residents in Hellersdorf.