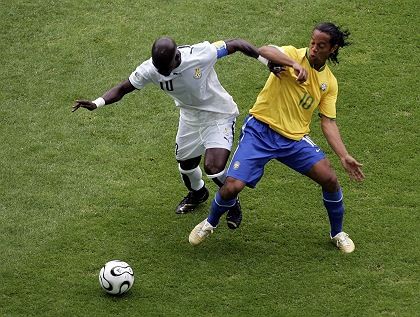 Stephen Appiah of Ghana and Ronaldinho of Brazil battle for the ball during the World Cup game in 2006. Now there are allegations that the Ghana players threw the game.

The German footballing world is reeling from yet more allegations of match-fixing, three years after a huge scandal led to the conviction of a crooked German referee. A report in the current issue of SPIEGEL focuses on a match during the World Cup that Germany hosted in 2006, as well as on two matches in the country's domestic soccer league.

The first allegation concerns a match between Brazil and Ghana, which Canadian investigative journalist Declan Hill says may have been manipulated by an Asian betting syndicate. Large sums of money were placed on Brazil winning the knock-out stage match by at least two goals. Ghana lost the match 3-0, putting Brazil through to the quarter finals.

According to Hill, who has won awards for his past work, a former Ghana international had acted as the middleman between Ghana's players and the head of a betting syndicate in Bangkok. Hill spent three years investigating the global connections of the betting mafia for his book "The Fix," the German edition of which comes out on Tuesday. He told SPIEGEL that he is "playing with fire" by investigating this criminal underworld.

Anthony Baffore, Ghana's team manager during the 2006 World Cup has, however, dismissed the allegations. He told Die Welt newspaper that he "could not imagine" any player being involved in such a scheme. "I was with the team daily and did not hear of any arrangements," he said in comments published on Monday. He added that the sum of $30,000 allegedly offered to the players was less than the sum the footballers would have been paid if they had beaten Brazil. "No one would betray their country for that," he said.

Meanwhile, Germany's two main football bodies are taking the other allegations of match-fixing very seriously. The German Football Association (DFB) and the German Football League (DFL) announced on Saturday they are launching an investigation into claims that large sums of money were placed on league games by a Malaysian man who has since been convicted of fixing other games.

A SPIEGEL investigation indicates that two matches in Germany's professional league are suspicious. According to SPIEGEL, William Bee Wah Lim placed €2.8 million on Kaiserslautern FC losing a match against Hanover 96 on Nov. 26, 2005. Hanover won 5:1 and Lim reaped €2.2 million from his bets. Lim also wagered €4 million that Karlsruhe SC would beat Sportfreunde Siegen in a second-division match on Aug. 7, 2005. Karlsruhe won the game 2:0.

According to SPIEGEL, there are indications that Lim had personal contacts with players in the teams of Kaiserslautern, Karlsruhe and Sportfreunde Siegen. All the players insist they are innocent.

In June 2007 Lim was convicted of attempted match-fixing involving other games in Germany's regional league and Austria's first division. He was sentenced to two years and five months but was released on bail but has since fled the country. A warrant for his arrest was issued in January.

The DFB and DFL released a joint press statement on Saturday stating that they will investigate the SPIEGEL allegations, although they said that they were not aware of any indications that the matches had been manipulated. The two organizations have asked the Swiss company Sportradar, which monitors matches, to look into the case.

The report comes three years after German football was rocked by the scandal surrounding referee Robert Hoyzer, who was convicted of fixing a series of games and sentenced to two years and five months for his crime.